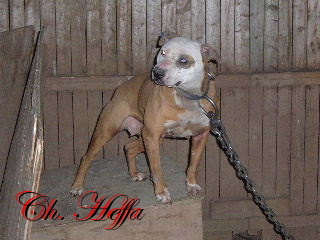 Like I always enjoy doing, we will start on this small tribute by pointing out some of the Bulldogs in the pedigree which made this game dog worthy of mentioning in the history books. We can start by looking at Von’s “Zachariah”, he comes from a long line of game dogs which can be found in many of our great dog’s pedigrees. Zacharaih was a son of Boyles Ch “Bolt Action” (ROM); who was out of Grand Champion “Cherokee Chief” (ROM) and Boyle’s “Dirty Mary”. This champion Bolt action was a littermate to Hendry B’s Ch. “Mr. Rogers”, Lee’s Ch. “Reno” (ROM) amongst others. Champion Bolt Action lost his last match dead game in 1:16. Old Zacharaih sure is related to some well known Bulldogs, which is definitely not to shabby hey? Now let us look at some of what old Zacharaih was able to produce. When he was bred to a close related bitch named Scoates “Hail Mary”, he produced Troubles’s Ch. “Black Bart” (3X). When bred to Scoate’s “Eclipse” he produced Cockran’s “Timex” (Sire of Scooter’s Ch. “Emmit”. Let’s not forget about Stricktly Business’s Ch. “Chino” when he was bred to Mann’s “Crazy Tippi”. Champion Chino won over Latino Family’s “Gator”, second to none Polo and Steel Reel Kennel’s “House”. Zachariah has, I am sure, produced more champions, but this is the ones I have record on.

Taking a look at Mann’s Crazy Tippi” (ROM) we can see that she is closely related to Zacharaih. Crazy Tippi was out of Hendry B’s Ch. “Mr. Rogers” and Abraham’s Gr.Ch. “Queen of Hearts” as we already mentioned earlier Champion Mr. Rogers was a belly brother to Champion Bolt action (ROM) (Sire of Zacharaih). Mann’s Crazy Tippi produced Rep’s Ch. “Blazzard” and Desert Warrior’s Ch. “Commanche”, when she was bred to Hall’s Gr. Ch. “Andy Capp” (ROM), and of course Ch “Chino” when bred to Zacharaih. Keeping going we get to Grand Champion Buster Brown, he was a son of Grand Champion Buck bred to Jersey Boys’s “Crystal”. No doubt most of us know who Grand Champion Buck was. But for those who do not know he was the one who beat Grand Champion “Sandman” in over 3 hours. Old Grand Champion “Buster Brown” was a true Bulldog and he produced some show dogs himself. One of these dogs that come to mind is Back Street Truez’s Ch. “Dirty Jersy” (3x) (1xL). Now lets take a look at Heffa’s sire Champion Chino, who’s record was mentioned earlier. He produced himself another Champion, she was the devastating little gyp known as J. Damager’s Ch. “Pandi”. She was a small little gyp who beat Tri-State Kennel’s “Red”, Biohazard’s “Candy” and Cash Money’s “Little Hoochie”, and none lasted past thirty-seven minutes. Unfortunately I am not familiar with Miss Piggy or her career or her litter mates. But without a doubt she is well bred and obviously has produced something worth feeding. Looking at Champion Heffa’s record we see that for her first she was shown at 33 ½ pounds, her opponent was Danger Boys’s “Mary”. The referee was Strickly Business and her first was over in thirty-three minutes. Her second was a little lighter, she was contracted at 32 pounds and Krazy Side Kennels brought a little warrior called “Gitit Girl”, the referee was Kid Carpenter and he declared Heffa the winner in only twenty-seven minutes, even faster than her first. Her championship was to be a battle or so it was thought to be. Her opponent was Brick City’s “Ms. Rooster” 91X)(Jeep/Rascal cross) The weight was again 32 pounds and the referee again KidCarpenter. Heffa was conditioned and handled by Showbizz. This show was over at 32 minutes, a minute a pound. When Rooster made a deep game attempt to scratch, but just could not complete it, she was counted out. 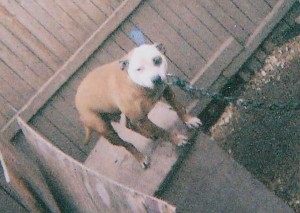 No doubt this little bitch has got what it takes to win anywhere in the world. She is obviously a true

representative of her pedigree. Now for those who are wondering what she can produce? The answer is yes. I am only aware of one of her offspring and so I will make mention of him here. This little Heffa is the dam of
Size-Up Kennel’s Ch. “Gang-Green”. A little warrior who won over Overload’s “Heizman” in 32 minutes,
North-n-South’s “Lil Rascal” in 55 minutes and Hardline’s “red Alert” in 30 minutes. Champion Gang-Green’s sire is Keep it Real’s “Doc”, who was closely related to Champion Heffa, through Champion Commanche and Champion Reno (ROM). I am sure we all will hear more about this little champion called heffa and her family. Till then remember to study what is behind your dogs, so you can truly understand why they are so good and in some case so bad… Please Keep your little ones scratching, cull when necessary, and most importantly, be careful who you allow in your circle of associates. Till Next time. PS. As I was putting this article together for you guys, I received information that Size-up Kennel’s “gang Green” lost to Corp Kernnel’s “A/C” for A/C’s grand Championship title. Now Size-up kennels has hooked there Dog of the Year Grand Champion “Awesome Beast against Grand Champion “A/C”. So stay tuned……….Scratch to win!!