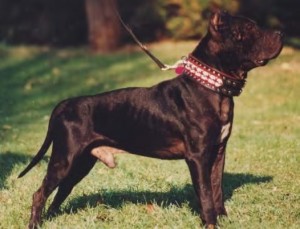 Many great and well known dogs are combined inseparable with their breeder or owner, Zettler’s MOSES is probably the most known dog off of our breeding. He is from the breeding Raging Bull (Rushin) LITTLE ROCK x ZW DEBBIE. DEBBIE was off of CHINA’S first litter, when bred to Ch. SCALLYWAG. We sold her as a pup to a friend of us. DEBBIE was a calm, well balanced and hard female, being very similar to her dam CHINA. She was never matched, but tested hard. In an accident she showed that she could bear a lot. Her owner drove back his jeep and didn’t realize that she stood behind the car. He ran over and broke her both legs. Without any help she jumped into the car for going to the vet. When he wanted to breed her, he addressed to us, for we should help him with the search for a suitable male. We asked Bros Knls in Holland and they brought us into contact with Raging Bull Knls. Bros told us that Raging Bull would own a dog called LITTLE ROCK having won once and lost once almost dead game (other sources state that he had lost once, but would be an extreme game dog).  Originally LITTLE ROCK was imported from Rushin Knl. by Bros, as he showed nothing, they gave him to Pedro from the Country Boys, and as it turned out, LITTLE ROCK was a late starter, later he came to Raging Bull. In this match his opponent had „peeled off skin and flesh from the nose to the eyes, and the remaining skin was clapped over the eyes. LITTLE ROCK only could see through a hole of the skin-rags, nevertheless he scratched without hesitating until he was picked up. In Holland he was denoted as the „only living dead game dog”. As we liked his pedigree and performance, we went to  breed with DEBBIE. When we arrived at Raging Bull’s he asked us, if we knew, what we would expect. We affirmed and he let LITTLE ROCK out of his shed, where he was housing. Now, we had been warned of, but we hadn’t expected what came out. There was only left the bone from LITTLE ROCK’S muzzle, no nostrils, no flews, only the naked bone! I was used somehow through my uncle, who was a butcher, and through my hunting activities, however, I felt a pang when I saw him!  The breeding LITTLE ROCK to DEBBIE worked and produced beside MOSES ADI, a red dog with a black mask, being very similar to his sire LITTLE ROCK, he was sold as a pup in Austria and later might have come to Hungary; MOLLIE, lxw in 0:47; TREVOR, he was smaller, faster, about 44 lbs, with a real hard mouth and was tested several times shortly, once in the presence of Rocca, as mentioned in his book. His life was short, he was shot by an overzealous huntsman. From the litter we got six pups for raising and for sale. Out of the four pups we wanted to keep one for ourselves. A friend had chosen MOSES at a rather young age and already had made a deposit. Primarily MOSES was rather inconspicuous,  but soon showed better day by day, therefore we tried to offer our friend instead of MOSES one of his belly brothers. However, he remained with his choice, and having promised that dog, we kept our word. At the age of 9 months MOSES and TURBO (Zw TONI x Jansen’s HEXE) had a terrible kennel fight, when their owner was absent. When he returned home, both dogs laid there more dead than living. When we saw the photos, having been shot shortly after that, we were convinced that probably a good dog would have been ruined. However, MOSES was the exception of the rule. Some months later when he was rolled, it proved that incident hadn’t mattered him at all. DEBBIE’S belly sister GYPSY had  been sold to Hungary. Due to her and her offsprings, dogs out ouf CHINA had already a good reputation in Hungary. Some Hungarians asked for some dogs out of CHINA they wanted to buy, this time we hadn’t such a litter, but told them from  MOSES. Although MOSES was only 18 months old, they wanted to buy him in any case. Primarily his owner refused. It went back and forth till they could acquire MOSES from him finally. With that MOSES’ career started in Hungary where he won six contract matches, his pit weight being 59lbs: 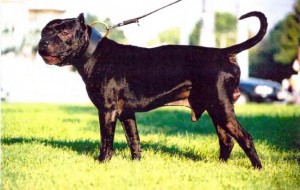 Before MOSES went to Hungary, we bred him to his granddam CHINA, this breeding produced Peace Kennels’ CH FRANKIE, staying also in Hungary. As always, there exist different opinions about his value as a stud. Some believe in him, others again state that he produces nothing. Like every other stud MOSES produced and his share of good and less good dogs. However, you can find his offsprings not only in Hungary, but also in Slovakia, Czechia, Yugoslavia and even in Southern Italy. Already staying in Hungary, Moses produced the following dogs: 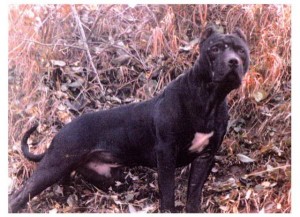