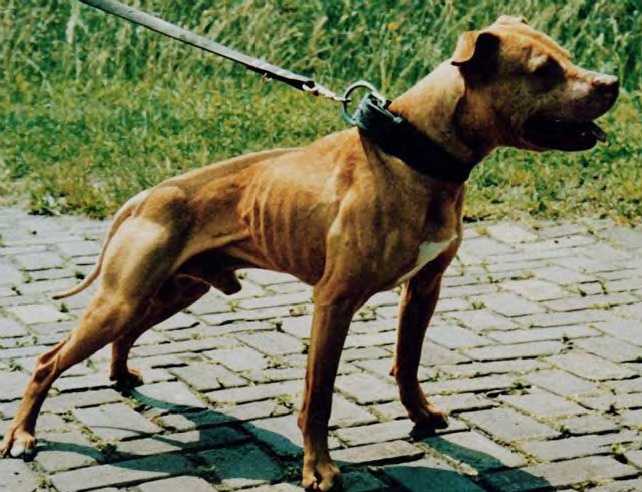 I would like to tell you and the others the story of a dog that was destined to be a house-dog, but as the story tells, it comes off somewhat different. He was born at the kennels of the Bros Boys in 1987, Bros sold the puppy to a guy who needed a dog as companion and guard, and as so many over here, he sure liked the dog with some big name on the papers. After a few years, the guy wanted to get rid of the dog, because his dog “playfully” killed some dogs in the streets. After he’d sold him back to Bros and staying there for awhile, Bros put this dog on the real stuff, showing promising, as he handled all with ease, showing to be a long winded dog with plenty ability and pit smart too. Shortly after that, I bought the dog very cheap, maybe they felt sorry for me, because I had no success with the dogs, and they just wanted to give me a little help.

Blinky – as Bros called him – was a beautiful rednose with near perfect conformation and looking very much like his famous sire. At that time, I contacted several well-known fanciers trying to match into them, but for one reason or another, I had no success. After awhile, I got a call from Scarface Bros, and he said he had contracted me into J. B. and G., we then agreed on weight and other things. I knew of the reputation of these guys, as they always come with a real good dog and not with someone. As the keep went smoothly and the dog grew stronger each day, I became a little bit more confident, because it was the first time for me to put a dog in shape, but with the help of Bros, I went through it without serious problems. On the agreed day, J. B. and G. were there with their Chester dog, sired by Mr. Bulldog’s Ch. Spike and the Tug bitch, and both dogs on weight. The fight can be described as a one-sided affair, as Blinky was the aggressor and drove Chester constantly into the walls, very fast moving and punishing Chester heavy in the front end. After 1:23, J. B. picked up his dog to save him, but it was too late.

After some time, the Ravotboys, real dogmen, who never shy away and take in every challenge, challenged me. They thought high of their dog, because he showed so well in his rolls, a very well bred dog, sired by Ch. Ben (Anderson’s Buck x Bryant’s Pepper), a 4x winner, and out ofBros Hope (Rigg’s Red Boy x Patrick’s Lahoya), a 2x winner and real pit ace.

As the match came off, it was a somewhat different story, as Ben jr. threw Blinky on his back and kept him there for 20 min., all the while shaking him against the walls. However, Blinky stayed very cool just pacing himself, and at times did some hard mouth fighting, which seemed to discourage his opponent a little. After these 20 min., it was an even fight, in which Ben jr. was still hurting the chest and shoulders, and Blinky just riding the nose and, whenever he got a chance, to go back in the mouth, biting hard and staying there. At 50 min., Ben jr. had given all, and Blinky then was working on a down and defenseless dog, working deep in the throat, at 55 min. the Ravot picked his dog up to save him from further punishment. After that, both ran their courtesy scratches.

After these two impressive wins, there were some guys eager to match into me, as many said Blinky was the best dog at his weight on the continent, while these guys thought different, and yes, we need this kind of people to keep on going in this sport. I decided to go into a dog from Borderline Kennels, a dog imported from the USA, and out of Jesse Rod’s breeding, a son of Gr. Ch. Midnight. Stories were told that this dog would destroy his opponent in short order and had killed two dogs in rolls within 10 min.

After some investigations, it was clear, these stories were true and I realized -this was the very moment to show off my dog, and see my dog to show his true colors against a dog, which many thought he was an ace. Now he was going for his Championship and knowing what was laying ahead, I asked Roberto to take over the conditioning and he agreed much to my relieve, as Roberto is an experienced conditioner and very good of it. As time went, tensions grew higher, it was a much talked about match, in which both parties did heavy betting on the dogs and one guy even bet 500 that Little Man would destroy Blinky within 30 min. On fighting day, there were some twenty spectators gathered, and everybody knew this must be a real classic, as two very good dogs were going into each. The referee called the dogs to release and they hit each other in the mouth in the centre of the pit. And, oh boy, true to his reputation Little Man did some very hard mouth chewing and for the first time I heard my dog singing, at this very moment he lost two hangers and my confidence dropped down a little. 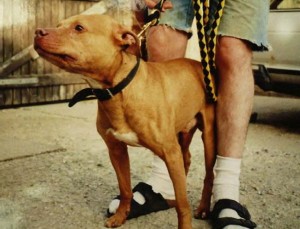 This dog had it all, very strong, very fast and a very hard bite, and Blinky just trying to side the head for this time, but the dog was too strong. He could not keep him off, he worked the stifle, front legs, the shoulders, biting hard, within minutes Blinky had lost both front legs, and I am remembering thinking, it is now just gameness and heart to stay awhile with this terrible alligator. However, one of the Bros who was standing next me said confidently, “I think this dog can take it all, and sure he comes back.” At that moment, it sounded crazy, because Blinky had already taken a real beating. After 20 min., the pace slowed down a little, and Blinky managed to stay more and more on the head or nose of Little Man, just to keep out of his way. The next two hours can be described as follows: Little Man is determined to get him out, but occasionally Little Man gets in and is working front legs and shoulders and then Blinky takes him off with a nose hold, but losing in process his lust cutters!! It was a strange sight Little Man moving forwards and Blinky on the nose moving backwards continuously sinking on his chest (because his front legs were badly hurt). Both ran their scratches without hesitating, but it takes Blinky a little more time to cross. At the two-hour mark, Little Man becomes slower noticeable and Blinky could work as Little Man seemed to be exhausted and without any interest, (I think he glided into a shock’s condition).Then both ran some further scratches and the crowd applauded. However, it was evident that Little Man had given all and got tired quickly, Blinky worked more and more on an exhausted and defenseless dog, he tried to give the other dog the rest. At 2:15, B. picked his dog up. This win made his sire, Bros Ch. Handsome, to a ROM dog (the first on the continent) – through his sons Ch. Sting, Ch. Ginger and Ch. Blinky. Shortly after his championship Blinky was offered for sale as his owner had some lack of money and was bought by the M&W Zwettler. The Zwettlers bred all their females to Blinky and he produced some outstanding dogs including Rushin Bill’s Miss Holland, Blinci, Dooley or Ch Gremlin etc. Finally, Blinky was sold to Goran Trisic who also used him extensively for stud purposes and produced more outstanding dogs like Ch Brick, Ch Trisic, Ch Crnka to name a few.