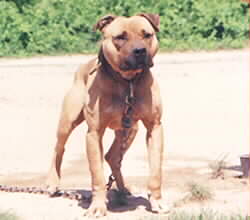 I had originally wanted a pup off of Ed & Chris from Bandit and another Gyp they had on the Yard. Well that breeding couldn’t be made, so they had to send me another one in replacement. With my authorization of course, This pup was out of the same Sire, their Bandit dog and the Dam of Roy was “Wildside’s Wild Cherry” knowing that I liked Eli dogs crossed with Snooty dogs they couldn’t have made a better choice for me.
I received Roy when he was a young pup around 10 weeks old, from that first day I knew he was a real Character. The weather was rather cold for that time of year in fact we had an early snow, so I decided to bring Roy inside. Well this lasted about a week! I could tell to try and housebreak this dog there was a good chance he would have been ruined before he hit the show circuit.
Roy took life on life’s terms and never really seemed to care one way or another. Since it was my Wife’s dog he did get a little extra now and then. Such as toys and time to play with them, I had to build the dog a ginny and Spring Pole for his amusement. So in essence by 10 months old Roy was being introduced to the tools of his trade which he took too well.
It was around this time that I decided to give him a taste of the four walls with a dog about 18 months old. He took to this as well as his toys. He did show lack of interest; not that he didn’t Scratch when he was supposing to or take hold, as a dog should. It was more like the interest a dog has to come out and play at 20 below freezing. They come out cuz they want to, such was Roy when he first met another dog.
The second time out Roy showed us that he had a lot of brains and handled himself quite well for 23 minutes. (He was 14 months old) I suppose that was the last of the easy times for Roy. His next three rolls were into bigger dogs then him (50lbs) nothing went under 40 minutes. In these rolls Roy had his foot broken, tendons in his Front legs torn for life and his legs would never be the same.
It was late August/93 I had lost a Match and was thinking about bringing Roy out to the circuit. I had some Prominent Dog people from East Texas up for a week and my friend told me He thought Roy was a Cur. I said maybe so but there doesn’t seem to be enough dogs on this Yard to make him quit. Well we set him down on the floor around midnight and he did 1:06, I decided I might as well pull him out. The next morning over coffee my friend said “You know, now would be the time to find out if he is a Cur or not.” Well we went back out to the Yard and got Roy, nine hours after doing 1:06 off chain. When I let Roy go, he came over as well as he physically could, took hold and proceeded to show he was not about to hang it up yet.
Well I told my friend to get back to me in a month and I would have his weight for him. In one month we had Rapid Roy Hooked at 45lbs into Kirkland & Faul. I Started my Keep in the crisp month of October, as the show was to be in November.

Roy was an easy dog to work as he had been using his tools for most of his life from 10 months on. After checking with my Vet and getting a clean bill of Health and a Health Certificate we were ready to travel in a week. My partner came over to visit and to get a few pictures of Roy before we left, he told me that he figured it was the last time he would see Roy alive, as he knew it would have to be one special reason before I would pick the dog up. When I left Canada the temperature was a nice 45 degrees. When I touched down in Houston it was 90 degrees. I had 3 days to accustom Roy to this drastic change, which was hard considering my entire feed program had to be changed to take in for the hot, humid air.
Show day we traveled about 6 hours to Louisiana today was the day for Roy to show us what he was all about. I heard I was going into a pretty physical dog with allot of mouth. My plan was to weather the Storm and hopefully Roy’s brains and Gameness would prevail, as we had no real mouth to speak of.
We were second to go off in a 5 dog show, many of the big names were there along with this Canadian, that not too many people knew other then the crowd I had traveled with. At weigh in we came at 44.5lbs the same as Roy’s opponent. Faul was handling Bossman, Kirkland was his second in my corner and I have to be honest I was more worked up then my Roy.
At the command Pit I released Roy and he went to business! Within 7 minutes of this Match you couldn’t get a $5.00 bet against Rapid Roy and the Canadian. He blew Bossman’s shoulder out with one bite and begins to go to work on the dog. This was the first time in Roy’s life he had the upper hand. I had a friend over in Faul’s corner and he yelled out “Shit that ain’t the same dog we rolled up in Canada!”
I have to say that Kirkland and Faul brought one Game Bulldog, fact is Bossman won “Gamest in Show” that night. We had passed the hour mark, Roy had run a bit hot in the first 20 minutes, but grabbed his wind back. Petie from Bleedwater was in my corner, and when I brought him in for the 30 seconds he would scatter everybody from the open door as I hauled Roy up in the air so he could get the cooler night air. I would have to say it was over 100 degrees in the Pit and Petie was more worried I was going to overheat then Roy. At 1:04 T.Grubs the Judge said, ” Well boys in case you’re wondering it’s been 1:04. Com’on Roy

let’s get this over with! I said. 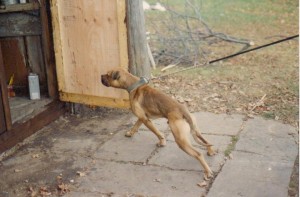 It was at this point Roy finally decided he was gonna be a Bulldog! He put the lower half of his jaw around the bottom of Bossman’s neck, upper jaw on the back of his neck and bit! There was a crack and Bossman straightened out and lost his bowels. He was stone cold dead! Roy continued to crunch on Bossman’s skull! Rapid Roy was declared the winner at 1:07.
There were some older Dogmen there that said “They haven’t seen mouth like that for years!” I must say I haven’t seen a finer Bulldog then Roy’s opponent either for awhile. This dog continued scratching to the face of death until he took his death. In closing Roy is now at WildSide Kennels, I don’t believe he should be matched again due to an accident he had up here in which he had to have an operation on his Salivary glands. This we believe may have caused Paralysis in his Jaw. Taking from him the once great mouth he had. When I think about what makes an Ace this is it:
A dog that loves to work
A dog that has no fear of crowds before he has even been with one
A dog that will travel anywhere and perform as he should
A dog that will kill his opponent for the want of killing him/her

Well Roy has all these qualities and more. I believe he will pass this on to his Offspring. I already have dogs out of him that to us seem to be much the same as him.