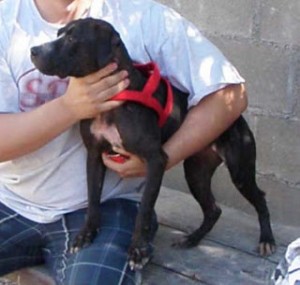 Cheyenne was born in a litter of 4 down from Blackrocks’ Tatis ROM and Cascudo a 2xw who belonged to the Guerreros’ and his breeders the Señores Garza. It’s worth mentioning that Blackrocks Kennels is not one person but made up of El Profe Ponce, Felix, Heman, Paquiao, Anuar, Mana, A-Town, Trompas, Juanito, Isak, Gera, Gera Jr and yours truly, Joyero.

Each person has an important function, and specifically for this case I would like to acknowledge Profe Ponce for his ability to raise these animals.He took care of Tatis, Cheyenne and almost all of Tatis’ offspring, giving them proper nutrition and care. In a few words he is the best at it, and is helped by Felix. After Cheyenne’s litter is weaned the Señores Garza keep 2 males, one being Ch.Cuco, and we kept a male and a female. From the time they were pups the female stood out, very active and restless, fighting all the time. 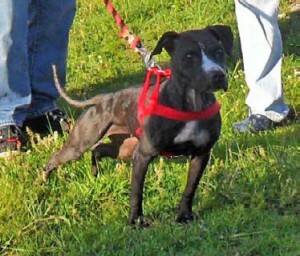 Cheyenne is rested for a few months because of a deep wound to her chest. We then hooked Cheyenne against Bernal from Mexico City who is a gentleman and good person with many years of experience as a dogman. She begins her keep for the show in Veracruz and with 3 weeks remaining the location is changed to Mexico State due to security issues. This changes my plans and I can’t make it so 15 days before the show I send her to my friend Jarocho to finish and handle her once again. With our luck, Cheyenne came into the square during her heat cycle once again. This time against a gyp that hit the face extremely hard, a daughter off of Jordan ROM to his sister Niña Mala. This time her cycle affected her more than her previous match and she got off to a slow start. At about 14 min things finally start to get serious and Cheyenne is having a hard time figuring out the smart muzzle style of her rival. But she finally gets her chance and destroys her in 1 hour making her leave the pit almost R.I.P.
Cheyenne took a lot of damage to her face but nothing too serious. Back safe at Blackrocks we begin to care for her in preparation to breed her but we were one step away from her Grand Championship when our friend Magaña calls and tells us there is a bad one Cheyenne’s weight. Magaña had a freak gyp that had killed one in 8 min at a show, but for her 2nd she lost in 20 min into the bad one he was calling about. Dulce 2xw was calling Ch. Cheyenne to compete against her, so we obliged. Cheyenne’s championship and her next 2 were done in a 6 month span. Once again like clockwork Cheyenne decides to come in heat before her Grand Championship, what the hell is up with that?! This time it only took 24 minutes as Dulce does not endure the machine digging into her shoulders causing massive leaks before hitting her sweet spot in the throat. Dulce knew her time was up if she stayed there and decided to make a run for it. On that day Cheyenne just went for a vacation stroll in Mexico City and she brought back her Grand Championship, making it look easy.
When we got back home a few days later Cheyenne was still in heat and we battle crossed her to our Redboy stud T-Lac. We were hooked at the same weight with Cheyenne’s half sister at the big convention in Baja. There were rumors coming from the West Coast that Cheyenne would be killed but they didn’t know we weren’t even taking her. The rumors kept coming so we decided to give them what they wished for, and we gave Cheyenne a shot so she wouldn’t get pregnant. I began to work her and she was already in excellent form and health cruising toward the big convention in Baja where Cheyenne would be #17 out of 20 matches. We’re told we were facing a short order killer in from SIC Kennels down from Ch. Paco. We were happy to have good competition and we knew many people there were anxious to see Gr. Ch. Cheyenne dethroned. The SIC Kennels crew were gentlemen and good sports before and after the show. Animals are released and the rival pushes very hard and fast to the stifles and right away we get a bleeder on our rear, but not even a minute goes by and the leak was plugged due to Cheyenne being in such good shape and STRONG! We control the opponent by the ear, scruff and muzzle at a very intense and fast pace with adrenaline at 100%. Cheyenne would clamp hard on the back of the neck and scruff while Daisy was still trying to go to the backdoor, I saw that the rival already had big contusions on her scruff and she slowed down a little. That’s when Cheyenne got in the shoulder and really touched her. Once she was able to get to the throat Daisy was not the same as she had finally met a rival that could hit as hard as her, straight for your life. Like all her previous matches, Cheyenne lays her down and starts going in circles connected to her throat. “DURO, SHAKE CHEYENNE!!” I could hear the screaming from the huge crowd with everyone hyped up to the max. I call a turn on the other and it is granted. Cheyenne once again slams her down by the throat while the other is now desperate and Cheyenne prepares the house specialty and goes for the belly, “DURO MAMY, DURO!” I tell her. Right away the green fluid shoots out and Daisy starts complaining. I make a handle and take Cheyenne to our corner. Daisy comes out on her scratch and Cheyenne meets her on their side and steam rolls her and this intimidation makes her jump into the 2nd row seats. Cheyenne was making history, many folks knew about her and were now witnessing that Blackrocks Kennel is for real and has quality animals. On that particular night the killer from Cali only lasted 17 min with Cheyenne. The best in show was not even voted on; it was automatic for Gr. Ch. Cheyenne 6xw 1xBIS.

Today she is resting at Blackrocks waiting to be bred to the supernaturally game Nazi 1xw, and enjoy her retirement. Cheyenne has always been a super active gyp, when it’s time for the keep the Tatis blood comes through with great physical specimens that love to work. I would like to thank my team for being consistent and working so hard. My wife, Alejandra who is a fundamental part of my conditioning program by preparing all of the meals during the keeps, without her it would be very difficult. I dedicate this one to my Father and Mother who always supported me. And my brothers and especially my twin daughters who push me to be the best so I can make them proud.