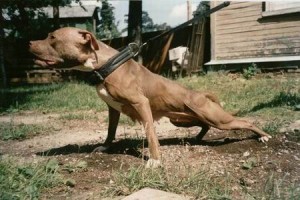 24 August 1997 from matings GR CH RED ALERT ROM c NESSY born litter of 5 puppies, one of whom was my future champion. For us it came at the age of five months. When we first saw Holly, she, as a result of small-scale clashes with odnopometnikami, the eye was destroyed and torn ear, but she felt immediately put us to fight in, and we are happy that then chose her. The first week at the new location, Holly constantly slept. Then it is very surprising, as we have already lived pitbul never sat in one place. In fact, we are simply not imagine that there might be a dog with a balanced psyche. Holly grew friendly and mischievous puppy without showing any special interest in other dogs.

Then came the battle GR CH RED ALERT ROM vs Ivanchenko’s ANDREY III, which I like games Zhigan Lemon vs Quinto and Hammer vs Ronnie, I think one of the best Russian matches, as they showed the dog that we look for in pitbulyah — deep GAME. Being impressed by this game, we decided to try the role of Holly. She was then only a year, but nonetheless, it showed itself, just like an adult dog match. After 5 months, we again put in the role of Holly with her sister, but this movie did not last, and 5 minutes. Exactly two weeks later we let her in again. At this time her opponent is very good geymnaya female – daughter Garner’s FRISCO ROM, in addition, it is heavier than our dogs at 2,5 kg. Holly ruined it for 10 minutes, and we realized how lucky we are stretched ticket.

After that, it was decided to tie it. After reviewing the recording commercials and children’s games Ablizin TIGER (1W for 1 hour and 20 minutes in the U.S.), as well as studied and advised of his pedigree with known pitmenami, we went to Belgorod Dmitry Ablizinu. 7 May 1999, Holly has successfully given birth to her first litter. Some puppies from this mating have showed good results.

7 September 1999, the Holly in the first quarter Rendezvous with a daughter Viera’s CH HARVEYSON (3W / 1L – game) on a nickname ABTS. In the first minutes of rogue caused Holly serious shoulder injury, the back legs, eyes. But in the seventh minute, Holly was able to reverse the course of the fight, and another 6 minutes Best had to withdraw.

The second way Holly was held on 28 November 1999. Opponent was the Black Storm’s JACKA – Daughter Guliakov’s JACK (1W). The match lasted 9 minutes. Holly did not leave Jack chance to win, severely attacking her in the chest. This match has shown the true force of its bite. Then we tie the match with Holly Ablizin TUCSON (1W for 6 minutes) and 17 April 2000 born puppies from these matings.

In the early summer of last year we signed a contract with the well-known in Ukraine champion CHERRY (4W) – daughter of Milic’s Samson (2W, 1L game). The will of the circumstances that you do not want to remember, at the time the match was harder opponentka Holly at 1.1 kg, the weight of Holly did not match her pitvesu. This match took place on 9 September 2000, and was very tense, as Cherry has a very strong, tough and interesting dog. But, nevertheless, Holly was able to prove that it truly can be a champion. The match ended at 52 minutes. Cherry was shot.

In December 2000, we telephoned Dmitry Ablizin and caused Holly to the match with a daughter Ablizin TIGER (1W). Until then, we have the announcement in a magazine that Holly is open for the match in the weight of 17,5 kg of any opponent. Refusal of the proposal Dmitri could not be correctly interpreted, but the main course that is not in my rules to evade the call. Therefore, we immediately agreed. And the day match. From the first minute of Holly storm opponentku and at 4 minutes Dmitri decides to withdraw his dog. If someone thinks that this game was a treaty, you can call me or Dmitry, and not to ask and tattle on the side. Once again, recall that Holly is now open and the weight 17.5 kg. Call us. A pleasure to take your call.

Recently, Holly has litter from her son – Pepsi Team’s BIG BALL (son of Holly from matings with Ablizin TIGER (1xW)).

Here’s the whole story yet and champion Holly. For three years she managed to give birth to three puppies and the litter of four to win the match. We hope that this will not last her knitting and games, and that this story will have a very interesting continuation.

p.s. After the release of this story in the magazine scratch, Holly was placed on 5 match against Champion Kára (DD & WW’s CH KARA) and won this match Holly became Grand Champion.