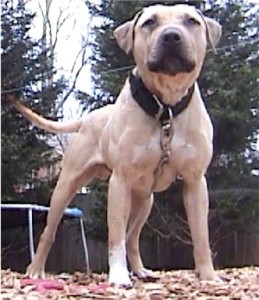 This dog is the product of Barracuda bred back to his daughter Thalia, making a double breed GR CH BARRACUDA and a triple breed GR CH MAYDAY breed dog, Her bottom side is Julieta who is off of Mayday. This makes this dog one of the tightest bred Mayday dogs around, via the great dog Barracuda. O was purchased as a pup from Latin Force Kennels. They said he was wild at 10 weeks. When we got him he was shy acting. So we thought “oh no we got sold a lie” Then we put him in the puppy pen. With out hesitation he went right to work. We knew then we were not sold a lie. As a young dog he was typical pup with our family but as he was wild when he saw the object of his attention. In his schooling he was way too much for everything. So at very young age we took him out. We did not want our kennel to get anymore of him and none of our friends wanted anymore of him. He was just too much for everything. Where ever he bit he shut his mouth fully. He would scream the whole time One guy said that was a curr sign while I thought it was he was just so mad.

*.-SHOW#1.- This was local show. We did not know really what to expect so we decided to go local and cheap. Guys had a big Mims dog that was first time out also. O went right to work. At 12 min they gave up. Where ever he bite he shut his mouth. Then when we went to break he got pissed and hit me. He broke my arm clean. All with his flea biters. The whites of his eyes turned red. He was so mad. He did his scream thing so we got to find out it was no curr sign.

*.-SHOW#2.- We decided to give him a rest and see if he grew out of this of hitting us if we tried to break him. He didn’t. So we opened him up under condition that he was to be brought in an air kennel. We would weigh him in the kennel then weigh the kennel after he was released. It was hard to find some who would take that deal so we had to travel south. We found South-side Boys. They had big dogs and O is a big one. So it was set. They had a 2x off of Tant blood on top and Mims on the bottom. We got laughed as some when we brought him in the kennel. But it was a skeptical laugh. He was going crazy. He shot out like a rocket. The Tant dog did its best but O is so quick and strong that he overwhelmed him. At 28 min they picked up a very game one. To break him off you put a collar on him and tie him off with two leashes. Then break him. And GET OUT. Let him calm down for about 30 min and then pick him up and put him in an airl kennel. Only way. No one laughed when we did this. A few of the people present had seen Fatty vs Cuda. They said O was Cuda with more speed and power. Cuda was always a very methodical dog. O is fast and furious. The people at the show said they want dogs off of Cuda now. So this was good for Southern Kennels. For those dog men to see a dog of this caliber off of their newest stud.

A couple of funny things happened on the way to the show. I told the guys when walking him out not to do it near anything. They did not listen and had to leave him tied to a tree when he saw somtihing he wanted. I had go down and get him. The other is their is no washing. We made the mistake in his schooling of washing him before hand. Now every time he gets a bath he thinks it is time to go. The guys who took him down also tried to bath him at the hotel while I went to dinner. They were in the bathroom when I got back to the room and he was running around the room free. Next time they all will listen.

O is true freak. He is so fast and powerful yet he moves like a 35 pounder. He has the huge Cuda teeth and big giant head. Clearly one of the finest dogs we have seen in a long time. He is also huge for his weight. Going 56 or 57 he looks like a 65 lb er. To condition him you just put a male near by. He runs and jumps all day. His area is run down by about 8 inches. Each weekend we fill in more and he runs it down. As a puppy he was our house dog. He is house broke and has great manners. Just wild when show time. I have never seen a dog this intense.

*.-SHOW#3.-After O’s last win the fellows we went into said they had just the dog to beat O. He was a Hank bred dog called Willie. He was a 2x winner that was reputed to be the best head dog in the tri-states area. They felt this would be just the dog to frustrate O and keep him out. We went at 57 which it turned out to be too heavy for O. He came in at 55 and could have gone at 54. Still he looked like the bigger dog. I think the warm weather allowed him to come in lighter. Willie was a tall racy looking dog, that was much taller then O but no where near as strong looking. We thought this would be an easy one when we say him. But in reality it was our hardest. This Willie was slick. He was totally content to ride the ear and stay out of trouble. That was his game plan. He would make moves that I have not seen a dog do in the almost 30 years I have owned them. His wind was superb and he was very composed. It was so hot in there as the temp was almost 100 degrees. The fans were blowing but still it was way too hot O kept pushing and driving trying to figure this Willie dog out. Every move that O made this Willie had a move to stay out of trouble. We did not want to get into a scratching contest. Not that we didn’t think O would scratch but the handling of him is so difficult that we didn’t want to even try. They called a turn on their own dog but we were not the fastest of handlers so it was hard to get one. At the 43 min mark we got a handle. Willie to go. On the release I let O go and he met Willie 3/4ths of the way over. Still Willie got the ear. He kept out of trouble. Finally O did his slickest move I had seen. He pushed Willie hard to the side of the pit, then dove for the back end by just powering out fo the ear hold. He got in. This was his first good one and came at 45 min. Once in he didn’t come out. Willie protested as O was really doing damage. Then he came out and went to the shoulder. At the 50 min mark he switch to the throat and that was a rap. At 53 it was over. O in this one had to show intelligence, and some gameness to overcome the heat and the frustration of the style of the Willie dog. While I don’t like dogs the style of Willie I have to say that he impressed me. No question he would have beaten many a dog with that style. But in the end the power and mouth of O won out. He got smarter as it went on. His other shows he just bulldozed over them but in this one he showed other skills that we were glad to see. O has recovered quickly from this. We are going to give him some well deserved time off and avoid the heat. To date we have called out some of the top dogs in his weight. No takers yet. OTW this fall.

My congratulations once again to V for the line he has created. His acquisition of Barracuda is one that will allow the Mayday line to continue for years to come. O also accomplished something for this line. He has proven that a pure Mayday dog can be a great athlete Many people think that when you breed tight you lose athletic ability and thus avoid dogs that are tight like him. O is triple bred Mayday and inbred Barracuda. An interesting side note on him He traveled much better this time. He even played in the hotel room with the pups we picked up. The people who had seen him last time could not believe it. He acted like a pup the whole time. It is just his serious side that has made his reputation.