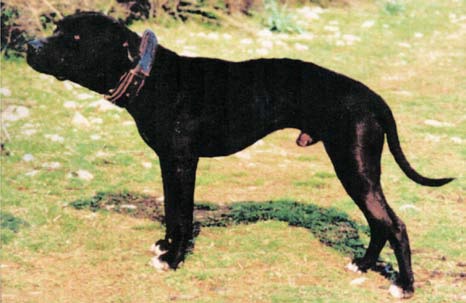 I was going through a box of “dog stuff” and I came across some photos and pedigree of a dog called AGGRO, the dog featured on the present cover of the SDJ. After I took a thoughtful look at his pedigree, besides bringing back memories, I noticed that he was bred down from a combination of some of the top bloodlines of the Balkan area, tried and true dogs. So, I decided that it would be a good idea to take a closer look at the subject and write a few words about his ancestry. I’ve always been interested in these kind of analyses, hopefully, some of you will find it interesting and learn from it as well.

AGGRO, this solid built bulldog with a head like a bucked, was born in 2007 on the yard of my good friend T.A., out of Zinetti’s DUKSON bred to a game little bitch called MISS JUMBO JR., a dog which I happened to own at one time, but let’s slow down a bit and start with his top side. Zinetti’s DUKSON was out of Zinetti’s GOLEM and Zinetti’s PARMA. DUKSON’s sire, GOLEM, a solid 50 lbs dog out of Davor’s DUK and Zinetti’s ANNIE 4 GUNS, ended up losing his only match game at the early age of 19 months old against Trbi & Peglica’s CH Rambo. He was retired after the show but produced a pretty good percentage of game dogs. 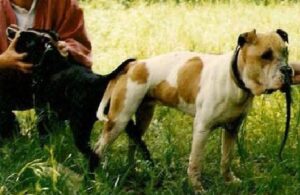 Davor’s DUK was part of a litter sired by Davor’s VILI and out of his own dam, Davor’s RIA, that also included Zinetti’s CH YUMA and San Antonio’s LEN. DUK was never matched but tested thoroughly and rolled a few times. He lived most of his life on the yard of his breeder where he was bred only two times, then was sold to OK Korall in Italy but since he didn’t really had anything to breed to, old DUK stayed at Zinetti’s yard for most of the time where he produced five litters that included SUD’s CH CHINESE, BS Kennels’ CH MY DILDO, Zinetti & Cuper’s RIOS, MACHO, GOLEM, KATANA etc. to make a long story short, DUK turned out to be a great producer of game dogs. He died at the yard of Tatanka Kennels at 13 years. YUMA, was a brutal 39 lbs bitch that won three in short order for Zinetti before a 2:00 draw in Italy, going uphill against Di Gregorio’s BLACK VELVET. YUMA never produced any pups, unfortunately she was sterile. LEN’s only match was into Zezevica Kennels’ GR CH Piah where, after loosing half of his head, LEN was finally picked up game at 1:12 and voted Gamest in Show.

Davor’s RIA was bred by Ljubomir Obradovic out off of Ljubomir’s THOR and Ljubomir’s CINDY. She was heavy inbred bred on the deadgame Country Boys’ VENTJE dog. RIA was never matched or rolled because she was crippled due to heavy inbreeding. She was more like Davor’s house pet but also his main brood bitch at that time. GOLEM’s dam, ANNIE 4 GUNS was out of Davor’s VILI and Zinetti’s CH AZRA ROM. She was a thoroughly tested bulldog that never made a bad move, armed with a hell of a mouth. One of the best producing daughter of CH AZRA ROM without a doubt. I don’t think I could write anything new about Davor’s VILI or Zinetti’s CH AZRA ROM, they’re in the history books already, anyway, just a few words about VILI and we will come back on AZRA later in this article.

VILI was a two time winner in short order and, most of all, a great producer. The VILI bloodline was established by Mr.Davor in Croatia and it was based on Davor’s RIA and Ganja’s BLACK MAGIC. These so called VILI dogs are basically bred down from an ELI/SNOOTY bloodline and they’re known to be some real solid built destroyers with an unbelievable amount of strength coupled with gameness. The complete package I guess… Let’s continue with Zinetti’s PARMA, the dam of DUKSON. In 2001, Zinetti & Cuper’s RIOS was bred to the 10 years old Zinetti’s CH AZRA ROM. Sadly, this was AZRA’s last litter and the breeding had resulted in only one pup, a black female which was named PARMA. Later on she became the main brood bitch on Zinetti’s yard.

PARMA’s sire, Zinetti & Cuper’s RIOS was born in 1998 on the yard of GB Kennels out of Davor’s DUK (discussed earlier in this article) and GB Kennels’ CHIQUITA, a double grand daughter of FRISCO ROM. This litter also included CH CHINESE, a red three time winner, MACHO, who won in 2:16 against a dog 3,5 lbs heavier bought from Garner and V.Romeo and of course GB Kennels’ CHELSEA, a killing machine. RIOS won two before losing deadgame in 1:30.

OK, we’re back to AZRA again. I think it’s enough to say that AZRA was a four time winner and one of the best producing bitches in the Balkan area. Still one of the leading R.O.M. females. 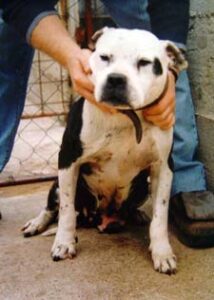 OK, now let’s look at the bottom side of AGGRO’s pedigree. AGGRO’s dam was a bitch called MISS JUMBO JR. out of Jeerera’s MISS JUMBO and Jeerera’s BLACK BANDIT, a brother to sister breeding done by O.Cs, a friend of mine. MISS JUMBO JR. was bred down from a classic combination consisting of some real old school blood… Radonjic’s JUMBO ROM, Auclair’s CH TOM and Krkeljic’s CH TOM. She was never matched but rolled many times, perhaps too many times, and showed to be a real game one. By the way, she was the shyest dog I ever owned.

MISS JUMBO and his brother BLACK BANDIT were part of a litter by Radonjic’s JUMBO ROM and Krkeljic’s TRINITA, a game tested bitch sired by Auclair’s CH TOM and out of Nikic’s TAJGA, a tested bitch herself. TAJGA was sired by Krkeljic’s CH TOM and out of Zlatkovic’s SARA, a bitch out of the classic Ljubomir’s THOR to Ljubomir’s SPANKY breeding. MISS JUMBO was a game little 35 lbs bitch with typical JUMBO characteristics. She was tested hard and rolled frequently against much bigger dogs never showing a bad move owned. BLACK BANDIT was tested thoroughly as well and won his only match against a two time winner in 1:05.

Relax, I’m not going to babble too much about Radonjic’s JUMBO ROM, Auclair’s CH TOM and Krkeljic’s CH TOM, because it’s already ancient history, all you have to know is that Radonjic’s JUMBO ROM, along with two of his littermates, GIPSY and RAMBO were out of T.J.’s BOSCO and SHEBA and they were sent as a gift to Dragan Radonjic by his good friend, Bato Kadovic, who lived in the New York area at that time. RAMBO was stolen. GIPSY won two before losing DEADGAME against Scepovic’s TOM JR and JUMBO lost one game against Garlaunis’ RAMBO (Cune’s IRON KID) in 50. I won’t even go into listing all the greats these dogs produced, as it would take up pages and pages of space. They have made the most significant contribution and impact on the breed in the Balkan area. 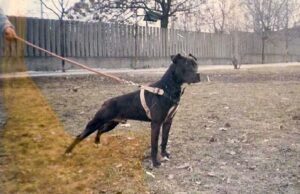 Krkeljic’s (Andy Bad Company’s) CH TOM was out of Brousseau’s CH BUSTER and Snakeman’s HURRICANE and was imported to the Balkans by Mladen Krkeljic as a two time winner who lost one against Captain America’s CH GUNNER. Later on, he won over Ljubomir’s THOR in 33 and became the first official Champion in the former Yugoslavia. Auclair’s CH TOM, out of an unplanned breeding by Jean Louis Bosse’s PISTON and PEPSI was also imported by Krkeljic. At that time this big black bulldog was a 3xW and 1xL against Bosse’s PISTON, his own sire but won two more for Krkeljic. One over Heffner’s RED RINGO FOX in 33 and another against the super game Krkeljic’s CH TOM in 1:52, owned at the time by Scepovic. Of course, this story isn’t complete, or intended to be. I’m also sure I’ve made a few mistakes, so please feel free to correct me. So what is the moral of this article? Don’t worry about titles just cull hard and breed
the best to best. Of course every great dog will produce some that are not super stars but you’ll have to give them ALL a chance…it is after all up to us humans to raise them to be the dogs we want them to be. Not much more to say. Oooooh, what about AGGRO? He was a good one as well…