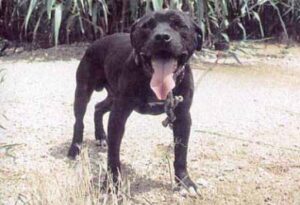 I was not the owner or breeder of VILI and maybe I’m not “the right” person to write a story about this great animal. But since his breeder Davor never wrote anything about him, and besides Davor himself, very few dogmen know as much about VILI blood as I do. This is why I think my view on that dog will be just as good! I had the privilege to pet this animal with my own hands! I saw him in his 2nd match with my own eyes, I was bred my best producing bitch to him back in 1997.

But, to start from the beginning. It was somewhere in the mid 80s when Davor from Croatia purchased a double breed daughter of Ljubomir’s THOR (aka CHICO), directly from Ljubomir Obradovic in Belgrade, Serbia. She was heavily, and I mean “heavily” inbred on Country Boys VENTJE. VENTJE was a well known dog in Holland, he won 2 in short order and lost 2, showing to be a deadgame specimen (R.I.P.). He lost his last vs Mr.Nobody’s CH ROCKY. This little inbred pup got by Davor was named RIA. She was crippled due to heavy inbreeding, her knees on her back legs dislocated every time she made a fast move. Because of that she was never rolled. Davor kept her in his house like a house pet. She was his main producing bitch, he always believed in her, because of the way she was bred. At that time there weren’t many pit bulls in this area. The chances of finding a worthy stud dog for her, weren’t very good. After studying the pedigree of Ganja’s BLACK MAGIC (aka MAD MAX), Davor chose him to be bred to his RIA, to outcross her. He traveled to meet the owner of MAD MAX who was Sine Leskovar in Ljubljana, Slovenia. This is where the breeding was done. 2 months later RIA whelped a litter of 7 pups, all females. But Davor wanted males too! So sometime later he repeated that breeding.

That time he gets what he wanted, a few males and females. The second litter I believe was born somewhere in 1989. Besides VILI himself, in that 2nd litter also were born his brothers T&B 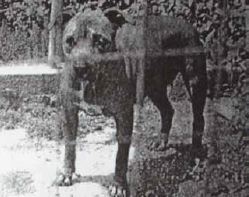 Kennels CH. BRICK and Biser’s BULDO 1W. I saw both dogs with my own eyes in the box, both were very good. BULLDOG was one of the biggest, hardest mouthed dogs I have ever seen. He won his contracted match in only 9 min with one single hold under his opponents left shoulder, there was blood all over the arena. His opponent was a son of WHAM ROM and he didn’t have any chance. His owners picked him up, wisely. That match was at catchweight, BULDO was 31-32 kg (68-70.51bs) of raw power. He was a black dog with white feet, bulldog type build with an abnormally big head and extremely hard mouth. His owner went to a war that started here in our country and BULDO went with him to the front lines. His career as a match dog ended there.

CH. BRICK on the other hand, was a brown dog, with a different style, he was smart, he could fight the defensive and offensive way when he needed to. He was matched 3 kg (61bs) over his true pit weight, he was fat. He was owned by Brothers Kennel from my town. He won 1, then lost to Ljubisa’s CH. KING. I saw that match. BRICK kicked KING’S ass for about a half hour. Then, being fat and in poor condition, he went down, overheated. KING was a true finisher, he pulls ahead and BRICK was picked up at 45 min. He scratched back very game on 3 wheels. His owners were disappointed when they got an offer from T&B Kennels to buy BRICK from them, off course Brothers agreed to sell him. T&B purchased BRICK and young SVRCO (VILI x BONNIE). They matched BRICK 2 more times at his proper weight 24.5 kg (541bs). I saw his last match for Championship in Sinj. BRICK went into Barac’s PINKY who was a 2X winner at that time and IX loser. They both were 2x winners, and they both lost lx against the same dog, Ljubisa’s CH. KING. 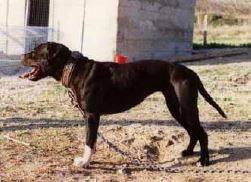 BRICK won Championship over PINKY fair and square in lhr 45min, both scratched game at the end. Before to go back to VILI, I just want to mention few more females which were from those 2 breedings of BLACK MAGIC x RIA. One red female was sold to Silvio from Zadar. He named her IRA and after her schooling was over, he decided to keep her as his main brood bitch. His main stud dog was WHAM a 2W at the time and Silvio bred them. He got several litters out of WHAM and IRA. Most known dogs from these are Ljubisa’s CH. KING (the dog who beat CH. BRICK), Galesich’s CH. MEGY 3W, Galesich’s RAY 2W 1L and Kuba’s CHARLIE 1W 1L. Two females from BLACK MAGIC x RIA litter went to Serbia. One black bitch named MEGY won 1 in short order then lost game to Bijeljina Boys CH. BELA in lhr 25min. Mr. Radonjic and many other old timers say that match was one of the greatest matches ever. I saw that match on videotape. MEGY was double smaller than CH. BELA, in any case BELA was too smart to lose that match, MEGY scratched back game. Another female which was exported to Serbia was named MEXY. All I know about her is that she produced one good dog. Djindja’s GR. CH. JEEP 6W, who lost his 7th vs Montenegro’s CH. JOCKER. I know of 2 more sisters to VILI, one is Davor’s KORA. I saw her match when she lost against David’s CH. ORCA. Funny match, ORCA was in great shape, ideal pit weight at 23 kg (50.51bs). Big females, but KORA was fat at that weight. She looked as was full of puppies! I guess her true weight was 421bs. KORA was picked up at 45 min and she scratched back. Last sister of VILI I know about is GINA. She is known because she produced Ljuzda Kennels CH.

PATAK 3W 1L ( 2 .05), when was breed to VILI. Now let’s go back to VILI, to understand the true point of the VILI story, I wanted you to know a little bit more about his littermates and bloodline who runs behind him. I believe Davor started schooling VILI when he was only 15 months old. He liked him from the start more than his other littermates, he saw that VILI is the “special” dog. VILI was a beautiful animal, tall, heavy boned, perfect back, shining black color, white feet and meaningfull red eyes. I don’t know much about his schooling days, but my friend Edo from GB Kennels, who is a close friend to Davor told me that VILI was rolled once into his brother CH. BRICK for 30 min. BRICK was game and bigger, but couldn’t keep VILI off. Davor sold BRICK after, but he kept VILI in his yard. It have been said that BRICK, being bigger, dominated for 20min. After that VILI kicked his ass and Davor stopped the roll there to save BRICK because VILI wanted to kill him. VILI was roled few times but I don’t know much about that, only that he was Davor’s favourite. Anyway, VILI won his first contracted fight at 22.5 kg (49.51bs). He won in a half hour over T&B Kennels ART. I didn’t saw that match, but I heard VILI totally outclassed ART. I saw the 2nd match of VILI. Well, truly there was a disaster around that match.
The match was supposed to be in Pag, a beautiful island where Davor and his VILI lived. Lots of dogmens arrived to see that match. VILI was set to go into Wermacht Kennels’ SATAN there on that little Island. 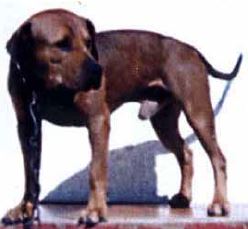 But unfortunately there was so many of us arrived in cars on an island as small as Pag is, more than 200 people had arrived in a village with 10 houses! Hahaha, we were so suspicious to everybody and of course the Special Police Forces arrived and arrested us all before the match even started. They didn’t know what was going on and after a few hours in the Police Station they let us and dogs go. Most of the dogmen were tired and headed back home, a few of us were wondering if the match was still going to happen or not? The owners of the dogs talked it over. Many things were against SATAN that night, he was tired and lighter because of all the troubles, but his owner Buda decided to let him go anyway. We sat in 4 or 5 cars with the 2 opponents and headed to Zadar in Silvio’s yard to face those dogs. When we arrived it was 2 in the morning. The dogs were weighed and SATAN was 2.5 kg (5.51bs) lighter than VILI. It was not fair to go, but Buda decided to try anyway. Of course, it was an easy one for VILI. He won without any problems in 13 mins, SATAN was picked up to be saved.

What did I think about VILI when I saw him go then? Many people think he was just a one way destroyer because his matches were short. This is not true or right. The truth is that many of his offspring are strictly offensive, hard driving dogs, but VILI wasn’t so! He was a complete bulldog, he would go for the head at the start to learn what his opponent was go-ing to do, he was this smart of a dog. When he saw that his opponent was too weak for him, he started with a great finish. He had a hard mouth and was a very talented and fast fighter. Well, I would say one of the best I’d ever seen and I’ve seen plenty, you can believe that! VILI had great air, he was easy to condition. Above all, he was “super powered”, an extremely naturally strong dog! And that characteristic is still today a main trademark of the VILI bloodline -The Super Power! VILI bred dogs usually come in black, with white chest and paws, or they come in red with white chest and paws. All are heavy boned, with big heads and a very heavy muscle structure. They all have a very rough temper, they are never shy with humans, it’s more often they act the other way. There were rumors back then that a match of the year was to be held – Ljubisa’s CH. KING vs VILI 2W. That rumor was somewhere in 93’, but the match didn’t happen. Davor never matched any dog after that. He decided to be a breeder only and had very good success with VILI as a stud dog. I think Davor should try to get VILI at least a Championship title because he was a great match dog in my eyes. But Davor decided to use him only as his main stud dog, not to risk him. At time when VILI was 7 or 8 yrs old, a man from Italy arrived in Davor’s yard. His name was Di Gregorio and he bought VILI and his sister KORA from Davor for an extremely large amount of money and took them both to South Italy.