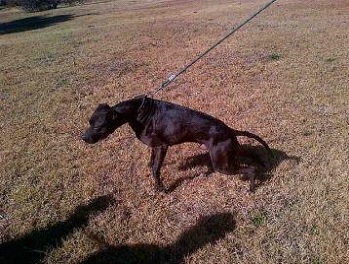 I started out in this sport in the early year of January 2008.As I had no dogs of my own I had inquired on some dogs but could not get hold of any. I met up with guys who were in the sport and I liked what I saw. Good hogs showing real good. But still had not found what I was looking for. In 2009 I met with more guys showed more interest and who had few dogs to show me around. I got my first real pit dog who was bolio x yellow combo gyp. But still that was not enough for me after I have been very impressed with the dog I got from my new friend in the sport. He had a male that was called AK. AK was dog bred from the Diablo dogs that were bred of imp Riddick aka Bumby Johnson. AK was also bred from good dogs a bolio x yellow combo as well. He was a very shy dog tall on his legs very puppy like. It was on a Saturday afternoon that he called me and said he is going to have a look at the dog and if I would like see him go.

I drove to his house picked them up and drove of to the square. Face dogs and the little shy boy would not move dog met him in corner the very first moment the dog laid a tooth on him was at that very same moment he dove into that huge dogs throat and drove deeper into the throat at just 2min they said no this little shy dog called AK was just to much for their dog. Another guy brought another dog and it was on again but I was impressed by this shy dogs speed power stamina killer instinct. We drove home sorted him out I asked my friend if I could have this dog. He said this one ain’t going anywhere. After few weeks of persistence he finally said I could buy the dog. I jumped to it and paid him 800. 00 for the dog. I was happy with my new purchase of a dog. After few months after schooling him out I knew nothing of the big game the conditioning that goes with it etc. friend of mine who had just returned from up country met with the guy known as AK 47 kennels. Lol what a name for a kennel to go with a dog named AK and for sure he was one hell of GUN to have between you legs. Long story short we spoke over the phone and after long discussions I finally sent the dog his way to campaign for me. In 2011 July time has come when i see my dog for the first time after months.. He looked super strong and well worked the shy little Gun..

AK vs Bo
Males
Weights 22kg
Bo 21.7
AK 22.2
AK over by 200grams ST asks for some of the forfeit and we go Release and AK storms out of corner meeting Bo in the center and it’s on goes tit for tat for the first 15min with the pit side chattering who is the beautiful black dog Mr 47 the handler is asked and Mr 47 just laughs and says that’s a good boy AK. At 25min Bo tries sitting on the ear but AK says no to this and thrushes him into mid air by the throat and body slams him down at 32min a turn is called on Bo. No does not like what AK is giving him as AK is in full control will shoulder head throat holds. 40min 47 gets a handle on AK and brings him to the corner. AK can’t be held in his corner going crazy. Bo to scratch and he comes out AK meeting him in the center with AK going all out wanting to put Bo out of his misery at 44min the ball is in ST court as AK his dishing it out as Bo starts protesting as AK is closing his throat at 50min ST throws in the towel and concedes making a AK a well deserved 1xw. Well done son u made everyone asking around about you Sunday I left for my home town leaving AK in up country what a weekend I have got myself an official winner. Thank you for the hard work Mr 47 Months pass by and I get a call CB we got called up SB is ready and wants a shot. We contract it and it’s one

AK VS SKOLLIE
MALES
WEIGHT 22KG
SKOLLIE 22KG
AK 21.5
this time around AK looking in the best shape ever but as a puppy against a giant like skollie hahaha ha with SUNNYBOY saying Mr 47 are going 3hrs tonight Release and it’s on AK coming out blistering hard onto skollies ear and he starts dancing but without any effort skollie takes him out being the giant he was. At 10min this show isn’t slowing down at all as these 2 dogs are not wanting to give away anything from each other AK tries slamming skollie down but skollie is to big and a good wrestler himself. At 22min skollie goes ahead of AK but still a-bit tough to see which way this show will go as the little 47 is not backing off from this one at all and skollie and his handler a-bit startled by the display of AK not slowing down at all. With skollie on top and not liking the little AK pushing him around he looks around and the crowd is starting to ask questions as his in total control of AK but uncomfortable with AK making up to his size in speed. at 28min with not a lot of damage but just skollies brute force man handling the little AK I wait on AK 47 trying to get his attention to let him come to my corner to tell him that I Wana pick up my boy. At 32min I get him to the corner and I ask him to concede as I would safe my boy and fight another day. At 32min skollie is a well deserved 1xw with AK 32min 1xw 1xgl Its a Sunday again and I’m off to my home town again And I leave my boy behind again With months passing by I make the decision to bring my boy home. Transport is arranged and AK is loaded for transportation. Few days later my boy is finally home in good shape healthy and well looked after. Thank you 47 kennels for taking care of my boy. Few months go by and I get a call from the Scots he has a champion wow what an opportunity to do my boy into a champion

1xW 1xGL AK vs the Scottman ch Kuzco
Weight 22kgs
Males
AK 22.3
Ch kuzzco 22.2
and the scottman gives me 300grams traveling allowance as for this one me myself and young money had to travel 1000km with two of our hogs First time traveling went well we arrived 1 dag before show day and the drive was exciting adventurous and full of fun as we had our own fun with a lot happening on the road hahaaha.. Its show time I get into the box with AK he lays eyes on the champ. It’s release dogs and both dogs come out hard and true AK meeting the ch in the corner hard driving him back into his corner it’s a speed show the first 10min with the ch showing some pit smart experience and AK says hold on iv got some tricks up my sleeves aswell and he bounces around the box like he owns it. At 25min a turn is called on ch kuzzco with AK showing to pull ahead now giving pressure and defending everything the ch tries to throw at him at 35min a handle is made I get AK run to the corner cooling him down abit as he started running hot abit. It’s time to go at it again with the break seeming to give AK a new edge. Ch kuzzco coming out of his corner like  true ch but AK meets him dead centre straight at the throat drives him in the air and slams the ch to canvas. Wow crowd is in for a good one as everyone is excited now. At 47 I get a handle with AK to scratch I turn to face AK I hear ch kuzzco moaning as he looks at AK I’m thinking this is still going to be a long night. AK blasts out of the corner only to find out when AK took him on his throat again its because AK man handled him that hard he felt the force going through his body as each Contact with AK was to hard for him. With AK in full control he now works on the down worked ch and my corner is going crazy send him CB send him. I’m pushing AK to finish and his in the throat working on the ch who later starts protesting as AK goes into his throat deeper. At 55min the scottman Concedes and picks up the ch. Making AK a well deserved 2xW 1xGL and making ch Kuzzco 3xW 2xGL

Thank you for the sportsmanship the Scottman and crew. After the hunt we get home sort out my boy with something to eat and a good night’s rest The Sunday afternoon after a hard weekend in JHB with me and young money winning one and loosing too its time to head home