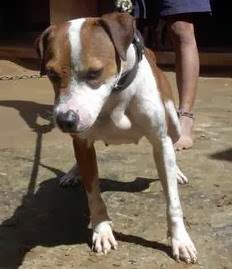 December 2004 would always remain a landmark in Philippine pit bull history as it was perhaps the first (and hopefully not the last) time when the two major gaming clubs went head to head and pitted the best of their best at that time. I have no intimate knowledge as to how this historic event called Bakbakan 2004 came to be, nor was I one of the fortunate to have one of my dogs on the night’s fight card, but I was there to witness first hand why the soon to be legends like GR CH DGK’s TIMOY was well worthy to be remembered.

Honestly, I attended primarily to watch the litter-mate of my dog, who had just lost on the same month, go against one of much touted offspring of CH. ARCE’s WHISKEY ROM. So on the morning of the said event, I was dozing drunk in the pool of a nearby residence that once belonged to a fellow dogman (who is now no longer in the game) with some of his group mates. Since not much among their number felt like drinking before the fight, I consumed a whole bottle of brandy by myself plus a few beers and went staggering to the venue that afternoon with one of the breeders I tip my hat to. En route, we saw, met and hobnobbed with our brothers in the sport- though I was half-drunk to remember most of them. But I remember clear as day who I saw and nodded hello to when I was hobbling back to our camp after taking a looky-loo at DSK’sANDY 1xW, who was slated to go against MTK’s BRUNO 2xW. Noel EBK sat on a mat, clad in his classic “Let’s Rock” t-shirt and his matching bonnet. Dangling from his lips was a cigarette and wrapped in his arms was a well-toned, red and white bitch who stared seemingly without a care at the festivities before them. “Tina” I mumbled to myself.

TINA was out of HTK’s foundation stud GATOR 2xW and HTK’s NOBANE, daughter of Samia’s BICK RUDE and HTK’s SCUDSENORITA bitch TISAY. TINA had first gained notoriety when she went against Southernmen’s VIVIAN and made short work of her. TINA was eventually to become the Philippines’ first grand champion. Yet at that time, who ever saw her fight would never doubt she was destined to make history, especially in the capable hands of one of the greatest dogmen to ever spring out of this hell hole we call a country.

I was never really friends with “The Man”. However, I had met him years before on YGK’s camp when TABAS went against STD’s CATHY 1xw. This was when he and YGK (who was sort of my mentor when I began in the game) were still chums and the crap that went flying around the now defunct REJOBOTO message boards was still in the nearby future. It was EBK’s aftercare know-how that saved TABAS that day after a hard fought match that lasted almost two hours where neither TABAS nor CATHY was willing to give up an inch. After that, we only said hellos whenever we came across each other during PDC conventions then held quarterly.
That day was no different. I gave him a nod and said “Sir” and he nodded back “Musta.” I saw him next after that when I found myself seated near the pit, sandwiched between Serge, owner of soon to be CH. ELVIS, and an old man we affectionately addressed as “Dad”. TINA was going up against an Arce-bred carver dog called LUCY. There had been much pre-fight talk on the boards (and only God knows where else), but on that night, on the very instant the dogs were released from their corner, there seemed to fall a prevalent hush… before the night again erupted into cheers and taunts.

At first I gave the match little regard, as in between the brandy and the extra bottles of beer I had bummed from friends around me, I was busy praying to the pit bull saints Earl Tudor and Don Mayfield to bless my dog’s litter-mate as she was to fight last that night. Then from where I sat, I heard a crisp crunch and a whimper. I looked up and saw TINA with LUCY’s front end between her steel-like teeth. LUCY was in trouble. Her handler was busy cheering her on, trying to urge the bitch to hang on. EBK stood and circled around the pit almost wordlessly, cigarette in hand and looking cool as a cucumber while TINA shook the life out of LUCY.
It was then I remembered some of what had been said in the GP message boards: “TINA, sinusundo ka na ni LUCYfer” . I scanned the faces of the crowd and tried to imagine which of those bozos said that and what must he be thinking now. Cyber dogmen is always something we could always live without.

TINA continued to methodically demolish LUCY a little past the half hour mark. From where I was sitting, it looked as if TINA barely had a mark on her. Looking back, how I wish I stayed a little sober so that I may pay attention to details years after as I’m writing this now while I try to brush aside the cobwebs of time. What I DO remember was the faraway look on LUCY’s eyes when she refused to scratch back and continue the fight, while TINA waited in her corner seething with silent rage. And man, how I remember thinking how I wished someday I’d have me a dog who fought like the devil.