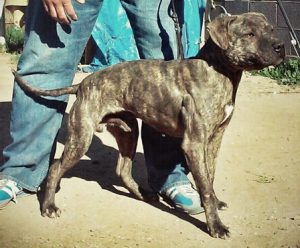 About three years ago, I was selected to be part of a committee to pick the Best Dog and Gamest Dog in a show in a foreign country where the sport was not illegal. I didn’t know that I was in for one of the best conventions I’ve ever seen , with outstanding participants . The very first match involved a very classy brindle male. He was so smart and had such a classy style in beating a pretty good opponent that I was sure that would be our consensus Best in Show right there!

I was later to learn that his opponent was a two-time winner, but Rocco made it look easy. In fact, he had handled him with such style that he hardly had a mark on him after a match that came within two minutes
of the hour mark. However, the second match was one of the best I’ve ever seen. It involved a very talented red dog against a black opponent that seemed to be outclassed. The red was phenomenally strong, and he was a favorite in the betting among the crowd that obviously had seen him before. At one point, he stood his black opponent up and drove him right out of the pit. I’d never seen that happen before. But the black was no slouch, even if he was behind all of the way. Little by little, he evened things out a little and then suddenly he got past the red’s defense and into his stifle. In doing that, he demonstrated that he had punishing ability, too, as he immediately did enough damage to the stifle that it puffed up like a balloon. In a show of good sportsmanship, the owner immediately gave up the match. The red then made a very game scratch.

In spite of several very good matches to come, the black was voted Best in Show, and the red got Gamest in Show. I didn’t forget about the classy brindle dog, though. In fact, he was still my Best in Show pick, but I got outvoted by my fellow judges. As it turned out, the brindle went on to quite a career. In a very short time, he was matched and won again. All of his opponents were really good dogs, as every single match took place at an international convention, where many people traveled from faraway countries with a dog in which they obviously had confidence. In short order he had won three more matches. However, in the fourth one, his opponent was of sufficient quality that Rocco couldn’t make it look as easy as before, as the match went over two hours against a very quality opponent. If there had ever been any doubt about Rocco’s deep gameness, it would have been erased in this match.

To be clear, I only saw the first match, so I am relying on reliable people for the details of the bouts. In my opinion, Rocco’s owner took him out again too soon after that grueling two-hour match, as Rocco didn’t have the 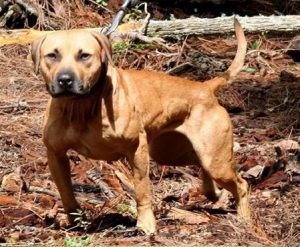 same ease in handling his opponent. At least, he didn’t after the first twenty minutes. He started going down, so his owner picked him up in 35 minutes. We have to admit to the possibility that he was simply up against a better dog. This was another international convention, and the other dog had traveled substantial distance, so his owner obviously had reason to have confidence in him. And he did become a champion in his match against Rocco. Still, it may have been a different story if Rocco’s owner had rested him a little after his previous marathon match. When you have an outstanding dog, it is easy to get to thinking that they are able to overcome all obstacles. Even so, he was one of the best I have ever seen, just judging from the first match, the only one I saw in person His owner thought that there was something wrong with him, as he was his usual self until he began weakening at the twenty-minute mark. That had never happened before. Still, he is a good enough dog that I always ask the owner about the status of “our dog.” It’s my little joke when someone has an outstanding dog.

One reason I like the dog so much is that he is a smart dog with the usual Bulldog personality and attitude. He was rambunctious as a pup, but he has matured into an ideal pet, as he is an old soul type of dog with perfect manners. He won’t lift his leg in inappropriate places, and he became a gentleman dog—a pit artist with manners! In my opinion they should all be that way, but it’s not always the case. I’m particularly fond of the dog’s looks, as he could easily be a show champion. That doesn’t always mean a pretty dog, but it does involve grace of movement. I even like his color. The time was when a much larger percentage of Bulldogs were brindle, but things have changed. In any case, I’ll remind the reader that technically brindle is not really a color but a pattern, but everyone uses the term as though it were a color. I like his brindle pattern and the shade of color that he sports, too. Truthfully, the brindle pattern doesn’t look too good to the general public, I suspect, but I’ve always liked it because it was such  a Bulldog trait back in the old days.

Unlike many dog men, I take great pleasure in a good dog—regardless of the color or owner—but in this case, I like the owner, too. Anyway, the dog has excellent breeding behind him. A son of Stringbean, a good one-time winner that has sired a lot of good dogs, I suspect he will be prized in future pedigrees. He’s not just a good dog himself, but he comes down from a whole lot of good ones, from Champion Butterbean (Stringbean’ssire) to a nine-time winner, Champion Barracuda (a son of the great Mayday), on his mother’s side. Some might call him scatter-bred, but that doesn’t matter if his ancestry consists of all good dogs. He is a good enough dog that I wish that I had had my picture taken with him, as I have with a whole lot of other good dogs. Maybe I’ll still get the chance, as he has been retired to stud, having nothing left to prove.