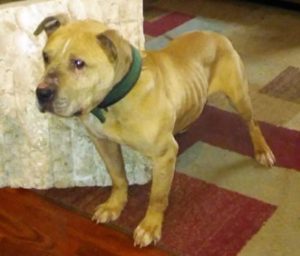 Lil Toney’s GrandChampion Blade Icewood was bred by Lil Toney from a breeding between Scooter’s two time winner Buc a dog bred down from an old school Eli / GR CH Virgil R.O.M. / GR CH Buck R.O.M. cross
and Lil Toney’s Vana – double bred on West penn Kennels ‘ Razor – a game one time winner that went over two hours for her win . Some of you guys might not know that Blade Icewood won one off the chain in 17 before his career officially started.

1. was contracted into a dog man that had ties to the infamous Roadblock Kennels (a seasoned vet in the Midwest) and the weight was 37lbs, using a son of Champion Charlie. They figured to have a rough, fastlane hound that would bury himself into his opponent chest. Well that experience and presumption didn’t really go as scripted. They weighed in at 36, and Blade Icewood weighed in at 37, who was clearly bigger and almost towered over him. The Ref said “release” and this contest was really over before it even started. It lasted only 23 minutes, much longer than anyone anticipated. Icewood was proven to be the bigger, rougher hound that pressed him in his chest and rear end.

2. was into the Midwest finest, City Streets Kennel. It was hosted by True Colors’ very own Tony Rogers, may he Rest In Peace. The weight was agreed at 37 lbs. Icewood’s opponent was Huckleberry, a son of Champion Black Beast. This card also featured True Colors’ Persey, going into Icewood’s litter-mate brother at 41 lbs. Icewood was first on this card and after they weighed and washed it was on. This contest went just like the first one with Icewood being much stronger, smarter and rougher than his opponent. His primary focus was to get to the chest and rear end and he got there at will. This contest was over when City Streets’ dog stood the line at 27 minutes.

3. was into Jizzle, a son off of Fearnone-Dirty Glove & Game Blood Kennels’ Champion BG, The Baddest 42. Toney presumed that this would be Wood’s most difficult match, because in the previous matches, Wood had a breathing problem and if they would get passed Jizzle, they would consider retiring him. Well, most spectators also figured that this match would be a classic because Champion BG had Jizzle’s sire, go to hell and back to earn his title when he defeated BNK & LOD’s dog in an all out war. Every once in a while, a match would live up to the hype, and this contest proved to be a classic match from the word “release”. Both dogs swapping it out in the rear end. Both dogs displayed mouth, ability and gameness and nobody could figure out who would become victorious. Jizzle really did majority of his damage into Wood’s back-end, even pinning Icewood down, getting into his brisket, working over Jizzle’s face, all while trying to catch his breath. It went back and forth for a while until Blade Icewood switched it and changed the tide when he got deep into Jizzle’s rear and made a vow that he was not coming out. This contest went 1 hour and 40minutes with Icewood finishing Jizzle on the floor in his rear end and earning his Champion title. Before the start of his next contest, Toney decided to address Blade Icewood’s breathing problem and visited the vet. It turned out that Blade had a severe case of heartworms. The vet stated that he would be on heart worm medication for the rest of his life, but it would also help him out with his workouts and resolve this breathing problems. So after a long stint of getting his health in order, Blade got that junkie itch for some action. For his fourth, Blade Icewood was coming off a year and a half layover because of his last contest and his heartworm problem was finally under control. He was looking for a Champion or better and one was located…

4. was set at 38 lbs in the Carolina’s into Champion Gotti. Champion Gotti had blown right through all three of his opponents and they thought it would be four easy wins. It was stated earlier that most contest don’t really live up to the hype and this one didn’t. This was supposed to be the toughest contest for Blade Icewood and an easy win for Gotti. The only problem was that Blade Icewood’s breathing problem was now under control and from the release it was evident with Wood not wasting anytime and quickly taking care of business. In 30 minutes, Icewood is clearly too far ahead, working his rear-end hold. Icewood didn’t have any intentions of coming out and he didn’t until Champion Gotti was no longer here. Game, set, match! Wood refuses to give him up and finally was parted away from Gotti in an hour and a half. Now before I get to his 5th, I’ll inform you that it was a massive search party for Champions and Grand Champions. Grand Champion Coon was sold to some boys in the south and they were contacted, but didn’t want any part of Blade Icewood. They stated that Coon was retired, but did go on to win another one. Grand Champion Grip’s crew was also contacted, and they stated he was really retired. So we respectfully kept looking. After no takers for a while, it wasn’t until a reputable kennel from Ohio wanted a shot of the Champ.

5. was into Crybaby, a 1xw and 1xW O.T.C. son off Champion Ali. The weight was set at 38 lbs. and the day before the contest, Blade Icewood got out of his containment and ate himself full of kibble. When they arrived, 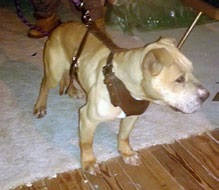 terms were discussed and they both decided to get it on. Blade was a pound over his contracted weight with a lot of dog food in his stomach. The Ohio players thought this was a disadvantage for Blade and it turned out to a big mistake! Blade took over from the word “release”, displaying mouth, ability and intelligence! Wood was in no hurry and he outclassed this opponent in every way. This contest went 3 hours and 23 minutes because Blade Icewood would not let go. This contest ended up being called by the Ref because his opponent had expired right there on the floor. This made Blade Icewood an official Grand Champion! Now fresh off his Grand Championship, the hunter soon became the hunted! Reputable kennels started contacting Lil Toney to get a piece of Wood, but one in particular just thought he had Icewood’s number. Dayton Ave Kennels was really high of their Champion Deebo. For their second win, they beat a Champion and for their Championship, they traveled across the states and beat a highly reputable kennel. Dayton Ave Kennels thought they can improve on their merits by beating a Grand Champion that recently went close to 3 ½ hours. The only problem was Deebo’s competition weight was 41 lbs. and Wood was contracted at 38 lbs.

6. Both camps were dripping with confidence and they both felt as if they couldn’t lose! So both sides decided to go at 40 lbs. Many thought that would work in Deebo’s favor because he was slightly larger, but at the weigh in, both contenders were under 39 lbs. and they were released. Well out the gate Deebo slammed Icewood in the middle of the box and that was literally Deebo’s only highlight! Icewood took over and became
the captain of the ship. He never looked back, working Deebo’s face, front end, and back end, literally breaking him down. Deebo was starting to fade and Dayton Ave asked for a scratch to continue because he was broken up so bad so, one was awarded. Deebo had the will of his pedigree and the heart of a lion, making a running, flipping scratch before the 10 count. The only problem was Wood picked up right where he left off, pouring it on the Champion. Dayton Ave made an incredible handle at 1:40, because Wood usually don’t like to let go. When the Ref said release, Deebo collapsed in the corner and was counted out. Wood made his courtesy scratch and was crowned with his sixth win.

Lil Toney’s Blade Icewood has the ability to outthink his opponents, neutralizing their best weapons and have it work against them. The reason he goes so long is because he has the ability to stay out of trouble, while being extremely patient, and dishing out punishment all at the same time. Icewood also really enjoys his work and hates letting go and that makes him very difficult to handle. He is still on the hunt, coming to a box near you!