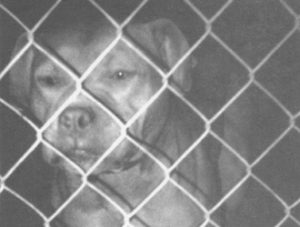 Bull had a rougher time of things. He was basically placed with some barnstorming dog who had the big, lazy Bull standing upside-down on his head in the corner, with his tongue turning blue. The kid who had this high-pressure Eli dog was grinning from ear-to-ear at what was going on, and they were about to pick up Bull, when suddenly Bull was able to get onto his attacker’s nose, and with one big crunch the entire momentum of the fight was changed. Bull proceeded to shake the bejesus out of this dog, whose tail promptly sank, and then suddenly it was the kid who was the one quickly trying to pick up his own dog. Yet still, Faron did not like Bull all that much and sold him to Gary Bell of Red Tide Kennels in New York. Sarge had a bitch called Raja, out of Wasik’s TJ and Wasik’s Rosie and decided to bred her to Bull. The breeding produced the dog we know as Popeye. I guess now it’s the moment to give the floor to Sarge…

Popeye’s first show was into Southern CT Bulldogs Kennels. He had a rough 44 lb. male for us. The time came and this Bevis was a lot bigger than Popeye at 44lbs. Bevis comes out barnstorming for the first bit. Popeye made a turn early, and later came back with good head holds hitting a leak on Bevis. Bevis pushing for the corners and Popeye never letting him get there. Popeye is digging in and Bevis starts to sing – name that tune! By the time 25 rolls around Bevis is fading fast. I made a quick handle, Popeye goes wide open and digs in again. Bevis is stretched out and he is picked up. He stands on the line when faced. Popeye goes hard to win it. Time :33.

Popeye’s second was into Double D Boys and their Crusty dog. He was a rough rear end dog. The weight was 44 1/2. They meet in the middle with a bang. Crusty wants the head and Popeye is on the head. This was an all out war for the first hour, with one on top then the other. At 1:10 Crusty gets to the stifle and so does Popeye. Crusty lets go to get a nose hold and get Popeye off the stifle. They swap nose holds and go to the mouth. Popeye gets hold of Crusty’s mouth and don’t let go for 15 or so. At 1:45 a handle, Popeye goes and is working a down dog, at 1:50 Popeye is in the throat going deeper and deeper. We get a handle at 2:03 and Crusty can’t go. Popeye goes hard to win. I’d like to say that this Crusty dog is a very game dog that gave every effort he could.

Popeye had some time off and collected a couple forfeits. I got him hooked at 45 and do not make the weight and I’m that one paying the forfeit. So now the dog has gone thru three keeps and collected two forfeits and I paid one forfeit. I do finally get him hooked, but three weeks out the other side pays the forfeit. Then a call from Team USA and we are going again. A lot of BS is coming from their side about what their dog is going to do to Popeye. Am I worried ? Maybe, but it’s on and we’ll be there. Were set for 46 and both come in light. Popeye at 44 1/2 and George at 45. They are washed and turned loose. Popeye is on the face shaking hard and George is doing the driving. George is the bigger dog looking to me to be about three lbs. bigger. Popeye is on the head doing lots of damage. Then George gets Popeye off and goes to the chest. At 15 George is pushing Popeye to the corner and Popeye is in hold, but trying to figure this George out. Popeye goes to the mouth doing some nice dental work. Popeye is slowly breaking down George. I got to the side of my dog and was calling him off – I practiced this in his keep – he let go and I got my handle. Everyone went silent then started to clap. George came and we got another handle at 45. Popeye hit the throat and started to work harder. George
started to stretch out and Matt called out “Stop it! It’s over!”. The time was 49. Now he was Champion Popeye.

Now it seems very hard to get him hooked, everyone is talking about how close to an ace he is. Nine months later we get a hit at 43 1/2 lbs. We are going after Mass Combine’s Pistol a one time winner. Both come in light at 42 1/2 with The Farmer in the middle. Pistol comes out barnstorming. Popeye makes an early turn. Pistol takes over in the chest and is taking it to Popeye for the first 10. Finally Popeye gets to the mouth and does some good work with some nice dental work and a leak on Pistol. Now Popeye gets his famous head hold and holds Pistol out. Popeye is riding Pistol all over the place. Pistol is pushing and driving to get to Popeye. Popeye starts to slow down and we get a handle. Now it’s Pistol who is taking over with good chest and leg holds. Popeye is working the muzzle. Both scratch hard and by the hour mark they are even. Then for the 54
bit’s real rough on Popeye. Pistol’s handler is making good handles and drilling Popeye in the corner. After 1:20 Pistol gets to the stifle and shakes Popeye off his feet and is working a down dog. Pistol goes from the front end to the back working a down Popeye. At this point Pistol is trying to finish Popeye and I’m thinking about picking up Popeye. Then Popeye gets to Pistol’s nose and works on him for a few minutes.
Pistol gets real mad and gets Popeye’s nose and shakes hard, then he goes to the front end and works over Popeye again. Then there is a handle at 1:35 and Popeye is to go and here comes Pistol like a shot and he breaks the boards apart hitting Popeye in the corner. The same thing on the next handle and Pistol is breaking down Popeye minute by minute. At 1:40 Popeye is in bad shape and it’s his scratch and he goes over stumbling, but he makes it. Then at 1:50 Pistol goes hard and is still working a down Popeye. At 1:54 Popeye to go and he steps out of the corner, falls down, gets up and stumbles, making a game attempt and misses Pistol by 1/2 second. Pistol is picked up into the air and Popeye tries to go after him but can’t. What a hard match.

I have to say that even though I lost that night my dog made me proud. I also met some super good dog-men that night. I would like to thank them all V. Camp for telling me that most dogs wouldn’t take what Champion Popeye did, and that he went out like a true warrior and Champion. The Green Beret, for helping me save my dog that night. Red Rhodes for telling I’d better take care of him, that he was a really game dog. The Farmer for telling me that most men would have picked up sooner and that Champion Popeye was a very game and good BULLDOG. Last but not least to Mass Combine for their medical help with Champion Popeye. As for Champion Popeye’s future he was going to retire to stand at stud. Unfortunately I lost him a short time later. He was a very good dog and I will always miss him! Gone but not forgotten! Goodbye old friend!