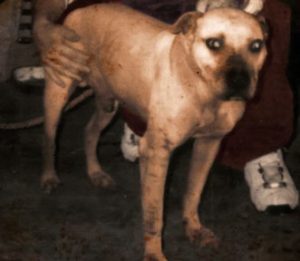 Flash started his schooling early and every time he was looked at he got a little better. When Flash was finished with school, we decided to use him in his first. We made calls in our area and got a show with Bud C. with males at 37. Bud had a partner and they had a dog that was bred from Loposay’s Buster ROM x Mountain Man’s CH Homer ROM named BB. This contest turned out to be Flash’s toughest match. He had to come from behind with stumbling scratches and stopping BB in 1:26. The Ref was Mongoose John. For his second, calls were made nation wide. The first to respond was Mush, with a dog called Hammer by his CH Calvin dog. The date was set and soon Flash & Co. were on their way to the swamps of the south. Hammer came out on fire. Then Flash quickly put his fire out, when the Ref, Red Ron, declared Flash the winner at 26. Soon after Flash was looking to add CH to his name. Separtist Sal was coming with a Sorrells bred dog called Rocky. He thought would surely destroy Flash. So, Flash was on the road again to the great North. When they met Flash really showed what he was made of. He destroyed Rocky in 56. the Ref was City Slick. At this point Champion Flash was just four years old.

So, now the Champ’s weight was put out again. Wee Willy responded with one of Bobby Hall’s dogs called Little Carlos, sired by Hall’s Carlos. Now, this one was really supposed to destroy Champion Flash in a bad way. Well Flash showed what a veteran he was, and he gave Little Carlos a very rough night. Flash forced Little Carlos to leave the party in a short 26. The Ref was again Mongoose John. Champion Flash has now won four with one more hurdle to go for his Grand Championship. Just one more step to join the elite of the game. Flash was still in excellent health and shape. No question about it he was going to go for the gusto. For this one we naturally wanted somebody big. Calls were made to CH Wiley with no response. Then a call was made to CH Joey, but he already had his crosshairs set on GR CH Texas. Then Separtist Sal called thinking he had seen a weakness in Champion Flash. He had a 36 lbs. dog by the name of Champion Little Joe. This time we were off to the Big Apple for this show. Little Joe was a very awkward styled dog, a hard driving rear-end dog. It took some time for Flash to figure out how he wanted to deal with Joe,
then he went to work. In a short time Flash was on a down dog. Sal picked up Joe to save him and Champion Flash was now Grand Champion Flash! This show went 1:16. Flash was still in good shape and we tried for a little while to get Joey to come out and play, but it just wasn’t to be for one reason or another, so Grand Champion Flash was retired at stud and a produced his share of top quality dogs such as Swat Team’s Mercy – who won in 1:30 dead Game, Swat Team’s CH Silly, Fast Lane Kennel’s CH Sassy, Swat Team’s Cleo, Swat Team’s Floppy, Swat Team’s Steroid, Swat Team’s Hoss – lost dead game to Champion Evander. Grand Champion Flash also had a brother named Leonardo’s Clyde, a two time winner, who stopped Real Deal’s Champion Evander in 33. He also had two 1/2 sisters by Bell’s Baby Jones; one is Champion Pepper’s Champion Brownie and one is Pepper’s Champion Black Gal, a four time winner. Also Cherokee Kennels’ Willie who was a
three time winner.

I would like to give special thanks to Grand Champion Flash for keeping me in the winning corner more than the losing one. Good luck to those with Flash dogs, I hope you enjoy them as much as I have.