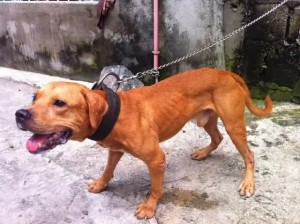 Ch. RTK’s JUMONG 4xW was purchased by Dong RTK as an eight month old pup. He was a double-bred son of Ch. Ren Ren’s DAREDEVIL 4xW,1xL and came from the breeding efforts of Ren Ren and Ariel who is now with TEAM CORVINUS KENNEL.

Not soon after Dong came to possession of the said pup, he and Jay RTK decided to bump JUMONG- just to see if he would start out early. They decided to try their new acquisition against a 1xW, 1xL brindle called TRIGGER. Upon release, JUMONG went for TRIGGER’s neck. Dong, Jay and the others who saw the supposed bump could not believe how an eight-month old pup pulled his own weight against a hard-biting, well-experienced gladiator, and thus the bump became a fifteen minute roll.

The same incident happened again when JUMONG was rolled again not long after. Jay thought it would be best to see how JUMONG would handle himself against a face dog, and so they rolled him against a black dog called JUNIOR. JUMONG quickly rode JUNIOR’s head and punctured a gaping wound thereat. JUMONG so dominated JUNIOR that nobody noticed that thirty-eight minutes had elapsed. Everyone present seemed to enjoy how the thirty-three, red Carver-BOLIO pup throw his weight against a much older dog, that the roll became what would have been a gametest to many.

For JUMONG’s third roll, he went against JUNIOR’s sire, a black thirty-six pound dog called DOMON. The bigger dog was first to get a decent hold a pop a bleeder. However, JUMONG broke free and gave him hell. Just a little past five minutes, the roll was stopped to spare the life of DOMON.

Seeing how well JUMONG had acted in rolls, Dong, Jay and the rest of RTK decided to hook the young dog up for an OTC match before they ruin JUMONG with rolls. At that time, RTK was negotiating with Maligno kennels for a match up between Kap RTK’s DIEGO and Maligno’s Joel 2xW, 1xL. So when Maligno Kennels said they also had a male open at 29 lbs, the idea of an OTC match for JUMONG was scrapped and they decided to hook it up with the said kennel for a contracted match scheduled on the same date and venue as DIEGO and JOEL’s.

A third match up between the same groups on the same event was also scheduled so the RTK boys pretty much had their hands full- leaving the much of the conditioning of JUMONG to Dong who have not had conditioned a match dog before. JUMONG proved to be a hard worker. He seemed tireless with the road work. However, he was not much for tread mills then, so it was Dong found it no easy task to get his dog into shape.

On the aforementioned match date, Maligno Kennels brought with them a white dog with a brown cow patch called LOCO for JUMONG. Upon release, LOCO proved to be the aggressor and forced JUMONG into a defensive position with ear holds. LOCO pressed on hard, and in the initial onset, it seemed as if the match belonged to him and him alone. Yet the moment he let up, JUMONG took the opportunity to take offense and punish LOCO.

LOCO was first to scratch after the initial thirty second out-of-holds count was completed. In his corner, LOCO was wild and raging to be let go. But JUMONG, who looked calm in his corner, was ready. Both dogs managed to swap holds without giving up an inch, but it was JUMONG who was very slowly coming into dominance. With every scratch, LOCO seemed to weaken while JUMONG stayed on top of his game. At the 1:48 mark, LOCO groggily lurched from his corner for a sixth scratch but was unable to complete it- making JUMONG a 1xW at the tender age of eighteen months. It was said that LOCO died not shortly after.

After a six month rest, JUMONG was contracted to go against another 1xW from GSK’s camp. The boys of RTK originally wanted JUMONG to face Paslang’s AK 47, but ultimately decided against it and opted to use VENOM instead. Eventually VENOM lost the match in 1:58 and JUMONG was slated to go against GSK’s NEGRO 1xW at 31 lbs.

NEGRO tried to dominate JUMONG early on but JUMONG stayed out of trouble by effectively holding onto his opponent’s neck, ear and scruff alternately. At the twenty minute mark, JUMONG had NEGRO on the carpet and was about to put him away. He managed to get a good hold of JUMONG’s front end and dished his own punishment. When NEGRO eased up a bit, JUMONG again took the opportunity to work the head, neck and front end of the black dog until the fight had gone out of NEGRO. Five minutes later, NEGRO was down and JUMONG was dragging him across the carpet. From then on, NEGRO could not get up and JUMONG continued to drag him around and punish the black dog at the same time. Dong would let his red dog rest and send JUMONG again to bite the fight out of NEGRO before the first thirty-second out of hold count was completed. In a little more than half an hour, NEGRO refused to budge from his corner and JUMONG became a 2xW. 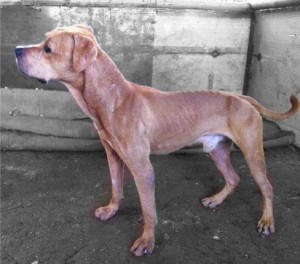 RTK found an opponent with another black dog from Amores Perros called ALPHA, who was a one time winner, for JUMONG’s championship match. Both dogs made the contracted weight of 31 lbs easy and the match was on. JUMONG worked on the defense early on as ALPHA proved to be the aggressor- trying to get a decent stifle hold. However, JUMONG’s defensive prowess proved a little too much for ALPHA. The black dog changed tactics by going for a face hold, but JUMONG brought his head down and managed a good hold of his opponent’s front leg. ALPHA tried to follow this move, but JUMONG was quick to take him by the ea and ride the head. Near the ten minute mark, ALPHA had driven JUMONG to a corner and managed a stifle hold. The Amores Perros camp was ecstatic. But their celebration was short lived, for in a matter of seconds, JUMONG rolled to safety and again rode ALPHA’s head. By quarter of an hour, JUMONG had a nice choke hold things gradually went downhill for his opponent. No matter how ALPHA tied to shake free, JUMONG stayed glued on his head. Five minutes after the half hour mark, the count was completed and ALPHA the down dog was first to scratch. ALPHA made a nice scratch and JUMONG was right there waiting to again ride his head. After JUMONG’s second scratch at 0:41, it was evident that the fight had gone out of ALPHA, as he kept on turning. Nonetheless, the black dog still completed his third scratch. At 0:45, ALPHA was pinned on a corner and retaliated very little. At 0:47, ALPHA lay limp on the carpet and JUMONG was mopping the floor with him. At 0:49, ALPHA refused to scratch back to JUMONG, making the RTK dog a champion.

JUMONG’s fighting days were not yet over as RTK was looking for payback from the loss they suffered from PASLANG and AK 47. After AK 47 also won championship, Jay wanted a match between him and JUMONG. PASLANG told Jay that the said fight would push thru once AK 47 had recovered and was fit enough to begin training again. This was fine by the RTK and so they were hooked once more at 31.5 llbs. Dong and Jay conditioned JUMONG, who now worked the treadmill effortlessly and he was ripped to go in no time. Jay knew that if JUMONG pours aggression early on, AK 47 might beat him. JUMONG’s early effective defense was just they would need, and thus the RTK camp worked that into their program.

On the match day itself, AK 47 made the mistake of going for JUMONG’s face like he did with VENOM. JUMONG was used to face dogs and so he held AK47 out effectively and then worked the neck and the armpit whenever he could. Every time AK47 tried to get into JUMONG’s face, the latter would lie down to force the opponent to take a scruff hold while he would clamp on the armpit. JUMONG had been fighting black dogs right from the get go, and AK 47, being another black dog, really irked the son of CH. DAREDEVIL. JUMONG re-channeled this hatred for the said color by biting harder and AK47 was picked up at 0:37. JUMONG’s fourth victory at age wherein he barely was three years old proved to be his easiest.