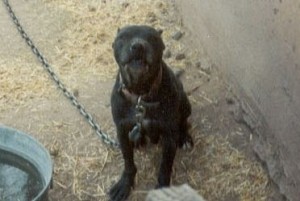 Chance’s first match was into Desert Rat’s Hammerhead and it was at 39lbs. Hammerhead came in at 40, Chance at 39. Since Chance traveled to their place in Arizona, it was decided to go for the match and not collect the forfeit, a big mistake. chance showed no mouth and was dehydrated. Hammer sucked up on that ear for 1:37 until Chance weak end and was picked up. chance made a scratch on his belly wanting mote that ear whipping he was taking.

Match number four and the opportunity for a dog that truly deserves to win a championship is made. A contract is made into Steve’s Spike again at 43 lbs. Spike came in light to the tune of 41 lbs. and is from unknown breeding. He had shown his worth by winning previously in 1:57. Chance barely made 43. At release, Spike went to the head trying to hold off Chance, but by :07, Spike had tired and Chance quickly took control of the front end and stayed there for :10 minutes. Spike was picked up and made a dead game scratch at :20 minutes.Chance’s second match was against Espy Kennels’ Rock and it was at 44. Rock was a brown dog from Jimmy Boots & Crum breeding and was said to have won two. Rock came in at 44 and this time chance came in at 43. Both dogs went at it fast to the front end and then swapping in the rear end. Chance’s mouth was getting to Rock and he slows. chance takes advantage of this and works the dog over. A pair of scratches each and Rock quits on his third at 1:05. It was time to step up so Chance was matched into Smith & Walton’s Tater at 43. Smith shows with a brown and white dog that was a son of Smith’s Blake. Both dogs came in light from the trip to California and they tip the scales at 42 1/2 each. Glen handled & conditioned Chance and is a member of Scratch N Stitch Combine. Tommy handled Tater and they start with a bang as they are both getting up in the hind quarters, then Chance to the gut. tater slows down and looks winded as Chance begins to get stronger. chance had Tater down by the :45 minute mark and Tater was not heard from again.

Chance lost his first one, but a lesson of bringing them to the right weight was learned.