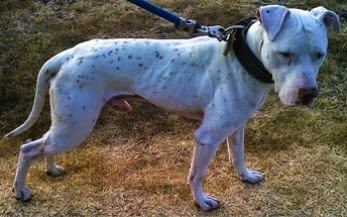 Merengue was bred by Pit Island Kennels. Santander went  to live in the USA for a better life in 2000… Having been born into dogs, Santander’s father had dogs from Clouse and Ed Crenshaw. After going a lot of phony dogmen, he befriended Mr Gotias and started his yard of dogs in USA. Being a long time admirer of gameness like his father he sought to purchase the gamest blood available and was referred to red boy dogs and then to Pit Island Kennels. Merengue was purchased as a pup and raised mostly in Austin, Texas. As an adult was sent to his father, Old Man Santander in Puebla Mexico!

The Old Man could not care for the dogs anymore due to health issues and so they were kept at Clavijeros yard. I had befriended the Santander family and cared for some dogs in Monterrey for his brother and cared for some dogs in transit. I contracted Sam Jr for his 4th and Comino for his second for a big International Convention in Mexico City and while there Jose called me and said that he had a red boy dog that he wanted me to take back home to Monterrey and look at to see if he looked good for a show. I said sure, and after the convention took the white and speckled red boy dog home to Monterrey, Mexico. I put the dog immediately to work and he was a great worker and I immediately bonded with the animal in spite of the dog not responding well to Old Man Santander, his two sons, or Clavijero, the dog was aloof acting and not interested in them but eager to work for me. I took a couple of pounds off of him and drove two hours to Reynosa to a show to see Ginger a 2xw that I had sold to STW. After the show we rolled him with a dog off of CH Pinky x Ch Solo named Terrorista. On release Merengue broke his front wheel in a compound fracture and then went for the finish which surprised us as not typical of red boy dogs. They went for a 23 kilo dog pure Diablo Negro x Cardenas cross and they went tat for tat.

The bigger stronger Eli dog getting in the stifles but Merengue picking him out and fancy on the ear, he showed great defensive skills and after the that we put a third Cardenas dog on him and he went back to the ear, but what was uncanny was his attitude in the corner, that red boy trait difficult to contain and screaming to get loose! I decided I liked him and hooked him at 45 pounds for another big show in Baja California into CH Paqiao. A month in keep I got a call from Mauris Kennels from Spain saying he was half owner of Merengue and how could I hook him as if I was the owner of the dog! I told him that J. Santander had asked me to hook him and that’s what I did. He informed me that he had paid Santander family their half back and [ medias para las mujeres] and that he was sending for his dog in two weeks, So I said no problem and used Sam Jr. as the replacement for CH Paqiao dog in Tijuana.

The man sent his yard boy for the dog and  found out he had showed him into a kennel from Holland I was told the dog did not look good as is understandable with a non mature hand walk keep and an aloof dog! I can’t say how it looked as I was not there what I do know is the harder punching dog quit at the hour and Merengue was screaming on his courtesy! Thank God for a Red boy’s natural wind and gameness because I know the keep was probably less than great! The dog sat on the chain for a year until the Santander Family traveled to Spain to get Merengue and another boomer gyp back which they have been to Spain twice for and with no luck of getting her back to Mexico! The boomer gyp was bred to a good dog for half the litter but the Santander half was given to Mauris’ uncle, nephews, brothers and yard boys as it was explained  when the Santander brothers went to Spain!

In any event Merengue was brought back to Puebla and I asked to use the dog for a show in Mexico City but he was lent Tequila and his brother instead. We then hooked Merengue into a 1xw named Tosco who was a double bred callejas Sara bitch which is litter-mate to Cuatrera POR Hardtimes bitch, Santander had sent to Sergio Callejas from USA. Merengue worked well for me and I knew we were going into a hard punching eli dog so we had to be right! At show day Tosco would have made short work out of us as he had won in less than 15 minutes showing hard mouth. Tosco bit nothing but air as we held him out by the ear until he went down at 27 and we went for the finish and forced a pick up at 31!

Merengue was now a 2xw and was hooked the same weekend into The Club America camp from Mexico City! America using a 1xw from the Fake CH Tank from Taurus kennels, he is only a 1xw but his two sons had won in short order.

Pinocho was a Dragon Fire Buck bred dog bred to a bitch from CH little Buck to a Kohller Red boy Jocko bitch on bottom and was said to literally take chunks out of opponents! 8 weeks later we show up supposedly D.O.A ! Our camp showed Ch Littlebuck so were aware of the mouth that those dogs pack and their high ability. We had to survive 30 mins in my book and on release Merengue went straight to the head and Pinocho going for the body. We are the taller and longer dog but not the strongest as I pulled him to 45 pounds from 48 and did not have the explosive power I am accustomed to! When Pinocho did touch us it blew up like a baseball or 4 bullet holes! Merengue stayed fancy on the head and punishing the ears and the throat when he could… but Pinocho would not lie down. A turn called on Pinocho at 40 and Merengue is going nuts in the corner and growing with each scratch at one hour and 40 its is clear we are ahead and really punishing twisting turning and shaking deep in the ear drums and Pinocho is being walked across the pit! At the one hour and 55 I make a handle and Pinocho does not even get to his feet but stays curled up in a ball! Merengue is going nuts in the corner at two hours giving a spectacular courtesy! We are proud of our smart game head dog and will put some solid red boy bitches under him as well as some of our Hooten’s and our HardTimes eli stock! Thanks to The Santander family for allowing me to train at their ranch and the confidence to show him for a couple! Merngue is no longer a young dog so will be used as a stud dog!