Hitman 2 was born in the summer of 2011. His sire was also a match dog – by the name of hitman – that was 1xw and 1xldg, and his dam – STAYGAME’S MIND YA BUSINESS – was purchased as a brood bitch. He is a line bred down from Grand Champion Buck. As a pup he was always a little people shy and that carried on into adulthood , but he always showed confidence.

At around 15 months old Hitman 2 was showing curiosity toward other hounds, so thats when his schooling started. He controlled the other hound quickly showing his love for the head and shoulders. We that schooling session around 20 mins and put him up for a few months. He’s 18 months before I touch him again and this time he go’s uphill a few pounds to show his worth. needless to say Hitman 2 controlled the bigger hound while still showing the same style as his first schooling. After all of this, I then wanted to see if he was there for the long haul
and look at him closer to pit weight. I cut his food back for a while and this time he was 32 pounds. Once again he showed the same as I took he into 45 mins. At two years of age, I get a call from a friend of mine the that claimed to have a little monster that was near my weight, so I abliged. In just 17 short minutes later he had packed it in, and I then knew Hitman 2 was ready for the fast lane.

I traveled 4 hours this warm and humid morning for this show. Hitman 2 came out of the corner first taking hold, but Mamba quick took charge as he was throat checking Hitman2 for the first 15 mins. This was the first time that Hitman 2 had ever been in trouble and we didn’t know how he would react, but he stayed calm and found the head and quickly figured him out and then began to wreck the chest and shoulders. At 1:01 Baby Mamba was collapsed in the corner and did not run one single scratch. rip to him and welcome Hitman2 1xw as he made a beautiful scratch to win. About 4 months after that win Hitman 2 had to have surgery on his stomach and intestines. There were a number of things inside of him that he had been finding a way to eat on, that were stuck in his body. All of this was unknown during his keep and his first match, but the surgery was a success and 8 months later we headed out overseas to the Caribbean.

Top Choice Kennels had been awarded 2013 Puerto Rico’s Kennel of the Year, so I knew I was going into very stiff competition. I knew the environment was a little different then Hitman 2 was use 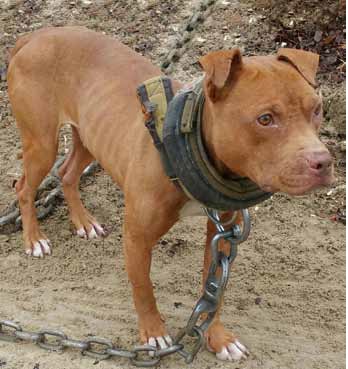 to, so we arrived a few days earlier. In the rain forest is where we were headed, but none of that made a difference with Hitman 2. He was the opener that night for a 9 card convention. Upon release both began to swap it out back and forth. Top Choice was showing rough and a some mouth which is not changing Hitman 2’s mind the least. Hitman 2 then go’s for what he knows and starts to work the head and shoulders, but to my surprise he started to work the rear end as well as the throat. Top Choice starts to turn due to the heavy head chewing that he was receiving. Handle were made with Top Choice stumbling over, then I quickly made a handle and Hitman 2 shot across jamming him in the corner. Shortly after another handle was made but Top Choice showing huge heart could not make it as he was falling and flipping over at 1:05. Here again Hitman 2 only needed to scratch to win and he did ever so strong. Soon after Top Choice expires. D.O.A. Special thanks to Twin City Kennels for Keeping Hitman 2 2xw as he recovered.

I’m the opening act again but this time I’m south of the border in Mexico and I’m at 32.5 pound this show. Ch Sergio was a black Eli male that was built like a Mac truck. Ch
Sergio came out barn storming with heavy mouth, that I had not run across before. He was bitting like a crocodile as he tried to take my front legs off. Even as Hitman 2 worked his head Sergio still found a way to get back to his sweet spot. So just like before Hitman 2 adapted and went into his shoulders but tis time it was different he went deep, I mean real deep, all the way to his back teeth deep. At 35 mins Sergio got to my leg real serious and broke it, but I wasn’t sure because Hitman 2 was still putting weight on that front wheel. Between 45 and 50 mins Hitman 2 tucks both of his legs back and go’s in for the finish. He drive Sergio from one wall to the other and dismantles both of those shoulders. There were no turns or out of holds at this point, so at 58 mins they tell the ref that they are picking up but they wanted to show game and make a game scratch in front of all at the convention. As Sergio comes out of the corner about three feet, his front end gives out and he is left there only to flop around like a fish. Meanwhile Hitman 2 is in my arms bucking to come out and finish the job my opponent runs out, grabs Sergio and leaves the box without allowing me to scratch. I just smiled collect my purse and gave Hitman 2 a hug for a job well done. R.I.P to Sergio and hello to International Champion Southern Braveheart’s 100% Hitman 2.