On December 8th, 1991, GR CH Tornado made bulldog history. She became the first ten time winner and DOUBLE grand champion in history. With all great bulldogs there are people that detract from the achievements of these animals. Who Dbl GR CH Tornado could have beat or couldn’t is a matter of one’s own opinion. Who she did beat and who she didn’t is a matter of record. 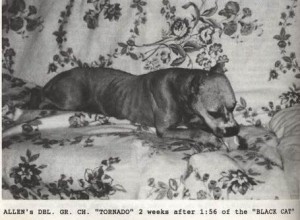 She beat “Emma” in 1 hour, 17 mins. Tito of the Local Boys was next in line and his bitch did not last the half hour mark and T. Garner and Raheem’s bitch went out game in half that time. Rastaman brought opponent number nine in the form of Boone’s Sadie, she was wisely picked up at 45 mins. Her tenth and final match was against the Canadian Francois Shobinoe, a man that brought a very game and talented bitch. It officially went 2hours, 34 mins. A wager was made on Tornado’s gameness and ability to finish a dog. At 3 hours and 18 mins in 25 degree weather, she was broken off her expired foe and then scratched back to it without hesitation. (most dogs will not do this)The facts are that the list of notable dog people she beat is among the top the game has to offer today. Her first match was into STP’s Miss Piggy. STP was quoted saying, by a close source, that if he could get the bet covered, he would mortgage his house that Ken’s 13 month old pup could not possibly beat Miss Piggy. Luckily for this proud fellow, the bet was not called as Miss Piggy was victim number one.

All of the above dogs failed to live under Dbl GR CH Tornado except for one. All of them scratched dead game. She won her first at 13 months, and her last at the age of seven years old. Tornado’s total fight time was 10 hours, 20 mins. She killed three of the dogs without getting one puncture in her skin. Her 8th and 9th matches were only 3 weeks apart from each other.

Many people say that Tornado did not produce. But what people don’t say is that she was only bred twice and many only took those and bred them back to her father whom was a ROM. Though, she did produce two known 2x’s including Ken Allen’s Movin On.