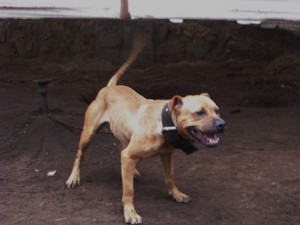 Bola de Fuego was born from the first breeding between Bambu, who is a son of Bam Bam and Tabatha, and “Bola”, a daughter to Ironboy and Bruja. This was a planned breeding by Revolucion Kennel on the basis that Bambu has always passed onto his descendants a good degree of mouth and good fighting style, while Bruja has always passed incredible intensity and fighting style onto her descendants. This breeding proved to be the perfect combination.

Bola de Fuego came from a litter of three puppies and from a young age, Bola de Fuego always showed to be real active and crazy with respect to her siblings. Due to these unique and special characteristics, we became very fond to this special dog. Even though, Bola de Fuego started being schooled since a very young age, she always finished her opponents quickly, never even reaching the ten minute mark and leaving them in really bad shape. After her third roll and due to her vehemence, biting power and the damage she inflicted on her opponents, we realized that with a good keep, she will not have a rival. This is how we took the decision to match her and we got her hooked for her first match.

Set for December 20th, 2008. “Bola de Fuego” vs. D’Crijals “Matrix,” both half sisters from the father side. As usual, “Bola de Fuego” goes directly to the chest, securing an intense and powerful bite. The violent bite left “Matrix” without possibilities, who after two minutes tucked tail in a way that the spectators thought that she was a cur, who only tried to escape from the terrible bite power. When “Bola de Fuego” switched holds, the crowd was astonished of the bite power and damage inflicted. The fight continued on the same way and after ten minutes “Matrix” was extremely injured due to the damage inflicted by “Bola de Fuego.” “Bola de Fuego” finished the fight with a bite to the stomach that left “Matrix” with a mortal wound and who by then had resigned to only block the attacks. “Matrix” performance left our team and the public with the idea that she would not complete courtesy. Matrix’s” owners picked up at the fifteen minute mark but she completed an incredible dead game scratch. This is how “Bola de Fuego” got her first win and took the B.I.S. trophy. The same night and due to D’Crijals request for a rematch, “Bola de Fuego 1XW B.I.S.” was hooked for her second match.

Set for June 6th, 2009. “Bola de Fuego 1X BIS.” vs. D’Crijals & Southbeach “Bala.” “Bala,” born from a breeding between “Balin” and “Dinamita”, both from Southern Kennel (Ecuador) breedings. Bala was chosen with the main objective to beat “Bola de Fuego.” “Bala’s” owners reassure that this time “Bola de Fuego” will not take the win home. As always, “Bola de Fuego” came out to do what she knows best, by securing a really good bite to the chest, but “Bala,” in a skillful way, was able to free herself from the attack, by biting “Bola de Fuego’s” face and shaking her body powerfully. In response, “Bola de Fuego” gave her another bite to the chest, with the intensity that characterizes her. This is how the fight became a two way fight, but “Bola de Fuego” always kept the upper hand. Thanks to her hard bites, at 15 minutes of fight, “Bola de Fuego” was able to submit “Bala,” who unsuccessfully was trying to defend the attacks. “Bola de Fuego” was attacking the throat in a way that “Bala’s” owners were asking to stop the fight to prevent the death of their dog. At 25 minutes of the fight, D’Crijals picks up Bala as requested by Southbeach Kennel, since “Bala” had no place in the pit anymore. “Bala” completed a dead game courtesy scratch. That night, “Bola de Fuego” showed her superiority wining her 2XW and second B.I.S. in a 7 card Convention. “Bola de Fuego” took not only the compliments of the public, but also from the critics, as she demonstrated her greater superiority against her opponents. Even though, the comments were not true about “Bola de Fuego” they still put a stain on her reputation, as they made it look like her wins were given away by the opponents, due to the big difference in there qualities. Rocas & Orbab Kennels, who are owners of CH Lupdav Jr 4 XW, and who won on the same night, asked to be given a chance at her. They assured that they had the weight and the dog that will kill “Bola de Fuego.” This is how “Bola de Fuego” gets set for her “Championship match.”

Set for October 31st, 2009. A big day for “Bola de Fuego”, who was looking to become a champion. Her opponent was of Eli/Boudreaux and Little Gator blood. That day, there was a problem with the weight, as the opponent had an extra 500grs and “Bola de Fuego” was 200grs under due to the road trip to the location. Due to the disadvantage of 700grs against “Bola de Fuego,” Rocas & Orbab Kennels were required to pay forfeit, but we (Revolution Kennel) decided to go ahead with the match regardless and that is how both dogs entered into the pit. As always, “Bola de Fuego” went directly into the chest of “Bootlegger,” who by applying a strong bite to the face was able to break free in a skilful way. This is how the punishment to “Bola de Fuego” started. “Bola de Fuego” was against a bigger opponent, with high ability and a harder bite. It is in this moment in which we realized that “Bola de Fuego” was not all bite and vehemence only, but that she also had other skills, demonstrating high ability, securing bites when the moments presented, by taking advantage of openings, and controlling the bites of the opponent, who kept punishing the face, chest and stifles of “Bola de Fuego.” Regardless of the punishment applied to “Bola de Fuego,” her heart and gameness were able to oblige “Bootlegger,” who by the 45 minutes rejected the fight. This change of pace allowed “Bola de Fuego” to be the one applying the punishment. With a recovered “Bola de Fuego” and with more presence in the pit, and with an opponent running throughout the entire pit, Rocas & Orbab decided to pick up at the 53rd minute. Rocas & Orbab decided not to courtesy scratch. That night, “Bola de Fuego” proved to everyone that she was a real champion. She also proved to be the complete package, shutting up past comments made about her previous fights. This is how, against all odds, “Bola de Fuego” won her Championship and became: CH Super Bola de Fuego 3XW (2 B.I.S.) (1 G.I.S.).” Revolucion Kennels