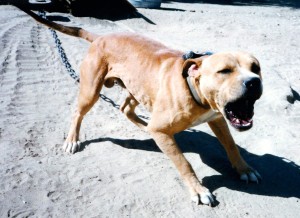 CH Leonard beat and stopped my Mack dog in :37 at a weight of 42 lb. Mack was a natural 40 that I brought up to 42, while Leonard was a natural 44 that was brought down to 43. I took the forfeit and I spotted the weight and bet the forfeit on Mack. Mack out-speeded and out-slicked Leonard for about :25, as he was a terrific head dog. Leonard turned but went very hard. When Leonard finally got to his money spot, the throat, at about :30, Mack went downhill immediately. By :37 Mack was dying, and when a handle was made Mack stood and Leonard courtesied. Mack tried to jump the pit when Leonard courtesied into him. (Mack was by Patrick’s Fearless Jr. out of Vise-Grip’s Lady Tomahawk).

Leonard then faced G&G Combine’s Buddy. Again, Buddy was way ahead of the slow and not very athletic Leonard for about :20, but when Leonard got that bear-trap mouth on Buddy’s throat, it was over by :32. Buddy literally a stream up in the air as Leonard rooted into his spot. Leonard was very deceptive. He didn’t look like much, athletically, but when he hit that money spot it was Game Over.

Meanwhile Poncho won over S&S Combine’s Dragoon in a total shutout in :32 at a weight of 49 lb. S&S traveled over 600 miles to beat Poncho with a leg-amputating destroyer, right off of CH Rattler. Poncho totally outclassed, and then downed this one-dimensional destroyer, with a smooth and cool defense and absolute authority that has become “The Poncho Trademark.”

The ref even made a comment “He fought a perfect fight.

After this clinic in canine performance, I agreed to bring Poncho 1xW into Leonard 2xW (to avenge my previous loss) and I agreed to a weight of 45.5 lb for Poncho and 45 lb for Leonard. Although Poncho was a natural 47.5 – 48 lb dog, I reasoned Poncho never really was a “mouth” dog but was just an untouchable tactical dog. I had had Poncho at 52 lb against 57 and 60-lb dogs, and he totally routed them with his untouchable style and tireless stamina. And after anything “got hot” on Poncho, he would roll them over and finish them. He did the same thing to Dragoon.

I figured that, even a little light, that the slow Leonard 2xW would be a cakewalk for the superb Poncho 1xW, and I even said, “Poncho could have parvo and still beat Leonard,” so confident was I in Poncho.

This photo was taken 11/17/95 and the deal took place Saturday 11/25/95, just over 1 decade ago exactly. Poncho was at his agreed-upon weight of 45.5 lb in this photo, way underweight, but after 8 more days and a 3-hour drive, Poncho came in at 44 lb … 1 lb less than Leonard … but 3.5 to 4 lb less than his best weight. In my totally-green ignorance, I simply did not see how my POOR MANAGEMENT took every bit of steam out of Poncho, and made him so weak that his legs just started buckling underneath him by the :10 min mark.

Poncho gamely tried to do everything he could to hang onto the head, and keep himself out of trouble, but he was just too weak to do so effectively. Leonard started to run hot by :30, and that would normally be the moment Poncho would go for the finish, but all he could do was hang onto the ear. Again, the turn was called on Leonard as he blew hot a bit, but Leonard came across like a freight train and piled Poncho into the corner.

But it was Poncho who got the hold, even though he was limp on his back, and that was all he could do was just “stay in holds.” No, he did not look “great” from a performance standpoint in this deal, but I had seen him be absolutely PERFECT and untouchable every other time before, when at a healthy weight. This time, while all he could do was weakly hang on, what he did do was STAY UNTIL THE END, when I realized he would be dead soon to a throat-killing bear-trap in Leonard, and so I asked Big Ernie if he would scratch to win. He agreed, and again (now) CH Leonard pile-drived Poncho into the corner on his winning scratch.

I was asked to scratch Poncho and even though he could hardly stand at this point, he was still struggling and looking around my legs to see Leonard, and when I faced him he went immediately and took hold.

And that is it, and that is all there is to say, and anyone who says different from the above is a GD liar. CH Leonard was a deceptively-dangerous dog, and he beat a 4-lb-too-light Poncho that was a shell of himself. In truth, the dogs should not have faced each other, and CH Leonard would have lost just as surely to a 48 lb Poncho as a 44 lb Poncho lost to CH Leonard.

All I can say is that I fucked up and lost that day, and that Poncho never would have lost to any dog that breathed at his best weight, when in top condition. And I will never change that opinion in my life.

So deeply did I believe this, that I based a bloodline on Poncho, and there is not one dogman who has anything bad to say about me or Poncho who has surpassed in the last 20 years what Poncho has produced in the last 15 years. Not a single one.

Yet all of the people who have believed in Poncho, and in his bloodline, have succeeded. EVERY one.

So while I may have fugged-up in Poncho’s second show, I hit the bullseye in recognizing how good he really was, and what he was continually thrown, over and over again, and (now) for generation after generation proves that my belief in him was well-placed.

Thanks to those who have always believed in Poncho.