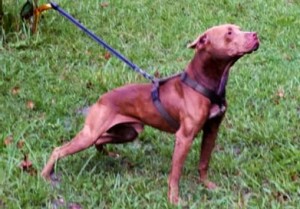 Triangle Gang’s Grip was bred old man Riley out of Triangle Gang’s Houdini and HOF’s Ch Codie, a double bred Gr Ch Andy Capp daughter of Steve The B.C. Boys’ Gr Ch Snaps. As you may know ,Houdini is a son of Evolution Kennels’ Gr Ch Macho Buck R.O.M., Dog Of The Year 2004 and out Ch Sable bitch. Grip was raised by me since a pup. Now , I know it may sound pretty odd , but I didn’t liked him as a pup…he never did anything bad , I just didn’t liked him , so at about 14 months I gave him back to the old man and told him good luck with him , you can keep it , he worth sh*t! As you can imagine, the old man laughed, and said “you can’t judge a dog on how he looks ” I said “OK, if you like Grip so much why don’t you trade him for Ecko?” the old man said “Hell no , they are both mine”. Three days later Grip broke off the chain and killed Ecko in a chain accident , Ecko being a 46 lbs pit weight and Grip being a 38 lbs on the chain . It was karma , I guess , or fate.

After some schooling the old man called me that he was going to hook Grip, which I found kind of weird because as far as I knew the old man was retired, so he must thought he had a real good one. Anyway, we found a hook fast and went with Southern Kennels’ (USA) Spider Man. We agreed to do them on our side, the deep south, eight weeks later. The day has arrived and both came in sharp on 39. After the wash it was time! Release you dog! We knew that both will bring the pain. Spider Man came across trying to rip chunks out Grip’s face, but Grip stood calm, waiting for his chance. It took him about ten minutes then he started to put it back on Spider Man. Both dogs swapping grips, with Grip crushing Spider Man’s shoulder around 30, making Spider quit in 43.

For number two we contacted Big Man and Carol of A.O.D. and it was on with their 4 Way dog at 39. We put up the forfeit and eight weeks later both dogs on point! Grip got ahead fast with 4 Way staying out of trouble swapping and hiding, so Grip had to punch when he could. The pressure was waz too much for 4 Way, so Big Man and Carol decided threw up the sponge at 43. For number three Grip was hooked at 40 into the “unhookable” AC, a two time winner, who silenced both of his opponents owned by Mr.Corey and Dead Game Kennels. After some talk, we agreed on one thing: no bullshit, let the dogs decide the show! Well, in spite of AC’s infamous reputation, the old man said this wasn’t going to go over 45, Big Man was reffing, and he was looking at us like we were crazy! AC was a back dog, a real demolisher, and on release he came out fast and strong. Grip had to figure him out…which he did: AC didn’t liked to get bit in the back end! Well, only 38 minutes later AC stood the line and Grip made Champion. The old man was right, Champion Grip wasn’t gonna go more then 45! After Grip’s third I contacted Lil Eye, a real good friend of mine and a well know dog man to ask him if he could hook Ch Grip for me ‘cause it was getting hard. He said “no problem! I know some boys that don’t like Grip, but it’s not gonna be an easy win. You’ll have to do it at 40 and go to them”. The deal was done and eight weeks later we met up with the St. Pete Boys and their Bebop dog. Bebop came out hard as hell. Ch Grip was kinda sluggish, just keeping Bebop off him. All of us looking kinda crazy at one another like “OK, thats Grip, but why he isn’t all the way on Bebop?”. Well, around the 20 minute mark, Grip finally
switched to second gear and the St. Pete Boys knowing it was over, picked up Bebop at 38.

Number five…wow…this time Grip was put through his hardest test of them all. We challenged Searge’s Gr Ch Red Man, an eight time winner out of Lewis’ Candy Man and Lewis’ Crunk ! Well, we all knew there are going to be far more people happy to see the old man lose then win, but we went for it anyway, because that’s how we roll. After a drive somewhere in the deep south we arrived on site, and all was set up. Both dogs on point! The old man spoke up, once again, saying “this ain’t gonna go longer then 45 min”. Off the release Grip broke Red Man’s shoulder never looking back. Red Man tried to hold on. Grip ran hot and so did Red Man, so both took a ten second out-of-hold count. Red Man, being the bottom dog, had to scratch and he made it slow, but he made it. The old man got a handle on Grip and he came out harder then ever! Red Man didn’t! The old man got another handle and thirty seconds later Red Man stood the line at 30 making Triangle Gang’s Grand Champion Grip! Old man Riley was right again, Grand Champion Red Man never made 45.

Triangle Gang’s Gr Ch Grip is a world class animal and a true grand champion. He beat the infamous eight time winner Grand Champion Red Man in only 30. At that time it was thought that Red Man was the best 40 pounder in FL, if not the Country, but once again, from the deep south, we proved that we don’t hide behind our papers, we stand behind our dogs: Ch Stretch, Ch Sable, Ch Quazar, Ch Demon, Ch bandit, and now GrandChampion Grip!