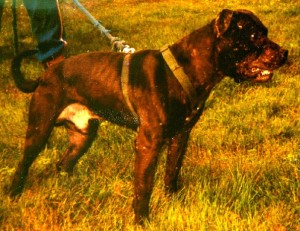 Ch. Bullet was bred and raised by BMW Leonel from Mexico. When Bullet was 9mos old he got loose and chased a cat with Leonel right behind him. Well the cat went one way and Bullet hit the brakes to slow down and ripped all four pads off and chipped his hanger. The next day Leonel went to see some rolls. One wouldnt start, so Leonel went home and came back with the young Bullet. To make a long story short Bullet handled himself very good and his career was under way.

All of Bullet’s competition was the best that each Knl had to offer.His first was against a Gold Finger dog. This one was suppose to be a unbeatable dog. Well Bullet made fast work of him in 17min.Then there was the very publacized Hot Rod dog from Coleman’s yard. It took Bullet 40min to take him apart. Then Bullet took out his half brother in 50min who was suppose to be a better dog, but not that night. Bullet preformed like a mechanic. Ch. Bullet was sold and went to the east coast. Everyone said that the harder the competition the better Bullet would preform. So Hard Core & Stone City had a 2xw named Yellow Man. This was also suppose to be a unbeatable dog. Ch. Bullet traveled over 2,000 miles for this one. Bullet showed that this bloodline could compete with any and in 1:05 he was declared the winner. I dont know of any other dog today that has won on two different coasts and in Mexico as well.
Ch. Bullet has won in Mexico, California & on the east coast. He has defeated all of his formidable opponents, with everything that you can ask for in a box dog. This is the only champion, let alone 4xw off Ch. Black Angel. Black Angel’s stud career was cut short due to a yard accident. If you are looking to breed to a proven animal from a proven line then this is the one. Ch. Bullet is also closely related to multy time winners in the fast lane. His half brother, BMW’s Ickis, won Gamest In Show twice in 2:30 & 2:40. Finally, the line can get it done in a hurry or stay for the long haul. Ch. Bullet was bred to preform and produce game and mouthy winners in the fastlane, which is common for the Lil Gator dogs.