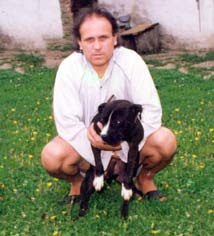 Little Black’s dam was Garrett’s Sugar III, a game tested double daughter of Crenshaw’s Ch Jeep R.O.M. making Little Black a straight Jeep/Rascal bred dog. Now, it’s a known fact that more modern dog men used dogs from the Jeep bloodline than any other bloodline. Along with the Rascal dogs, these bloodlines produced some of the top dogs of the time period, and James Crenshaw was the main source of both bloodlines. Dusan “Dule” Milatovic took Little Black to Serbia when he was only six months old and grew into an extremely people shy dog, a menace to other dogs on the yard. He was often acting crazy, destroying his doghouse, chewing chewing everything he could get his mouth on, no wonder he ruined all of his teet at a very young age. That was the primary reason he was never matched. Anyway, Dule liked the dog and thought enough of him to use Little Black as his main stud dog. Unfortunately, having no other options, Little Black’s first breedings were to average to bad quality bitches, mostly bred down from Hammonds and Sorrells pedigrees. Hell, some of those bitches quit in under 30. Anyway, it seems Little Black wasn’t aware all of this beecause it didn’t stop him to produce some really great bulldogs such as Dule’s Bela, a bitch that lost dead game in 1:45 against the highly regarded Ch Sweet Becky. Black also sired the one time winner Dule’s Crni 1xw, the two time winner Juga & Bata’s Soko abd Sale’s Lil’ Sugar, who won one before losing to to Ch Astra.

Little Black was then bred back to his daughter, Sume’s Berta to produce Crni’s Ch Ray. Most of his life, Little Black wasn’t open for public stud, so he never had the chance to prove its true worth as a producer. Anyway, I don’t know if it was a money thing or a sudden realisation of time running out, but Dule made Little Black finally available for public stud. By that time he was already an old dog, but when the ‘old man’ finally got his chance…

Their deep gameness and good air, combined with an honest mouth, was the main trait of the Little Black dogs. It’s a pity most of them ended up in the wrong hands and never had the chance to perform at their peak potential in the box, but proved their producing abilities… just like Little Black did years ago: Peca’s Ch Krik produced Krik Kennels’ Puma, a bitch that won her first in only 14. When Nike’s Kety Jr was bred to a double son of Little Black, they produced Nike’s Kama. Suja’s Tango produced some very good match dogs as well, one of the most being Cmi’s
Charlie. When P&T’s Baby was bred to a double Chan’s Floyd bred male, they produced the deep game P&T Kennels’ Ch Nickody, a dog that later was sold to USA. I bet most of you don’t even realise that Seki’s Tiger, sire of the eight time winner Seki’s Gr Ch Vetra, is a grand son of Little Black. I would proudly add that it wouldn’t be a stretch to say that Little Black was one of the best producing dog in this part of the world…the Balkans.