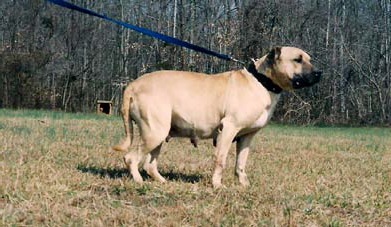 Lady Stone was sired by Fox’ Little Stone and out off Ginger. These two dogs were the product of the breeding program of ole Butch Fox who was started in the dogs from the influence of his older brother Edward Fox Jr. Butch was one of the most respected dogmen in the Greensboro, NC area, he ran around with the best in the game during the early seventies. His main influence on the yard was through the dogs he got from JR Loposay out of Sanford, NC. Butch was a dogmen that believed in breeding best to best and getting the best he could get. Most of Butch’s dogs went to people that were not dogmen, but the few dogmen that got some of Butch’s blood were quite successful. Butch Fox was born in Greensboro, NC in 1944 and passed away in 1986 at the age of only 42 years old. Some of the dogs that came from his kennels that were quite memorable are Boone’s Butchy, Fox’ Little Stone, Fox’ Sandy, Boone’s Two Toes, Boone’s Turbo, Boone’s Batman and his sire and dam Black Jack and Crystal. This pair were brother and sister to Champion Lady Stone’s sire, Fox’s Little Stone that were all sired by Fox’ dead game Big Stonecutter. Butch passed away a many years ago and in respect for him I want to mention more than one of his dogs in this article. He had bred this one dog that Boone got a hold of that was named  Turbo. He was lanky and strong, and he had won a long epic battle against Cottingham’s Hatchi. It was a set up for
a great match between Cottingham’s Boomer and Boone’s Turbo. These two dogs came in at 46 and went at it wide open to a point were Turbo showed to be dead game when he lost at almost three hours.

Butch bred many dogs that proved to be very special but Champion Lady Stone is far above the bunch of them. If Butch had lived to see this bitch go he would have seen his goals achieved and surpassed as Champion Lady Stone went on to become one of the most famous bitches of the eighties. Lady Stone started fighting at the age of 16 months old when she was rolled out just a few times, showing plenty of ability so she was taken out at a young age and was not game tested before her first match. Each time she was rolled she never got her hurt, so Boone went for it and he matched Lady Stone at the age of 19 months old into the combine of Willie Nelson and Wayne Pagan. This was at the time they were at their peak in the game. Willie and Wayne had won more than 20 matches straight and they were planning on making it one more with the match into a young Lady Stone. It was bitches at 41, but Lady Stone came in at 41,5 and Willie and Wayne’s dog came in at 43. The match weight was 42 and the ref was Carolina Sweet Boy. Lady Stone was in control from start to finish and she won in one hour and six minutes. She won along with her brother Turbo that night. Well, a short while later, Boone and Tant hooked up with these two bitches, both being hyped as being aces.

Well, the match was a disappointment as Lady Stone eat the bitch up and had Miss Yellow taking the count in 22. As Boone was doing his thing with his 44 pound bitch there were two other bitches in the country battling at this weight: Havana Boys’ Champion Blondie and the double Grand Champion Tornado. Well, Blondie drew the short straw and is matched into Lady Stone on a cool December night. Shortly before the fight Ricky Jones told Boone that if Lady Stone won the fight he would arrange Tornado to fight Lady Stone as her next opponent. Havana Danny comes in with Biondie at 42, and Boone comes in at 43,5. The weight is 43 and Boone pays the forfeit. Sonny P the judge. These bitches hit each other like two whirlwinds. Stone on the head and Blondie in the chest. They are sluggin’ it out for 30 and it seems that Blondie is ahead as they are betting 1000 to 500 against Lady Stone. Boone is starting to look nervous as his dog’s blood is spilt all over the pit. Lady Stone is bleeding badly and it looks bad for her. At the 40 minute mark they both went into a heat for a few minutes and Lady Stone came out of this simultaneous heat first and zeroed in on Blondie’s head. Blondie immediately started to play a different game and was backing up and fighting the head, she had come out of the chest. Now as they fight head to head, Lady Stone takes control and at the hour mark Havana Boy’s Champion Blondie makes a turn to the right and then broke for a run to the left. A turn was recognized and the referee says to handle when ready. Blondie to scratch. It was hard to handle Lady Stone as she was working a down dog. Stone’s mouth was so fast that it
was unbelievable. One moment she would be on the head and in the wink of an eye she would go to the stifle, then back to the head and chest. It took until the 1:30 mark to make a handle. Blondie to go and she does to the surprise of the crowd. It takes another 20 to get a handle and Lady Stone to go. She does and hits Blondie back into the boards. At 2:06 a handle and Blondie to go. She does in the wrong direction and takes the count. After the match Lady Stone was bred to Red Ike who was a double bred son of Swinson’s Carolina Rose. Red Ike wes owned by Vernon Whitley and was a belly brother to Cottingham’s Boomer and Cottingham’s Hatchi, two very game dogs. With a litter on the ground Champion Lady Stone is due to fight one more time and then to a life retirement. A bitch was winning while Stone was having those puppies, her name was Presely’s Champion CC and was reputed as to be the next contender for double Grand Champion Tornado. She never made it as Champion Ladystone took her out in a classic, but one sided battle. CC’s conditioning took her to her limit when she took the count against Champion Ladystone at 1:44 making Champion Ladystone
a four time winner. Butch Fox was on his way to becoming one of the best breeders around and it is a shame his life was robbed by cancer. Roots Rockin Kennels has definitely benefited!