In memory of Howard Heinzl 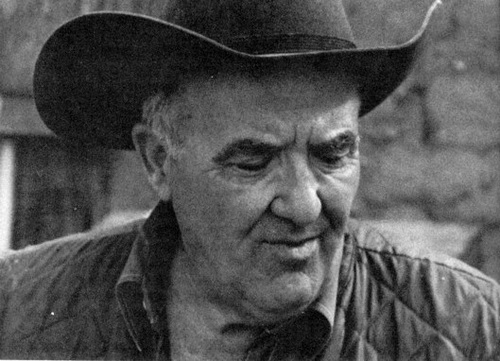 Howard Heinzl, was born in Chicago, April 30, 1914. He was raised on the south side, where games of sand lot football filled his days. There were no referees around to blow the whistle every time there was a little “piling on” or someone received a good kick in the nose, and every game ended in a fight! Sure it was a little rough, but was considered a lot of fun at the time.
In Chicago, in 1923 at the age of nine, came Howard’s first introduction to the Pit Bull.

As he was running around the neighbourhood with an Airedale at his heels, “some old guy’s Pit Bull sacked him out.” Back in those days around the yards of Chicago there was “Red” Considine, The Farmer Brothers, and Rip Ryan, and the Pit Bull was a very popular dog. His first dog was given to him by a man in the neighbourhood. It was a brindle bitch that he named June. Her breeding was not known as a lot of those guys never kept their papers up. They could tell you how they were bred from memory but preferred to keep their pedigrees closely guarded and didn’t put them down in black & white. Howard can recall the many hours he spent travelling “all the way across town” just to weigh and walk the dogs of Rip Ryan. Howard moved to Arizona in 1939 taking with him two pure Colby bitches, Penny & Pooch, and a bitch named Monkey. She was a lemon and white dog in colour and was a line bred dog by Bruce’s “Jerry” out of one of his daughters. Howard remembers, “nobody had any dogs out here then.

Later Wiz Hubbard got a few dogs, and it so happened that he had the old Feely family bred dogs too.” Howard’s breeding of the dogs became his hobby where “the only profits are scooped up twice a day”. A natural gift with the paper and pen made him a close friend to many dog men. After writing to Earl Tudor for quite a long time, Howard’s first visit to meet him was in 1942 when he went back east to buy a new truck. This meeting resulted in a fast friendship. Howard states, “Earl was the best dog man that ever lived when he was in the fight game. He fought more dogs in one year than Armitage did in his entire career. People talk about me sending him these “Arizona bred dogs”, but he owned the father to Bruce’s Jerry who sired all the Arizona dogs and is the key dog in all of these pedigrees.” That was Tudor’s Turk. His close association with John P. Colby culminated when he spent two weeks with him in 1936. Howard once told that “with Colby living in a blue law state, it made it hard to hold many fights, as they had to keep them quiet. He had to fight privately with little publicity. Most people think that he just bred and sold his dogs, but he rolled his dogs harder than most people fought theirs, Colby was quite a sportsman.” Howard bred a white bitch named Dutchess who he says was one of his best. She was out of Patsy, the litter sister to Bambi. Old Peter he considers his best stud dog, Pete was Colby’s old house dog and a litter brother to Neblett’s Congo. He was the sire of Heinzl’s Musty among others. Besides word of mouth, which is often inaccurate, there were old publications that were a treasure trove of knowledge. Howard’s dogs were always there and shining as those “Arizona Aces”. You could tell by what was written and said about him and those dogs, that pride was ever present in his breeding program. Back in the sixties, Earl Tudor had written this letter printed in an old magazine. “I have noticed more talk on breeding’s lately and they are talking a lot of Colby. Well I think John P. Colby bred more good ones than any man, but just who has the old strain now? I have had them all, and will say that his dogs were the best. Now there is a man doing about as well as Colby. That is no other than Heinzl from Arizona. I had about run out of dogs, but he took pity on me and let me have the old Dibo dog.

Now I have nothing on my yard but Dibo dogs” Earl was a legend himself and never gave any one more credit than was due. Many in those days said that Howard and Earl were a team to be reckoned with. It was the things like this, which kept me interested in the Heinzl dogs and their genetic back ground. Howard was a walking encyclopaedia of those great dogs of his times and it is sad but much of the history of some of the best dogs of the day has been lost except for a few letters and memories of the folks who knew Howard. Howard’s fantastic memory for the pedigrees of his dogs was only surpassed by their performance. He has placed hundreds of dogs into the hands of those who would do them justice without a dime changing hands. Many winners of top competition have emerged from all parts of the country. A Heinzl dog generally possessed superior body conformation and had great wrestling ability. Howard was also renown as a puppy feeder and made a carefully prepared diet, taking two hours to prepare, in his adobe tack room outside the house, while watching a TV talk show.

Howard was also renowned as a horseman. Howard Heinzl died at his home on the 28th of October, 1989. His dedication and contribution to this great breed and to the fanciers will be remembered with honour within the history of the apbt.