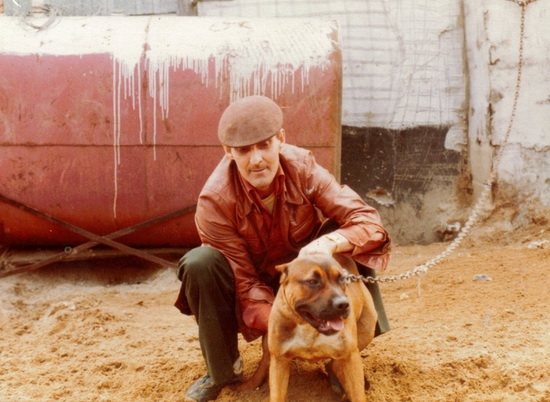 Andre Giroux was a French Canadian who showed Americans that we did not have the monopoly on game bred American Bull Terriers. He is kown as, and definitly was, a top handler, conditioner, and match maker. I feel that his greatest talent was the ability to know which dogs to use for breeding and how to most effectively cross them. He was similar to one of his peers, Maurice Carver, in the respect of producing some of the best American Gamedogs of his time, although Andre lived in Montreal, Canada his entire life. Andre found good dogs where he could, was extremely selective on individuals, but he never became overly focused on one bloodline.

Andre culed or lost testing what most dogmen would have used for a foundation. He owned some of the best, then defeated the rest. While I was still a novice, Andre versed me on how in order to be successful in the dog game that I must learn to keep my heart in my wallet. He versed me on other ideologies regarding the dog game during our many conversations about the breeding, schooling, and training of American Gamedogs, and as to the importance of tending to a dog’s mental well being.

Those bits of advice still carry the same impact as I continue to learn as I go along. The reason that most of his lineage has not continued as most had expected is that many people were mating a pair solely because the name Giroux appeared on the pedigree. Giroux was clever enough not to limit his focus on an ego tunnel, but instead on a realistic objective promoting world wide success amid one of the most enigmatic of sports. Such is a practice that Andre almost never allowed himself to slip into, but one of his instincts did directly backfire on a large scale. The exception was when Andre stopped a brother to Brousseau’s Ch.Ben named Gunner Jr., which was sired by Ch.GunnerROM, and out of Giroux’ Bonnie in a roll while not fully matured but matched him anyway because of his punishing mouth.

Ch.Gunner Jr. won 4 and then was used for stud by many Canadian enthusiasts only to find that he was throwing mostly hard mouthed curs. Gunner Jr. was the dog Andre rolled against his recently purchased aging, retired stud from Patrick, GrCh.Hank. After 20 minutes with Jr., Hank was for sale again and was fortunately purchased by Captain America to be used with much success, just as the Californians were enjoying with the Hank blood through Ch.Little BootsROM and GrCh.Double Trouble. Captain America reached the pinnacle of his breeding program when a son of Hanks named Sir Douglas was put over his Alexis bitch, resulting with Captain America’s GrCh.King Arther that won his final outing as game as the game ones come by winning a war over PSK of NY’s Assassin at 41.5lbs.

Danny “Tattoo” Powell was a protege of Giroux and he seemed to be the only man beside of Alan Waldman, Louis Vinagro, James Crenshaw and Camp who knew how to successfully continue to propagate the Giroux lineage by keeping a mixture of the old Trahan’s Ch.Rascal and Carver’s Black Widow blood through Ch.Gunner over the Tudor stock through either Maloney’s Davis or GrCh.Hank. Danny Powell purchased one of the best sons of Giroux’ Trip, named Ch.Rocky that was a dog winning 2 mathces in one night, back to back, though the 2nd was not counted as a legitimate win. The other Ace Tattoo aquiredfrom Giroux’ wife, Lise, was Ch. Our Gal Sunday, one of the hardest bitches of modern times as she won all of her matches while never passing the 21 minute mark.

Andre phoned me a few times over the years to fill me in on the progress of his dogs and to ask about mine. Once was when Andre unfolded a story about how the old Bear dog which he purchased from Joe Orday came up missing. Andre told me that he found out who had stolen his old stud, and took a drive to see if what he had heard was true. After looking in the man’s backyard he walked to the front door and politely knocked. As the man opened the door asking “Yeah, what do you want?” Andre answered with 3 spent .38 caliber cartridges. He then calmly walked into the backyard again to get his dog, and went back home. Serious charges were pending an investigation, but Andre justly walked away from that mess with out doing any time.

Although Andre lived in the city, in an apartment building with virtually no yard to speak of, he never had a dog stoeln from him gain. In fact when people moved into his apartment building, he would farm out a pup to them as he had with his other tenants so they could raise it for him. Imagine if that man owned acreage. We may still be reading and talking of his dogs today.