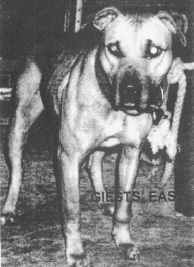 Easy’s story for me began back in the summer of 1984 while browsing through the August 1982 issue of the Pit Bull Gazette. On page thirty-seven a breeder named Kent Reid had two litters of pups advertised for sale. For some reason the pedigree of the “Pups Soon” caught my eye. I guess what caught my eye, right then and there, and made me decide that I had to have one of these pups was two of the dogs in particular in these pup’s lineage, Greenwood’s CH Mountain Boy and his littermate sister Greenwood’s Holiday Hanna. Both of these fine Bulldogs were littermates to both O. Stevens’ CH Homer ROM and Kuemmerling’s CH Freddie. Maybe not an especially remarkable looking breeding at first glance to most Dogmen, but I for one saw some very promising possibilities. You see, I had since made my mind up that I was determined to base my yard on the CH Homer line of dogs. I’d been trying unsuccessfully for some time to get something from it on the East Coast. In my mind getting something good from the Mid West breeding was every bit as good, and I’m glad to say that’s exactly how things turned out. This was a rather unique breeding to me crossing a good, inbred Greenwood bitch, Reid’s Sugar Babe, with a good and almost pure Maloney dog, Maloney’s Macho. Upon talking to Mr. Reid on the phone he informed me that he had mistakenly supplied The Gazette with the wrong pedigree for this breeding and that Macho, not Mongo, was the actual sire of the Sugar Babe litter.

I in turn told Kent that I still wanted anything from this breeding that he had left. It seems that he did have a 2 year old bitch left that he had kept for himself. He said he called her Easy and that as he put it, she was an average dog, and nothing to be ashamed of, still young and just hadn’t come into herself yet. I rolled Easy a couple times a few months after I got her with some other dogs from my yard and found Kent’s appraisal of her to be pretty much correct at that time. As time went on though I began to value her, not so much for her bloodline, but for the quality young bitch she was turning out to be. Pat Patrick, as usual, had the best of the Maloney blood at the time. I’m proud to say that it wasn’t until a few years after the Macho strain started showing so well through many of the good, hardbiting and game dogs that came from Easy that Pat started breeding to and advertising dogs for sale from the Macho line. Anyway, Kent and I agreed on a price and he sent her to me in September of 1984. Easy seemed to have a stable, intelligent and trustworthy enough disposition in regards to my wife and four year old son, even from the very start. Every now and then however that crazy Maloney blood I’d been warned about would come through enough to remind me to use my head around her and not to put my trust and
confidence in her ahead of my good sense. We had a real “best buddy” relationship between us, yet there were those times when I’d be down on my knees petting her and then all of a sudden she’d just start vibrating in my hands. It was at these times that you’d realize your face might be a little too close to hers! No she never bit myself or any member of my family, though she would really let anyone else on the yard know in a very aggressive way that they are not welcomed to be near her, let alone to touch her. In all the years since Easy I don’t think I’ve enjoyed the dog/man relationship with any other dog more than I did with her. She turned out to be one of those dogs that just give a man a feeling of pride just knowing he owns her. Kent had told me that if I bred her and wanted to send him anything out of her that he’d appreciate it, as long as it wasn’t a Patrick or Maloney dog. He said he had seen too many of those “crazy and uncontrollable dogs” bite and he didn’t trust them in regards to people in particular. At this time I’d already decided on two very definite breedings for Easy, even before she had arrived on my yard. My first choice was to use O. Stevens’ GR CH Virgil ROM and my second was a very hot, young pit dog called Waltman’s Buck, later known as STP’s GR CH Buck ROM. O. Stevens owned Virgil at the time and had him up for stud in the November/December 1983 issue of the SDJ for $500.00, along with Bryan’s GR CH Snake Jr. for $350.00. Upon speaking with Oscar I was told that Virgil was sterile at that time due to steroids and that he was being given hormone shots to help build his sperm count up. It wasn’t until Oscar had sold Virgil to Claudio that the dog was again able to produce and I finally got to make my dream breeding.

Out of this litter came Geist’s Becky who later became known as Rocketman’s CH Becky. The Rocketman was brand new in the game at that time but Becky beat very good dogs from both Captain
America and STP Kennels for him. Later STP bought her from Rocketman. Also from that litter came Geist’s Lil Abner. A friend of Oscars, T. Hollifield, schooled Abner and had at least two Champions turn him down on him because of the dog’s hard mouth. After Abner had won his first easily under the name of Little Red it was very hard to get him matched again. Maybe a little overconfident his owner talked about going into either The Rebel’s Sampson dog or Octavio’s GR CH Dutch Boy for his second. It was set up with Dutch Boy in his own back yard in Texas. Abner lost his second quitting to a great dog with Octavio reportedly still telling Tony that Abner had been Dutch Boy’s best opponent. Dutch Boy went on to lose to Rebel’s Sampson, one truly bad little dog. Another from that litter went to Bill Bonner while another went to Claudio. The late Kenny Allen bought other dogs from that breeding, Geist’s Virgilson, as well as Easy from me. I was in dire financial straights at that time, otherwise, neither one of them would have left my yard. Virgilson was a big, rough, hardmouthed dog that won his first for Kenny over the reported 6X Winner Aaron’s Grey Dog easily. From all reports Virgilson had put the other dog down quickly and was trying to crush him into the ground. Virgilson lost his second in a little over two hours. Those who had kept track of his keep told me that, in their opinion, extensive overtraining had literally stolen his mouth from him and that he couldn’t seem to “break an egg”. Though he did lose one he did it dragging himself across the pit on his belly, proving his deep gameness to all that were present. From that litter I kept Geist’s Bad Ear and Honey. They were later owned by P.M.K. in Germany. I had bred Bad Ear to Larry Miller’s/Mountain Man’s Leon dog and that produced Klaus’ CH Virgie 4X Winner. Honey had been bred to P&P Kennels’ Johnny Walker dog to produce the devastating Whiskey bitch. Whiskey won her first easily for STP over a good 2X Winner, crushing this bitch’s shoulder and stopping her in :14. Before STP sent her to the Orient, where she won one or two more and even produced some good offspring, Whiskey was bred to GR CH Buck ROM to produce P.M.K.’s (STP’s) Sambuca 1X Winner 1X Game Loser. When P.M.K. bred Sambuca back to Honey it produced P.M.K.’s Bullet 2X Winner and his littermate sister P.M.K.’s Virgie. Two of the other littermates were poisoned and killed. The last breeding I made with Easy was to a son of CH Homer called Old Charlie, a.k.a.-Domino. Even though Charlie was a cold dog this breeding produced Geist’s John Henry who was later campaigned as O. Stevens’ CH Cholly Boy, a great dog that won over the best from both STP and Jessie Rod’s. There were two bitches also from that Old Charlie breeding; one was Geist’s Calamity, currently known as O. Stevens’ Ramona ROM. The other is a good little bitch called Geist’s Ms. Rage who was later owned by STP and then by P.M.K. Kennels that is a good producer herself. Easy was shot and killed after biting one of the late Kenny Allen’s yard boys. A real shame considering the additional great pit dogs she could have produced if she would have lived.