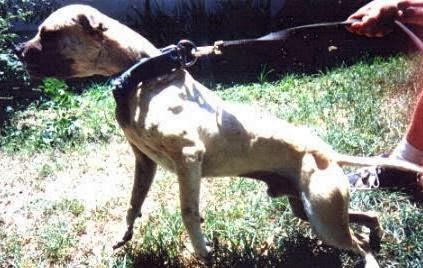 Shep’s first match was into Keith’s Blackie at 37 pounds. It only lasted :16 as Shep went right through his opponent. Number two was into Mark’s Billy a 1X winner at 39 pounds and the result was the same as the first match; Shep won at :26 as Shep got busy in the stifles from the jump. After winning these two it was time to go after some real competition, it was to be Ozark Kennel’s CH Maxx at 41 pounds. CH Maxx was very smart and a good wrestler, he held Shep out for the first 30 minutes but by the forty minute mark Shep was where he wanted to be as he was working the front-end good. At :55 Ozark picked up a game CH Maxx. Now Shep is known as CH Shep and the Kansas Tin Man comes along with his famous son of CH Banjo, John Roach & Coy Dickerson’s G-String. G-String had won two at 38 pounds and was said to be a great dog. The show was even for the first twenty minutes, by the 30 minute mark CH Shep took control and curred G-String out at :54. After this show, The Schoolteacher sold Shep to Sonny Hudson for some serious bucks! Now Shep is known as Midwest Express’ CH Shep. Sonny had Shep hooked three different times but collected forfeits on all three cards. Shep was then retired after collecting his third forfeit from Cricket’s CH Black Jack.

One year later we heard about Gator Boy’s CH Mickey. No one wanted any part of him, so Sonny decided to let CH Shep step up to the plate. Figuring what the hell, Shep has beaten four good ones already going from 37 to 41 pounds. We had a great chance against this dog that the whole world feared, even though Shep was a bit past his prime. Well, CH Mickey died in a kennel accident two weeks before the show; we were ready with Shep but didn’t have a match. Dead Serious was contacted and being the great sports they are, they took the weight on a four-week notice. DSK was using a dog from Robert Kirkland. Normally Shep was the destroyer, but he had to adjust to this opponent and go on defense. Kirkland was handling and his dog was very fast and young. He made Shep dig deep to hold off the dog and find a way to win. Shep wore down his opponent and then mounted his offense and put the challenger away. Shep has proven that he was the best 40 pound dog of his time and is now retired to stud. Many challenges will come, but when available very few would chance their dog against old Shep who dominated several weight classes. GR CH Shep showed that he had incredible power and ability. He also showed that he had the smarts, endurance and heart to beat the best when he was past his prime. Surprisingly, GR CH Shep is a tight bred from a three way cross off CH Bad Billy ROM. Midwest Express