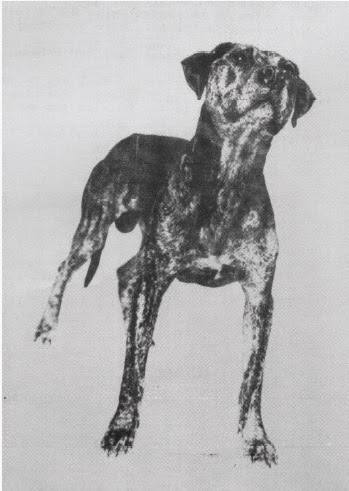 When you are a beginner in the dog game every dog you hear about winning a few matches is considered a great dog, especially if the dog is from the bloodline of your choice. When I was just starting out in the game a few years ago, I was criticized for thinking this way about a dog called Melonhead. Melonhead had won three matches, but in my mind he was not getting the respect he deserved. You see, from the people I spoke to, Melon was a very good “hold out” artist. His critics claimed that the first time he gets in trouble he will quit. Well, two years later, and after a total of nine wins GR CH Melonhead has indeed silenced his critics. His first fight was against Lawrence’s Rocky. Melon won this fight easily by curring Rocky out in the short time of :25. Rocky was a cur and with his defeat Melon is awarded his first contract victory.

His second fight was a little better of a contest with the match being made with Shankbone. Shank is one tough competitor and Melonhead had a job ahead of him. Shankbone brought a dog named Maxwell that was truly game. He was picked up at 1:00 and made a good courtesy scratch. The owners of Hathaway’s Uzi were contacted for Melonhead’s third show. Melon went right through him and made it look easy when they picked up at 1:15 making Melonhead a 3X Winner and a Champion. Match four was against Lewis’ Python, this dog quit cold in :39. Match five was against the North Central Texas Boys’ Goldie and went much the same as his fourth, as Goldie quit in :23.

His sixth match was against the highly regarded 2X Winner Nanny’s Hank. Hank was a son of Little Boots and had beaten Melonhead’s brother, CH Tiny Tim. In the minds of many Melonhead was not the betting favorite to win. Hank was a hard biter and loved the throat. I lived about a city block from Hank and his owner, so I did a lot of hand walking trying to give Hank a little edge. To make a long story short, Hank stood the line at :51 making Melonhead a 6X Winner. This was the turning point regarding Melonhead’s reputation. Melonhead overwhelmingly proved he could bite hard and could easily beat a highly regarded dog. Now Melonhead was starting to get the respect he deserved. His seventh win was against Ken and The A-Team’s Higgins. Higgins quit at 1:30 and with this win he established himself as one of the best 45 pound dogs in the country.When a dog wins seven matches he starts to draw big guns and the next two matches proved that. Match number eight was into Buford Adams’ Dooley who was a 2X Winner that had won Gamest In Show in Mississippi back in the fall of the year. It is too bad that they had to meet because Dooley proved to be a DeadGame Dog. GR CH Melonhead beat Buford’s Dooley in 2:40 showing absolute gameness and ability. My hat is off to both owners on the matching of these two Aces.

His ninth win was into the highly regarded M. M. & M.’s CH Panthol. The M. M. & M.’s, also known as the Masons, are a powerful combine from the Midwest and had not lost in quite some time. The Panthol
dog is a grandson of CH Jeep and was expected by all to win. GR CH Melonhead was declared the winner in 1:02 defeating the Masons and breaking a long streak of wins by this combine. Melonhead was off of Hammonds’ Pig, a 2X Winner with four hours on him. Pig is a brother to Hayward’s CH Jack and Hammonds’ J.M., J.M. is the sire of Steve’s 6X Winner Whino. Whino’s most famous match was against Winchester Kennels’ CH Chaka. Chaka was the dog that Winchester Kennels beat Boyles’ CH Bolt Action with. When Whino beat Chaka many were amazed.

This is definitely a good producing family of dogs. Melonhead’s mother is a bitch that they do not know how she is bred. The first puppies off of GR CH Melonhead are just now showing and they have a male and female that are both 1X Winners. A breeding was just made to Hammonds’ Pig hope they are ½ as good of a dog as GR Ch Melonhead or his brother, CH Tiny Tim. I would like to congratulate the people behind this great dog, for without their efforts there never would have been the dog we all know as GR CH Melonhead.