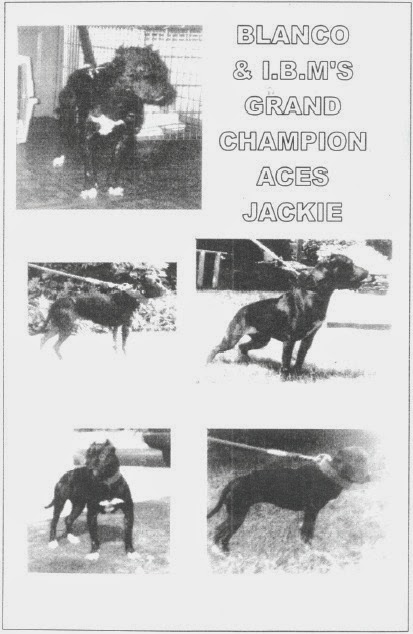 Aces Jackie, or Boots as my wife called her, was born up North on the yard of Dawnrest Kennels on August 2nd 1995. Aces Jackie was sired by Rumble, a game and talented stud who is tight Mountain Man’s CH Homer blood, and out of the very rough Pigskin who is tight Cowboy/CH Jeep; both sire and dam have a little GR CH Joey blood for a boost in there. Boots was picked out by Angel Martinez, a friend of mine, who I brought up to Dawnrest because he wanted to buy a pup. Angel raised her until the age of 5 months old when he said he no longer wanted the fiery little bitch that kept shaking his males ball sack. He also didn’t like the way she looked as we both agreed she was the ugliest little bitch around. I paid him four $100.00 payments on her and she was mine. I let her share a kennel with my other 7 month old male and they were fine for a couple of months. Until one day when the wife and I were away at a function and Boots decided that she doesn’t want Damien sharing the kennel anymore and breaks his leg. I got scared since Damien had 20 pounds on her and he tossed her around until she takes his bottom end out. We separated them after about ten or fifteen minutes of what we saw upon our return home and took Damien out. When I let Boots go she rockets into the fence. I tell myself, well if she wants it I’ll give it to her in a few weeks. So that’s what I did. We tried to put a Colby/Bad Billy/Boomerang cross on her but they didn’t go. So one of the guys says his Flo will have that bitch for lunch. Well, they started but Boots picked her teeth with Flo so we put a bigger dog on her after that. That was bump number two and it lasted twenty-seven minutes. I healed her up and a month later we go up North where she came from and give her ten with a Deadwood bitch. She scratched on three and we had to get her other leg stitched back on. Four months later, I gave her fifteen with my rough Bad Billy bitch and they make a nice mess but Boots was giving up 10 pounds and was still coming to the top.