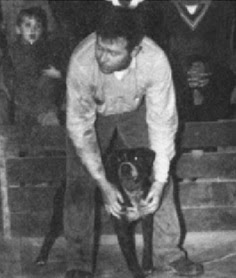 “On December 6th, 1959, a match was scheduled to take place “a couple of hours drive out of New York City”, at about 2 in the afternoon. The Editor, arriving a little late, set out in pursuit of a couple of cars, whose drivers knew the way. After a seemingly chase all over Upper New York State, during which time we woke up Rip Van Winkle, driving through the country made famous by Washington Irving, we arrived at a farm house at the end of the road. Here, the boys from the New England area had gathered, and a pit was set up in a garage.Jack Kelly, using his Brandy dog, a heavy built brindle with natural ears, said to be from Gene Fulkerson’s Dixie and sired by Jersey Joe.

Joe Blanchard, using a black brindle, Kayo, said to be a pure Colby dog. The dogs were weighed in, within a pound of each other, 46 1/2 and 47 1/2 pounds.
The Kayo dog, also natural ears, was more on the racy type, and probably a little faster on the feet, and a little quicker on the grab, but the “Brandy” dog was a very rough wres­tling dog. For the first twenty minutes, it was any­body’s guess, as to the outcome. First one dog and then the other would be top dog. Both dogs worked the ears and throat well. Both dogs guarded their legs from their attacker. Mostly head, ear and throat holds throughout the match. Finally, the fast foot-work on the part of the Colby dog be­gan to tell on the slower moving, but aggres­sive Brandy, and at about 23 minutes, Brandy made a turn, and was called on to make a scratch. When released at the command of the timekeeper, Frank Bender, Brandy was count­ed out, standing in his corner. Joe Blanchard’s Kayo made a good courtesy scratch. Kayo the winner in 24 minutes. The Brandy dog was saved from the “Cuban Treatment”, when he was adopted by one of the spectators. Regardless of the outcome, Brandy will make a rough contender for the ordinary dog should one be unfortunate enough to cross his path. In addition to Jack Kelly and his brother Vic, the New York area was represented by Robert Neaderland, an old hand with the game fowl, but a new face at pit-side as far as the dogs are concerned. From the general New England area, there was Jim Lyman and Ed Dooley, Al Landry and Frank McNamara. A few others whose names the Editor does not recall at the moment. About 25 in all. Both dogs in excellent condi­tion. Pete Sparks, referee.”
The above report is quoted from the De­cember 1959 issue of Your Friend & Mine.

KAYO was still the laid back dog I remem­bered, and he took to his work very well. About 10 days before the show, John Shivar flew up to New York for a visit. John worked for East­ern Airlines, and could fly anywhere Eastern flew for One Dollar, providing they had some seats available on that flight. John helped me work KAYO for a couple of days, and then sug­gested that he take the dog back to Jackson­ville, finish up the keep, and that would help the dog to become acclimated to the change in temperature, and altitude between New York and the sunny South. I thought that was a good idea, and KAYO was of to Jacksonville with John.

The matches were scheduled for Saturday night, and I arrived early Saturday morning. John and KAYO were already there. I found Howard out at the site where he was talk­ing to H.Q. Kennedy. I put up the rest of the bet, and H.Q. Kennedy said to me that KAYO looked real good. Just then Howard asked me if I wanted to bet any more on KAYO, and I told him yes, another $500.00. Kennedy im­mediately said that he would take the bet. I said, “Wait a minute, I thought you said KAYO looked good”. Kennedy replied, something to the effect, that he did think KAYO looked great, but he liked the other dog better.

Come time to go to the show. I had about two drinks more than I should have had, and I was beginning to let the conversation, ear­lier in the day, bother me. My brother Vic, who also had bet on KAYO, along with John Shivar, suggested that I let John handle KAYO in the match. I wasn’t drunk enough not to think that was a good idea. KAYO won easily in less than an hour. The following excerpt of how the fight went down is from the April/ May 1961 issue of Your Friend & Mine. Quote as follows: “Second contest was between John Shi­var of Florida and Tom (Colie) Fisher of North Carolina. Males at 46 lbs., top, and both dogs on the weight. Shivar is using a black brindle, rangy built dog furnished by the Kelly brothers, – a Colby bloodline, bred by Louis Colby. This is the dog that won over the Kellys’ and I understand they purchased him after the contest. [This is the Kayo dog, now called Rounder by Shivar – Editor]. Colie is using a red, black nosed dog, a little tighter built dog than the black. A com­bination bloodline, bred by Yates of South Carolina. Each man conditioned and handled his own dog. The black dog was said to be out of Col­by’s Dime and one of his own daughters. This was a lively contest for about twentyfive min­utes, both dogs good wrestlers and pretty fair biters. They were fighting the head mostly with an occasional switch to the legs. The red dog was running out of gas at about twenty five minutes and soon was out of the fight also. He began snapping and the black dog turned from the snapping, but ran his scratch straight and true, and was the winner at 47 minutes. This black Colby dog is a good steady fighter and this was not a fair trial for him to show all his mettle. No doubt we will see him in action later.

Your scribe did not keep records on the Refereeing, so will just mention that the job was alternated between Mike Ferris, John Ed­wards and H.Q. Kennedy. Pete Harr ell had a copy of the Rules which he displayed promi­nently and continuously, all in good fun but it must be noted here that the officiating was goad. In fact there has been no serious objections to any officiating at this pit. Some little mistakes have been made in interpreting some of the various rules but never a mistake that affected the outcome of a contest. As it is now, we have several fanciers who know all the rules and are well qualified to referee any contest under any of the rules currently in use.” I got back to New York, and I owed Joe Blanchard $400.00, or I could send KAYO back to him. I had two dogs, approximately the same size. I just couldn’t make up my mind, and Joe was getting a little antsy. Finally, after weeks of pondering, Joe made up my mind for me. He suggested that I send KAYO back to him, and he in turn would sell the dog to Jimmy Lyman, who would then match KAYO into me and BOB TAIL BUDDY for $2500.00. I couldn’t resist, I had lost previously to JIMMY, and was anxious to even the score. And, while both dogs were first class dog, I figured that at 48 lbs, BUDDY would be the bigger dog. I also was of the opinion that BUDDY had a much better mouth than KAYO. Jimmy and I were both about a few days into our keeps when JIMMY called me and called of the match. KAYO had slipped his collar, run out in the road, and got killed when he was run over by a truck.