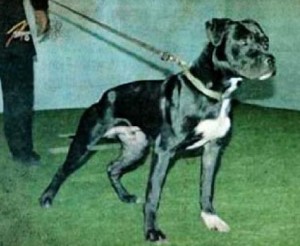 Whitefoot was a three time winner at 43 to 44 lbs, out of Gr Ch Midnight and Indian Missy. He had one white foot so naturally I named him Whitefoot. His most famous and best fight came against Ozzie Stevens Ch Cholly Boy. At the time, Whitefoot was a 3x winner and Cholly Boy was a 4x winner. After his wins it was very difficult to find a match Twice I thought I had him hooked.

The first time I thought I had it done was against Bert Sorrells and his Ch Bud Light dog. After speaking to
Bert several times and over several weeks he would then not even answer my phone calls. Then after speaking to his wife Joanie on several occasions I realized it was not going to happen.

Next was Chan’s Ch Floyd at 45 lbs. I agreed to go up hill at 45 lbs but when it was time to put up, I was alone again. I had heard that Ozzie Stevens had his Ch Cholly Boy open at 46lbs. It only took one phone call and it was done. My 3x winner vs. Ozzie’s 4x winner to take place in the Mid West. Again I knew this was the real deal and I had to work for eight weeks. Starting with hand walking for 15 miles a day. Back then I had a 14 story building under construction. We walked all 14 stories 10 times everyday. Finally peaking out with 2 hours on the slat mill. This took 5 to 6 hours ev­eryday for 8 weeks.

Finally our date came. Whitefoot was perfect and I had calves of steel. Monies were put up, the dogs were

weighed and washed and then released. I immediately knew this was going to be a tough one. Ch Cholly Boy was a much bigger framed dog. They both weighed the same but I had the smaller dog. Ch Cholly Boy came out and hit Whitefoot in the throat and stayed there 20 to 30 minutes. It looked bad for White-foot. All of a sudden Whitefoot got him out of the throat and started to work Cholly’s chest and shoulders.

To make a long story short these two dogs swapped holds for the next two hours. I started to believe we were going to pull it off but then Ch Cholly would turn it around and I would think we were going to lose. Whitefoot would then come back again but at two and a half hours I could see Cholly was getting the best of Whitefoot. To his credit Whitefoot made some very game scratches but he could not make his last at over 3 hours. Ch Cholly to his credit made a very game courtesy scratch.

Not many people know about this fight but I would say it was one of the best. We both lost two great dogs that day. Regard­less of all the BS people talk, though I lost, I have to give Ozzie Stevens credit for not only breeding such a great animal but also for bringing him in top condition. My hat’s off to him. He is what I consider Top Flight competition.

I would like to give my respect and ad­miration to both these gentlemen for play­ing the game as it should be played. God Bless and Best Wishes to them and all the other true players out there.