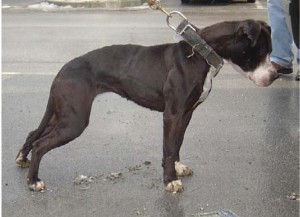 In the early Fall of 1997 I bred my CH AZRA R.O.M. to Bijeljina Boys’ CH BELI, who was part of one of the greatest litters ever born here. He was a littermate brother to Bijeljina Boys’ GR CH CRNOOKI 5W, CH BELA 3W, SARENKO 2W and SIVI 1D R.O.M. AZRA was also part of another real successful litters born here. Unfortunately, the breed­ing was unsuccessful so I called Bijeljina Boys and said that I don’t want my money back, instead I would just come again with CH AZRA R.O.M. on her next heat. They agreed so when that time came I did it. But this time I choose AZRA to be bred to GR CH CRNOOKI. The breeding was a total outcross, but I never looked too much at pedigrees, I looked at performance. I always did breedings looking for really good pit performer, especially if they were from an exceptionally good litter or from a proven bloodline. This time I had better luck and a litter of 8 pups was born on 13 June 1998 in my yard. I kept 4 pups for myself but a black female with white markings was my pick of the litter. I named her BLOODY MARY.

MARY she was hot and fully started at 3 months, she had perfect motor skills and she was an extremely noisy bitch. She was hyperactive and could run and bark whole day. MARY’s schooling started early and she showed to be a very good pick. She showed super air, great talent, a hard mouth and speed. During her rolls opponents never lasted long. She was way too fast for them. Usually after high pres­sure from MARY, they broke down, before the 20 min mark. When she was 20 months old I tested her with 4 females. Yes, you read it right, with 4 females. Each for 10 min against MARY. She was better against the first 2 and even with last 2 opponents. MARY wasn’t on her back even once. She was ready to be matched.

At that time Kaman Kennels from Italy was very interested in BLOODY MARY, they saw her in one of her rolls and wanted to buy her. That was not an option since I had big plans for MARY’s match career, plus as a brood bitch. But they were persistent and waited a couple of months until I needed some cash. Kaman arrived to my house and I said I would not sell her before I get pups out of her. He said, “No problem, you can have her puppies, but I will match her”. He offered a really big amount of money for her on top of that. So BLOODY MARY was sold.

Kaman Kennels contracted her as soon as he got back home. Her 1st opponent was Scream Kennels MEGY, a daughter of Lakeman’s CH GUS x Nenad’s TINA 2W 1L (belly sister to my CH AZRA R.O.M.). The agreed weight was 16.4 kg (36 lbs). It was even early, but then MARY pulled ahead hard and MEGY was picked up at 22 min. Only few months after BLOODY MARY had her 2nd match into Sacoci Kennels’ LAMETTA, who was out of DOC x MARGO. The match was set at 17 kg (37.4 lbs) and LAMETTA didn’t had any chance. BLOODY MARY barnstormed her from the start, LAMETTA quit on herfirst scratch at 27 min and MARY was a 2W. After the match Kaman Kennels returned BLOODY MARY to my yard as it was agreed, because I wanted to breed her to my RIOS who was also a 2W at that time. The breeding was not successful and I returned MARY back to be matched again. One day I got a call from Brian from Sud America Kennels and he said that he have just purchased BLOODY MARY. I was surprised and asked what happened. He said that Kaman Kennels had some problems with the law and got out of dogs. Brian owned two littermates of BLOODY MARY al­ready. A brood bitch named VICKY and a deep game male CRNOOKI JR. He claimed that CRNOOKI JR. was the gamest dog he have ever seen. Brian contracted MARY for her Championship match. He traveled all the way to South of Italy to meet Corrado’s NINA 1W. Corrado was one of the oldtimers there and NINA was imported from the USA, from the popular GR. CH. YELLOW ROM bloodline. Thematch was contracted at 16.7 kg (36.7 lbs). It was a real war, NINA was rid­ing the head and tried to keep MARY off. She was doing a good job until 15 mins when MARY increased the pace and NINA couldn’t keep up. MARY was stronger and could bite way hard­er. NINA was outclassed fast, with hard chest & shoulder holds. Corrado picked her up at 37 min. NINA ran a deadgame scratch, she died the next day.

BLOODY MARY was a Cham­pion with reputation of hard mouthed bitch.Soon after that Brian ran into

some problems and sold all of his dogs fast, including CH. BLOODY MARY. Her new owner was Spoken Pit from south of Italy. He saw her last show and he wanted to show her again. He contracted her for her 4th against Peppe’s NIKITA 1W who was a sister to Kozina Kennels’ ZIKO JR. Spoken Pit was known as one who already lost lots of matches, he always brought his dogs in bad shape, which he also did with MARY. She was weak and looked very tired. NIKITA was a very good female and she did lots of damage to MARY. She went into the chest and in the back legs. MARY rode the head trying to do something. Finally, NIKITA slowed it down a bit and MARY hit hard in the shoulders, it was payback time. MARY started to kick NIKITA’s ass, both ran 1 game scratch and then NIKITA was picked up at 38 min. She ran one more deep game scratch, but died after. CH. BLOODY MARY was a 4W. After that I called Spoken Pit to buy her back. At first he wasn’t interested, but after couple of weeks he agreed and BLOODY MARY was back in my yard in Croatia again. She was 5 years old then and on her first heat I bred her to my CH. VILI II but she got no pups. So, I started to look for an opponent for her 5th match. My intentions were to find the best opponent possible for her. I called everybody who had a winner at that weight but with no luck. I called Psycho Kennels about CH. SHILA 3W from Serbia, she was sister to Toske’s famous CH. BLACK MUP, but she was full of puppies then. Later I called Mate’s for his GARA 2W again, the same female which was supposed to go into MARY’s sister NIRVANA. We agreed a match ,but believe it or not, GARA died during the keep.

After a long time, I almost gave up my hopes to match her for her GR CH title, but then Hazard Kennels took our challenge. The match was set at 17.5 kg (38.51bs). Since MARY wasn’t so young I wanted not to dry her too much. The date of the match was set on 12 March 2005 and MARY was exactly 6 years and 9 months old then, without 2 big fangs in her mouth. Hazard Kennels had his PEPICA female, she was a 2W and a 2x O.T.C. winner, out of Jedinko’s GIZ­MA. Both females were experienced 4W and we expected a good Show. CH.BLOODY MARY 4W was going for the GR. CH.title while PEPICA 2W, 2x O.T.C. was going for the CH. title. BLOODY MARY was known to be a hardmouthed finisher and PEPI­CA as a hardmouthed face/nose bitch. Both females never had their matches lasting longer than 40 min! BLOODY MARY was in great condition and I was calm. The match started furiously, PEPICA went on the nose/muzzle and MARY went in the chest, there was lot of blood everywhere after few minutes. Both worked fast paced, both knew what to do. PEPICA worked the face & shoulders, MARY was deep into the chest & throat. At 16 min. mark PEPI­CA hit a heavy bleeding artery in thefront leg of MARY. Blood was pumping out 2-3 feet in front of MARY. I was shocked, I couldn’t believe that it was going to happen this way. Right during that time MARY was in the better position, at least her breathing was much better than PEPICA who already was breathing hard. I waited 2 min to see if the blood would stop, but it isn’t and I was forced to pick MARY up at 20 min to stop that blood loss. MARY ran her courtesy scratch like a rocket and we took care of her bleeder. She was ok 5 min after, acting ready to continue, but it was all over 2nd she lost a chance to earn her GR CH title. It was a bad luck that night, but CH BLOODY MARY was still well and alive. If I didn’t stop that match, she probably would have lost too much blood, got weak and die. This way, this tremendous bitch was still with me, with who she be­longed. CH BLOODY MARY was retired at the yard of my friends from Italy where she lived a life of luxury as she deserved it.The final result of an out-crossed litter of of GR. CH. CRNOOKI x CH.AZRA R.O.M. is CH. BLOODY MARY 4W, 1L, NIRVANA 1W and CRNOOKI JR. 1L game. I was right the whole time, believing that winners would produce winners anyway, or at least respectable deep game losers, no matter if they are totally out-crossed with even 6 or 7 different bloodlines in their pedigree.