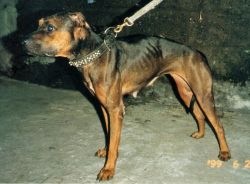 Passed of as a litter out of Wildside’s “HELLRAISER” by some unscrupulous peddlers (you know who you are boys!), Bogie trustingly bought this dog despite rumors about its real breeding. He successfully campaigned Bama at 14 months of age against D.T.’s “MIRIAM” out of Wildside’s (Arce’s) “DR. DEATH” x Wildside’s “BLACK CHERRY”. This win made Bama the first Philippine female winner, despite two weeks of training. She was handled by Jack, the only female handler in the Philippines. Bama was just a replacement for Gerald’s “PINKY”. Eventually the truth of Bama’s real breeding came out. She turned out to be out of Ted P.’s (Pritt’s) “RED BLAZE” (Red Devil) x Allan’s “CH. WICKETT”, a littermate of Underdog’s Miriam. After the match, Bogie gave Bama to Arnold. She is currently a straight 4x winner losing her grand championship match against Mandirigma’s “BETINA”. Her conquests include some of the country’s best female bitches – including two of her aunts. Her matches are as follows:

It was a cold December afternoon when Bogie received a call from then PITDOG Club President, asking if BAMA could substitute for Gerard’s PINKY against his black bitch MIRIAM at 38 lbs. Up to this day, we still don’t know why Bogie accepted the offer. Whether it’s “pakikisama” or just plain old confidence in his dog, we don’t know. The match was due with only 2 weeks preparation. Everybody thought it was suicide as BAMA was only barely 15 mos. old at that time, besides, everybody knew Miriam to be a rough hard biting bitch. R. C., a vet who’s been checking up on Miriam’s conditioning said we won’t stand a chance as Miriam’s at the peak of her condition, and to top it all we’ve only seen Bama rolled for less than a minute. We hurriedly mapped out our conditioning strategy and out of necessity, built the very first “CAT MILL / JENNY” using scraps of metal and wood.A design unlike other cat mills, but has been copied ever since.
Everybody pitched in to condition Bama, and the keep went well. Now, our only wish is that Bama make a good showing worthy of a “bulldog”. Winning was out of the question though.

December 16, 1996. In a highly controversial match, Bama surprised everybody by outclassing the heavily favored Miriam in 18 minutes. Everyone we’re at a loss for words, especially the ones who bought pups out of then Ch. POGI x MIRIAM breeding. This was the very first win for the Southernmen.
Southernmen’s “BAMA” vs. Stupid Allan’s “PUTOK” 39 lbs.

For almost 2 years, Bama was opened and remained unchallenged. Then a progeny of Miriam came out to answer the challenge. The BAMA-PUTOK match was set for 39 lbs. Stupid Allan’s Putok, a red/white, red-nosed bitch out of Gr. Ch. Pogi X Miriam breeding, and is said to be the bitch who will stop Bama.
September 12, 1998. Bama got into the throat and never looked back, when the smoke cleared, it was over in 25 minutes. Southernmen’s “BAMA” vs. Lone Warrior’s “CRICKET” 41 lbs.

December 1998. Bama’s hooked for her championship against her Dam’s littermate; Lone Warrior’s CRICKET at 41 lbs. Bama was now fighting 3 pounds above her normal weight of 38 lbs. The match started with Bama working hard to neutralize the heavier and durable Cricket, instead she found herself on the receiving end, bleeding profusely on the head. By the 20 minute mark, Cricket is running hot and Bama turns up the heat. After 23 min. Cricket stands the line making Ch. Bama the first Philippine champion.

“CH. BAMA” raring to go…
Southernmen’s BAMA vs. Walter’s “REGGIE” 39 lbs.
Ch. Bama was hooked for her 4th on March 14, 1999 against Walter’s REGGIE at 39, a red BOLIO/CHINAMAN from Arce’s breeding. Bama immediately set a blazing pace but Reggie keeps on scratching. At the 25 minute mark, Bama gets in the shoulder and the red starts to falter. After 30 minutes, Reggie stands the line on her 5th.

Southernmen’s BAMA vs. Mandirigma Kennels’ “BETINA” 37 lbs.
The date was September 30, 1999 and Ch. Bama was hooked for 37 lbs. against Teddy’s “BETINA”, a black bitch out of O. Steven’s “STINGER” (“CH. CHOLLY BOY” X “ZERA”). The night before the match, Bama threw up while travelling to the site. To compensate for the lost fluids, Arnold gave her some water and dry feed w/c resulted in Bama weighing 2 lbs. over the agreed weight. A few minutes before the match, Bama was still slightly overweight and no amount of walking can help her shed those pounds off. Arnold, on the other hand was still firm in his decision not to pay the forfeit. After much debate, and 3 suppositories later, a now weakened Bama finally made the weight. 5 minutes into the match and we knew, Bama can’t possibly do any damage, let alone defend herself in that condition. We’ve let her down by not doing our part and we deserve to lose. After more than 25 minutes Bama stood the line. That night, the better bulldog won. Bama lost her bid for the grand championship but she’s still, pound for pound, the best all-around, high ability 39 lb. bitch in her class. A warrior who’ll never be forgotten.
–J.T. (Taken from the old Southernmen Website)