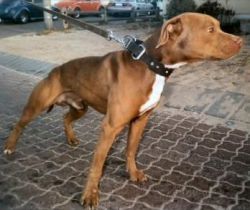 On April 10th 1998, D. Carrols Diamond (Kojak x Princess) bitch dropped a littler of nine pups after being covered by D. Carrols “Junior” (Gr.Ch Buster Brown x Buddah) male.
The majority of the pups were tested but only three were showed.
No.1 was Terry’s Dugan who did well for 1hour & 30min. then stood the line. (He died later)
No. 2 was Boerboy’s Amber who won her first and lost her second dead game. Most probably the highest ability bitch I’ve ever seen.
Then came “Joshua”
“Joshua” first was 2 years of age. The weight was set at 22kg. The opponent was a son of Ch Nero called “Bulla”. On show night the opposing party shows with much more than the allotted number of people and the show is delayed by a full week. This incident throws “Joshua’s” weight a little and a week later he comes on at 21kg. While his opponent come in at 21,5kg. “Bulla” makes “Joshua” look stupid for 15min. “Joshua”(A very frustrated dog). When “Bulla” slips up “Joshua” punishes him for the next 15min. “Bulla” turns. “Bulla” stands the line at 32min. “Joshua” now a 1 X winner.

“Joshua” second was into Trueblood’s “Nicholas” 2 X winner. Weight was set at 20kg. On show night both dogs weigh in at 19,7kg. Both dogs look good and are the same size. “Nicholas” hits a bleeder in the first 5 min. “Joshua” in no major trouble and at 30min it evens out. “Joshua” all the way now that he sized up “Nicholas”. Josh is taking the fight to “Nicholas”. At 1h30min. I tell Trueblood to pick up his dog. “Trueblood” still confidant. “Nicholas” squirts a wet one all over Trueblood” At 1 hr 40min. “Josh” bring “Nic” down with a throat hold and keeps him there for 20min. Dogs were scratched hard all the time until “Nic” stands the line at 2 hr16min. “Joshua” now a 2 X winner.

“Joshua’s” third was into Sandman’s “Devil” a 2X winner. Both dogs going for championship, which makes this a very important match. Weight is set at 19kg. “Josh” weighs in at 18,8kg and “Devil” weighs in at 19,3kg. Both dogs look well conditioned. Dogs are released; “Devil” takes the first hold in “Joshua’s” shoulder. They wrestle for 10min. and then it’s all “Joshua”. He throws “Devil” all over the pit. He damages both stifles and all 4 paws, head, penis, lower jaw and throat. “Sandman” picks up in 45min. “Devils” makes a hard courtesy scratch. (Very game “Boytjie”) Joshua now officially Idlewilds CH “Joshua”