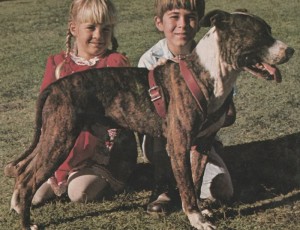 Although I have often been referenced as the authority on Going Light Barney, I must confess that I never even saw Barney in holds. I found it quite fascinating, however that he was one of the most controversial dogs of which I ever knew. I think part of the reason for that fact was Barney’s flamboyant owner, who is still alive as I write this. Although not a bad fellow, he had a way of stirring up the dander of other dog men. Consequently, all of Barney’s accomplishments were always scrutinized with a jaundiced eye. Since I had my picture taken with Barney, a lot of people seem to think that Barney once belonged to me, but such was not the case, although I did own a daughter of his which I bred back to him. That breeding produced George, one of my finest all-time dogs from a pit dog perspective.

Its hard to believe now, but Barney was welped way back in the 60’s, so he is definitely an old timer. He was a product of breeding a daughter of Johnson’s fabulous Goofy dog to a Rascal bitch. That produced Barney’s mother, Penny, and she was nothing to write home about-possibly a cold bitch and a trifle shy. She was bred to Rootberg’s Booger, strictly on the basis of his being a pure Corvino dog. So it is not surprising that not much was expected of the litter, but it produced Barney and several females which were renowned for their gameness, one of them, Going light Babe, winning best in show down south in a losing effort!

Barney had a storied career. He had been farmed out to some guy in the inner city to raise and was rolled from the time he was six months old, something no educated dog man would do. After he killed two dollar George, a highly valued pit dog in a pick up match when he was only a little over a year old, he was reclaimed by his owner, who called himself Larry Light in the pit circuit. He was matched into fast company down in Mississippi against a Carver dog and won handily in about 20 minutes. This was the convention which also featured Boomerang and the immortal Bolio. Bolio won best in show because he won over the dog with the highest reputation, a dog which was thought to be unbeatable.

The controversy comes from the fact that Barney was counted out in his third match in Dallas. Larry swore up and down that he was doped, as the dog didn’t know where he was, and had lost his equilibrium for several hours. Whatever happened, Barney came back to win six in a row against the best the other side could come up with. One match was raided and the dog confiscated. This was before the felony laws, and the dogs were broken out of the pound in which they were held. The match was held, and Barney won in an hour and five minutes. Barney was dyed black and shipped to a preacher in New Mexico. Part of the reason for all of this chicanery was that Larry was suing the animal control people for losing possession of his dog!

Barney’s toughest match was against another ear dog, extremely well thought of, and the match went nearly two hours before Barney prevailed. That was back in the oil crisis days, in which you couldn’t plan a long trip, as you might run out of fuel. Larry and his cohorts loaded up the station wagon with several gallons of gasoline so that they could make the trip there and back without having to worry about fuel. I was in vited to go along, but I was not of mind to travel in that rolling time bomb! Hence, I missed my chance to see a great match. Barney usually had an easy time with his opponents, controlling them with ear holds until the dog was worn down, and then Barney went in for the kill. I think it was the quit in Dallas that made it possible for Larry to go on finding matches for Barney.

After the above mentioned match, a fellow named Jobe, who put out a pit dog magazine, did a cover story on Barney. He had been there at the match, and he dubbed Barney a Grand Champion. That was the first time I had ever seen the term used. Now, he would not be eligible for the title because of the loss in his second match. Mitigating circumstances don’t count, and besides, Larry was never able to prove anything.

Barney was known more for ability than gameness, but he was game enough to win, and the loss came under suspicious circumstances. Barney was an unusual Bulldog in that he had an aloof personality, in direct contradistinction to most bulldogs. He won Larry’s wife over because he would sit up and do tricks on the chain or in the kennel run, but once he was taken out, his demeanor changed completely. He had achieved his goal, so the claim was gone, and he simply was off to do what he wanted. Larry, who was a real-estate speculator who owned half the land in San Diego county, loved the deviousness of the dog. He was also delighted that his wife, who abhorred the pit dog game, was Barney’s stoutest ally-although she certainly never went to a match.

Barney was never open to stud, and he was never bred much, as Larry seemed to concentrate his breeding program on breeding dogs that were down from Penny and in breeding Barney’s sisters, in particular Babe. Larry was one of those guys who kept track of litters by naming all the pups with the same letter, but somehow one in this litter got named Scarlet. Although a fine pit dog, she escaped Larry’s ownership. Another game sister of Barney was Belle, who won several matches. As for the blue dogs most of them are sought out today by those who want them for appearance. I have even heard it said that all blue dogs stem from staff blood. Being of the skeptical nature, I tend to doubt that fact. One of the best dogs I ever saw was a blue dog and his brother in a Las Vegas convention. They were both talented and game, but I was never able to ascertain their breeding-but they certainly seemed to have no staff blood in them. Besides, the staff standard calls for black nose, so I doubt that would be the source of blue dogs. In truth, there are probably a multitude of sources as it seems to be a simple mendelien trait. Readers may be assured to learn that Heinzl once informed me that the last Stratton he knew was African-American gentleman who had a strain of blue dogs. Again, he didn’t know the breeding on them, but Howard said they were as game a line as he had ever seen. And Howard was tough to please! People with little experience are quick to denounce Barney and the blue dogs. I would suggest a little caution in that respect. Barney may have not been the greatest dog of his time, but he beat some really good dogs. And not all blue dogs are alike.