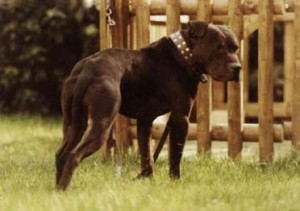 In the late 1980’s a dogman called Cune, from Serbia, imported a dog sired by Van Herpen’s Ace and

out of Garlaunis’ Susy from Holland. His registered name was Garlaunis’ Rambo, but he was generally

Nobody knows for sure how many fights he won, but his most memorable was when he won over the famous Radonjic’s Jumbo ROM in 50 when Jumbi was picked up and made a game courtesy scratch. After defeating Jumbo, he had become a very popular stud and was bred to several bitches while in the yard of Cune. Let’s take a look at some of his most known offsprings. When Iron Kid was bred to Bijeljina Boys’ Lola ROM they produced Zelenovic’s Cobra ROM, 2W, 1L. Goscak’s Rita (Ch Yellow Tom x Art’s Sister Haidi) was bred to Iron Kid and they produced Sole’s Ch Black Jack who won three, all under 30 before he fought Miki’s Pluton to a draw in 4:10 at 9 years of age. Iron Kid was also bred to Timotije’s Tea, an inbred Country Boys female. From that litter came out Ritter Kennels’ Inka ROM who produced Ritter Kennels’ Ch Sweet Becky, Krik Kennels’ Ch Krik and Bingo Kennels’ Gr Ch Boogie Boy. 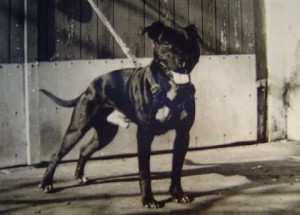 Some time later, Kid was sold to K.Kovacs from Hungary where he was also bred to a solid number of bithces and produced his share of good and bad ones as well. Back in those days, you could find pups sired by Iron Kid literally on every street corner. The blood, however, lost some of its popularity after the nine year old Kid lost to Jevuczo’s Alligator. Many people still confuse Cune’s Iron Kid with Savich’s Ch Iron Kid. Let’s clear this up. Savich’ Ch Iron Kid, also known as Gadji, was out of Cune’s Iron Kid and Radonjic’s Missy and won seven straight at a weight between 47,3 and 51,7 lbs for Oleg Guliakov in Russia. After his 38 won over Ablizin’s Homer Jr, a son of Patrick’s Homer ROM, Gadji was purchased by Victor Savich and spent his last years peacefully on his yard. Savich’s Ch Iron Kid also proved to be a good producer, even better than his sire. He produced such outstanding dogs as Gr Ch Skirz, Ch Ray, Ch Kinto, Ch Rambo, Ch Shket, Ch Gina. There is no doubt that Iron Kid’s impact on the game – either we are talking of Cune’s Iron Kid or Savich’ Ch Iron Kid – has been significant and will be felt for many years to come.