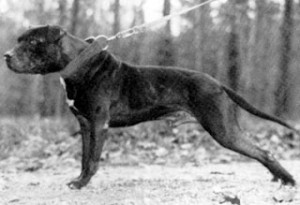 Chinaman was born on the yard of R. Abernathy on November 29, 1977. He was one of three pups born to Abernathy’s Molly and sired by Wood’s Trouble. Molly always seemed to have 3 pups. This time there was Chinaman, Boy and a female who would be named Onyx Lady (who went to the owner of Trouble, Dr. Wood). Boy would end up in the hands of G. Wright, where he would win three matches. Chinaman was raised by R. Abernathy and when he came of age he was placed with Dr. Wood to find out what he was made of.After a short stay, Dr. Wood shipped Chinaman to Vince and Bob in California to make up for an earlier prospect he had sold them that failed to live up to expectations. He arrived full of hookworms and roundworms and weighed only 42 lbs., 4 lbs. below his eventual best match weight of 46 lbs. Bob kept him on a long cable run and tried to help him overcome his emaciated state. Chinaman thanked him by biting him, so Bob shipped him to Vince. It was love at first sight. Vince wormed Chinaman and scheduled a roll for him. 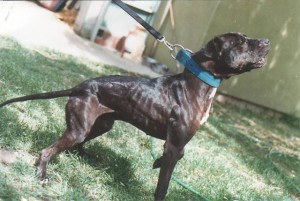 After a 3-hour drive Chinaman was nauseated and dehydrated. He was pitted 10 lbs. uphill against a powerful red dog named Ch. Caesar who proceeded to mop the floor with him. When the big dog tired, Chinaman went to the stifles and punched very hard. Even though he was still nauseated and underweight he came up from the bottom to bite down and stop Caesar at: 28.Chinaman’s next roll was into Doc, a highly respected wrecker. If he could hang with Doc for even 10 minutes, Chinaman would be worth a bet. Doc came out hard and slammed Chinaman into the corner and tried to trade with Chinaman. Big mistake! Chinaman hit the gut and killed the Doctor in his own living room in 17 minutes! It was clear Chinaman was something special.For his first two matches, Chinaman was hooked into respected head dogs that some expected to weather the storm and challenge the killing stifle and gut dog. Like their predecessors, neither lasted to the half-hour mark with Chinaman. For his third, a match was made with the highly renowned Gray’s Hubcap who had dispatched the famous Red Danger dog in a classic 2-hour encounter. Vince and Bob traveled 7 hours with their dog and when they arrived, odds of 5-1 were being offered against Chinaman. The betting line changed dramatically after the dogs were released. Chinaman drove Hubcap into the corner on his back and this is where the match ended 18 minutes later. Hubcap was a memory and Chinaman was proclaimed a champion and best in show.Suddenly no one had a 45-46 lb. male. Respectable dog men avoided him like the plague. Finally, when he was 7 years old, some determined fellows bought an expert head dog from R. Jackson, just to take out the aging Ch Chinaman. The dog from Jackson showed a lot of ability, but it wasn’t enough to keep out an athlete of Chinaman’s caliber. Chinaman worked past his defenses and curred him out in 38 minutes. This had been Chinaman’s longest match, but the outcome was the same as always: he destroyed everything in his path.For all who witnessed his matches, Chinaman became known as one of the roughest ever and a true finisher. According to scientific tests, he had the air of a greyhound. According to all who saw him, he had the mouth of an alligator. He was very clever. He would outsmart slick ear and nose dogs and cur them out. He would finish straight-ahead dogs even faster. Swapping-out was his game. Like all the truly great ones, Chinaman’s build was like a sleek, muscular thoroughbred.The Chinaman name appears in many of today’s pedigrees. His contribution as a producer equals, or exceeds his dominance as a performer. Among his better known offspring were Ch. Eightball, Ch. Cotton, Ch. Chinabuck, Ch. Chinagirl, Ch. Stormy, Ch. Missy, Ch. Chinarose, Ch. Ninja and Ch. Crock. He had three sons (Brodt’s Boar, Cottingham’s Cotton, and Shockley’s Header) go over the 3-hour mark on the same weekend! Perhaps his greatest contribution is as a producer of producers, as his son Frisco ROM has produced more champions and grand champions than any other living stud. 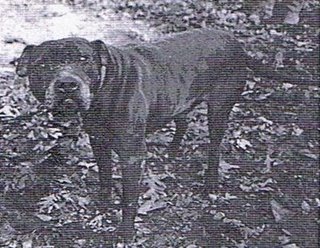 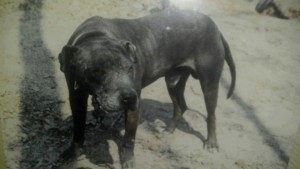 The LegendNote: Since this article was written Garner’s Frisco ROM has gone on to surpass Garrett’s Ch. Jeep ROM as the greatest producer in history of the American Pit Bull Terrier