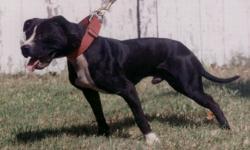 Two eye was sired by mtn mans bandit bred to ch bolero. He was the runt of the litter born blind in one eye and cloudy eye in the right eye. he got the name two eyes because my son said that was the only thing he would never have. He was a normal pup though he never let fact he was blind make him look or act like any other good dog.  At 18 months he was schooled as he started young and was talented and needed little practice to know what he was bred for, the pit.
First show was into over the hill’s kennel cowboy, he was a two time winner. at the start of the match two eyes didn’t start. I knew why I had bred him back secretly to his mother 2 times the week before the show, cowboy ran over and two eyes thought it was more sex, wrong and he got his ass kicked for 15 minutes. Soon he got his act together and by the hour mark he was way out front and over the hill’s Keith asked if I would scratch to win. I agreed and we sperarted the dogs with sticks. the referee an inexperienced boy by the name of Brian debow was holding the stick and standing about 10 feet to my right. I am holding two eyes preparing to let go on release. The one “side” rule when we matched two eyes that was made was complete silence when he scratched as he was blind. Well the ref told us to face the dogs ans I did, as I the ref drops the sticks on the floor and two eyes runs to the sticks I grab him back over the line and the crowd goes wild yelling ” FOUL”. Well it wasn’t a foul the referee dropped the sticks. So at that point I just let him go he ran over to the other dog and the fight starts back up. Over the Hill’s whines oh that’s a foul , I said “fuck you, if you want to continue this by scratch and turn and watch your dog die, fine, if you want to pick up your dog fine, other wise sit back and watch the execution.” They offered me another scratch to win, I knew he would go, I took the offer, made the ref set the sticks down on the floor outside the box before the scratch and two eyes flew across the box to win number 1. 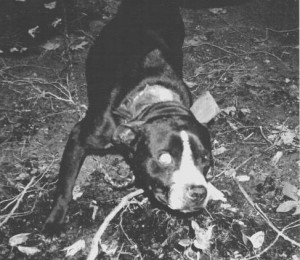 Number 2 was in October 1994, the night I matched 3 dogs that I bred. First match was Ch Chomper into bloodliners Ch Jimmy. Chomper was a good solid dog by Frisco and Bolero, he won that night in 51 minutes and became a gr ch, he later lost showing not to be game, but he was a real power house and those five wins were over 5 good dogs, including otter’s ch tonka bear jr, but that darn 6th dog was better. Also that night DLC & Deny’s Bo went for his second, he beat a champion named Turbine Jr that night from 3D kennels, Bo went on to become a Gr Ch and in his quest he beat Hargroves; Ch Tank and Scrimshaw’s Ch Brute. This same night Two eyes went into Bloodliners Ch Rocco and this was a battle royal. The first 20 minutes it was rocco on top holding eyes out by the head and wouldn’t let him get a hold of anything, by 30 minutes rocco started to wear down and two eyes was getting into the mouth, rocco mounted a come back and by 1:15 he had two eyes down and was way out front. Then at 1:20 two eye bit that dog in the shoulder and it sounded like a car door being slammed shut, he broke the dogs shoulder. Rocco was far from beat he came back up on three wheels and went to working the head again, Two eyes went into the mouth and another loud pop came and rocco turned and we got a handle. Rocco came like a bullet. Another handle and two eyes went at his regular nose in the air looking like ray Charles sniffing out pussy at a bar and makes the scratch in 4 seconds. Time now is 1:44 and bloodliners pick up rocco. Chomper won BIS and Two Eyes won his second GIS. 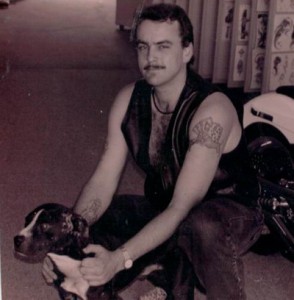 A few months later we had him hooked into school teachers gr ch shep but they forfieted, said their dog was sick. We then hooked him into Desert Warriors Ch Comanche and they too paid the forfeit when they said they wanted to move the weight to 37 not 36. I refused and collected the forfeit. Two Eyes was barely a 36, no were near a 37, he could actually go 35.
He went on to produce many good dogs and was a pleasure to own.