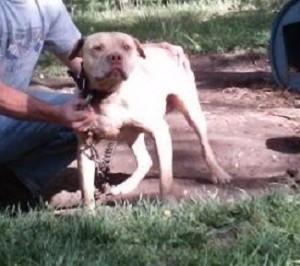 To give a quick recap from my previous articles, – Red Boy dogs have been sought out for the gameness that they have been well known for, however with that said a pure, or overly tight Red Boy dog does have its shortcomings and many of these will be addressed here in this article.

The Red Boy blood while contributing greatly to gameness in a line also has a reputation of producing a dumber than average dog, hence the term dumb game. This becomes more apparent when higher percentages of this bloodline are used. There is also another drawback to this line when bred tight and that is in the quality of mouth that these dogs will produce. Tight Red Boy breeding’s tend to produce dogs with average to below average bite. This is something that is an undesirable trait for those that are looking at being competitive in the world of fast lane competition. The quality of Red Boy dogs has also diminished as the years have gone on as a result of popularity. Many people today are using tight Red Boy stock that is not based on proven dogs, therefore the line in its pure form is not much better then it would have been 10 years back.So what is better than Red Boy? How can we avoid the mistakes of those that have only sought out gameness from this line? Today the best of this line was a result of a cross of the Jeep blood into the Red Boy line itself.At one time this would have been looked at as a cross, however today the Jeep/Red Boy line is so highly refined that it produces a dog that is as game as the Red Boy line, but without many of the negatives that have been attached to a tighter Red Boy dog.

So what is an ideal combination?
The Jeep/Red Boy dog is no longer a hybrid cross, but rather a combination of the best that these two lines have to offer. It has also been refined over the past 10 years now to produce a dog that is as game as a pure Red Boy dog would be, but without the high percentages of dumb, or soft mouthed dogs that the Red Boy line has been known to produce. Another benefit of the Jeep/Red Boy line was an increase in the quality of the overall dog. You now have a dog with an abundance of gameness, high ability, and a mouth that would rate in the average to above average range depending on the percentages of each bloodline used in its pure form. The Jeep/Red Boy line seems to offer the best that both lines have to offer in a 75/25 combination. That would be a 75% Jeep dog, with 25% of quality Red Boy blood. The higher the percentage of Red Boy in this mix brings down the quality of this line, as the undesirable traits of the Red Boy line will appear.
The first dog to truly break out and demonstrate the power of this combination was White’s Tab (ROM). Tab is a true 50% Jeep 50% Red Boy cross. Many of Tab’s first successes where dog that came as a result of breeding to Crenshaw’s Irene. Irene was a straight Jeep dog. The combination of Tab and Irene produced the first true tests of this theory. P. Rodriguez was one of the first to own a Tab x Irene dog and that dogs name was Gator. Gator made his championship into some of the best competition around in Rodriguez’s hands. Later due to some financial issues Ch. Gator was sold to  Crenshaw who brought out Gator for one more win into some of the finest that Mexico had to offer. The dog then became known as Crenshaw’s Ch. Gator. Gator was a true 75% Jeep 25% Red Boy cross. The story of Ch Gator starts in the deep south, born on the yard of A White he was soon sold to P. Rodriquez. He started his schooling at a young age & he was at the top of his class. Brought out for his first he simply over powered his opponent & won with ease in 39 minutes. Number two was hooked & he went in with a fury & it was over in 38 minutes.At this point his stud career was started & Rodriquez was looking for number three. Finally the date was set for the thrird show. As always Gator was a bear for work & his keep went perfect. He was in great shape & all was made ready for number three. This match would be for his championship all three within one year. The day came & the time drew near. When Gator was released the out come was never in doubt as he was on top all the way. Now in a 37 minutes he was Ch Gator.Many good bitches were bred to the little dog & it looked like he was quite a good producer of quality BULLDOGS. It looked like a great future for Ch Gator. But hard times fell on Rodriquez & he had to put his Ch Gator up for sale. Crenshaw was in the market for the dog, especially since he was a double grandson of the great Crenshaw’s Ch Jeep ROM. Crenshaw bought the dog & started looking for number four. Some thought that it was crazy to use Ch Gator again, but Crenshaw wanted to see for himself what the little dog was made of. The match was made into the four time winner Bellon’s Ch Chambooger, one that many said Ch Gator didn’t have a chance of beating. Well someone forgot to tell Ch Gator. His keep went well & the two year lay off didn’t seem to have too much effect on the little dog. The time was at hand & on the fly Ch Chambooger caught Ch Gator in the rear end, where he stayed doing of damage for the first twenty five minutes. Things didn’t look too good for Ch Gator, but he started to get a little rough on Ch Chambooger & the tide turned. Ch Gator got up and started to work on Ch Chambooger who got behind & didn’t like it. He was a whipped dog at 51 minutes. Gator came from behind to win a very tough match. I’ve heard a few critics of this little Ch Gator, some said he never should have took what he did against Ch Chambooger. I think you need to take into account something we call GAMENESS. He beat a four time winner that no other dog could stay with for even an hour. He never made a bad move & when he could he came to the top & gave as good as he got. Something we call GAMENESS!! Something that this little Champion knows all about.

Crenshaw’s Ch. Gator was not only a successful combination of the Jeep/Red Boy line, but also ushered in a new generation of dogs that would be based on this successful combination. Gator unfortunately did not live an overly long life, but during his time that he was at stud he proved that he could reproduce these qualities. Crenshaw’s Ch. Gator has since become an ROM producer. Another dog that is becoming quite well respected, as a producer is a brother to Ch. Gator named White’s K.A..His sire Tab (ROM) is now part of the history of this breed, but because of his advanced age he has not been popular as a stud dog over the past year or so, and questions remain about his current state of fertility.K.A. is without a doubt the best producing son of Tab (ROM) and Irene alive today. He is also a dog that has a significant number of highly respected offspring that are fast lane material in percentages that surpass that of his sire Tab (ROM) based on number of breeding’s. K.A. as mentioned above is solely owned by Pro Line Kennels. K.A. is not just a pretty pedigree dog. He’s a well-proven game dog that is producing a caliber of offspring that are of the highest quality that can compete and win against the best that the world of fast lane competition has to offer. Scratchliner Kennels recently became aware of this when they lost with one of their finer bitches to a daughter of K.A.. So what is an yet even better combination? It is another cross becoming well respected, that also comes from the likes of Mr. Crenshaw. That would be Jeep/Redboy/Rascal. CH Rascal, a great 8xw, 1xl. Rascal produced more good dogs than many recognized. With 9 Ch.’s and 1 Gr.Ch. to his credit, Ch.Rascal has had a major impact on the dogs of today. A brother to Wood’s Oso Negro and Boudreaux’Lupe, from P. CARVER’S BLACK SHINE bred to CARVER’S ORPHAN ANNIE II (2XW). Rascal bred dogs tend to produce dogs with average to above average bite, ruffness and excellent wrestling ability. Gene’s Lug POR is a great producing son of Jeep from Gene’s Honey a daughter of Rascal J.R. Rascal J.R., a very important factor in this line.
THIS DOG WAS THE BEST OF BOTH OF HIS PARENTS. HARD MOUTH, LOTS OF SMART’S AND DEEP GAME. When I say parents I mean CH Rascal and Creshaw’s CH Honeybunch (which we know is Jeep’s Dam also) making Rascal J.R. the key. Now, for those looking to get in on the ground floor of the purest that the Jeep/Redboy/Rascal line has to offer, you should look no further than Caldwell’s Dragon. Dragon was bred and is owned by Cold Steel Pits. He is a true son of CH Gator from
CH CRENSHAW’S MISS POLLY . Miss Polly is a daughter of Gene’s Lug from DUPREL’S SADIE. Sadie is a heavy bred Rascal bitch making Miss Polly 15 times the Classic P. CARVER’S BLACK SHINE and CARVER’S ORPHAN ANNIE II (2XW) breeding, making Dragon the complete Jeep/Redboy/Rascal line.
http://www.apbt.online-pedigrees.com/modules.php?name=Public&file=printPedigree&dog_id=110