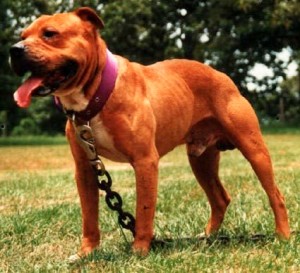 In 1990 The texas Iron Man Coy D. and a friend purchased some dogs from the yard of Joe Hoskins and Tony McCool. They left with some very good prospects and a 10 month old male, who was whelped in April of 1989, out of McCool’s Sack and Hoskin’s Betty Joe. Since the litter was out of Sack, who had quit in 1:42 against a good dog of Bo Well’s, for this reason the litter was not high on Mr. McCool’s list and wasn’t worth much to him. As a matter of fact, the whole litter of six was offered to L.G. for $300. The 10 month old male was sold for $100 and was called Banjo.

After a quick roll, at the age of 12 months, Banjo was then purchased by Coy from his friend for $150. At this time, The Texas Iron Man also returned to Hoskins and McCool’s yard to purchase three more litter mates of Banjo $100 each. Two of these yearlings were culled and one female was kept, her name was BB Red.
Still young, Banjo was matched into Wilson’s Wolfy at 45 lbs. Wolfy couldn’t scratch back. for number two, Banjo was matched into Anderson’s Slick and it was over in :29 minutes. For his championship, The Oklahoma Boys brought their 2X winner named Grunt, it took Banjo :33 minutes to diperse of the 35 lb. black dog, who couldn’t stand at that time and was believed to be dead. His fourth was into W. River’s Ch. Vito, who was picked up at :43 and made adead game courtesy scratch. For his fifth and grand championship, Banjo went into Raul’s 2X winner named Sonny Boy. It ended with Sonny Boy being picked up to save his life at :25. In an attempt to get Gr. Ch. Banjo matched once more, The Texas Iron Man and M.A.D. futilely petitioned R. Hall to use his Gr. Ch. Andy Capp in a battle of grand champions, unfortunately Mr. Hall declined these advances. 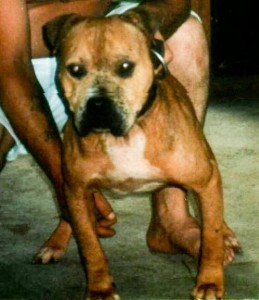 Banjo and his litter mate sister, BB Red, both made grand champions at the young age of three and a half years old, and became the first brother and sister, registered grand champions. Banjo went on to become a Register Of Merit before his death, while his sister died in the summer of 1996.
http://www.apbt.online-pedigrees.com/modules.php?name=Public&file=printPedigree&dog_id=90