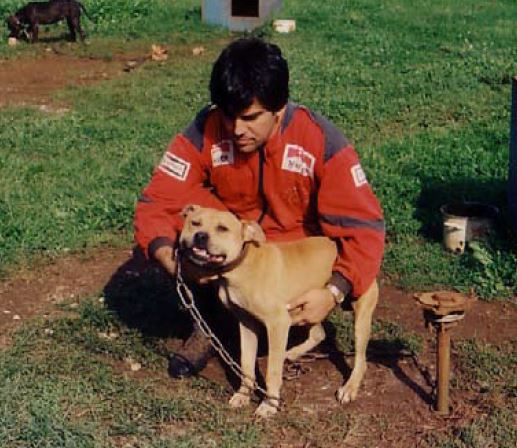 A LITTLE WARRIOR WITH A BIG HEART

Many years ago, in June of 1990 I was traveling in my little VW car from (Montenegro) to Zurich (Suisse) with Nera on board, a daughter of Auclair’s CH Tom. My intention was to breed her to Hall’s Joker, a 1xW which owner was Misa Cvetkovic who has bought the dog directly from Bobby Hall. Joker killed his opponent in 50 minutes and it was Rebel Knl’s Pieman 1xW wining before over Ken Allen’s Buch 4xW, a litter-mate brother to DBL GR CH Tornado.

When I saw Joker for the very first time, I was impressed by his muscles, because he was living in a flat. I’ve never seen such a strong back legs and it became perfectly clear to me why Hall
was talking that nobody could beat him in 22 kg. We didn’t have any problems to breed the dogs. We agreed that no puppy would be sold to anybody and that Misa would help me to raise them all. When Nera’s time was coming I brought her in my apartment and she started to whelp the 15 of August. From 14 to 23 o’clock. She brought forth 10 puppies and as I was satisfied with the number and vitality of the babied, so I went to bad very tired. The next day in the morning my friend Vesko came to see the puppies. I told him that there were 10 of them in the litter. As I was taking Nera out, Vesko was staying with puppies. And than when I was back, Vesko told me that there were 11 puppies. That eleventh yellow male puppy was half sized of his littermates which were quite of the same size. He had to strike hard because there was no breast for him any more. He hustled through a crowd suckled all the milk only with his little legs trying hard to survive. Vesko and I, we helped him to find a good breast to suckle and we just left this tiny little puppy in life. This morning he was the first with the name and Vesko and I called him Suvo because of his tiny appearance. (note: Suvo means “Tiny” in Serbian)

In the period of the first 12 days I have always helped him to suckle mother’s milk. When he finally opened his eyes he started to fight for his place in the litter, but he was always smaller that others. When they were about 3 moths old, I had to separate them. The very first to go on the chain was Suvo, because he was the biggest naughty boy. One day coming into my yard where all dogs were on chains, I found Suvo and one black male bleeding and spattered with mud. They were only 4 months old and the black one was somehow out of the chain and so he started to fight with Suvo. I cannot say the exact time of their fighting but both were lying down tired and entangled with the chain.

The black one was bigger than Suvo and I was thinking that Suvo was damaged also mentally because the black dog was tortured him. When we washed them tired and covered with the
blood and the mud and in the moment I was trying to take the soap from the hand of my friend who was washing the black one, Suvo took this advantage and grabbed the black one by nose. Than it just became clear to me that he was exceptional and outsized puppy and that the black one could not torture smaller Suvo.

I started to contact Suvo with other dogs in the pit when he was 12 moths old and than I was very disappointed understanding that Suvo had some problems with his heart and his breathing, his tongue was suddenly become blue and he just couldn’t breath. When he was 2 years old I decided to test him risking his death. I just didn’t want to breed him without proven him first; nevertheless he was my favorite pet in the yard together with CH Bela and CH Giroux. I was giving him a special food and walking him for 15 days.

Suvo just loved to fight. He went so hard with such a violence that he wanted to grab a shoulder and the back leg at the same time. He had solid bite, he was rough but he couldn’t go for a long time. After 30 minutes I put another dog in the pit and he kept fighting as he hasn’t even noticed that there was one different dog. After 45 minutes he just became blue, his eyes were red, his tongue out and down, he had a big breathing problems. He beaten further but he did not know where he was striking. He made 3 or 4 scratches as a bullet. In this time I usually took the dog 20m or 30m from the pit and to let the dog go. So, I did it also with Suvo. Outside the pit Vesko was staying with another dog and one meter away there was my wife. Suvo went in a pit direction and straight to my wife, because she was the only one he could see. When he was one meter in front of her, he just saw the dog on her left side and he went with his last atoms of power to the dog.

I took him to give an infusion and some heart medicines and I was really thinking that I could not save his life, and it was also not easily for me to listen my friend and my wife accusing me that I pushed him to hard. But a little warrior has shown also this time his desire to survive fighting for his place in the litter.

The first female bred to him was the daughter of Cuka out of CH Giroux and a sister of Suvo by name Gara. There were 5 puppies, 2 males and 3 females. One female died at the age of 2 moths, one male was ex GR CH Joker and the other one stayed by me but he was such a crazy dog that he jumped in a boiled water when he was 3 months old. One sister is known as Miss Suvo, and the third died in the age of 6-7 months. The second female bred to him was the double Giroux dog staying by Vuja. All puppies died, just one survived and she has one win in Sinj. By Banjo he bred the daughter of Gioroux and Yankee Shila. There were 4 puppies, 2 of them died in Czech Republic, one is in Vranje, and another staying by Banjo has one win and one loss in 2:00.

The next breeding was in Sabac, the pure snooty female and in this litter there were 3-4 puppies. He bred also Komnen’s female and produced 5 puppies, 2 males and 3 females. One male was 2xW and the best Suvo’s son. He stopped the best Captain’s dog in 0:50 in his second match, but he died in an accident. Than he was bred to Peca’s Mala and in this litter he gave GR CH Cela, Bager 2xW and one female 1xW in 2:30 death game. From this litter came out also Komany’s Ledi.

Than when staying by Vuja in Sopot, Suvo was suddenly missing. There were 2 versions of his missing: he got out of the chain and jus went because he was a bit crazy. Maybe he attacked
someone’s sheep or another dog and he was killed OR he was stolen by some guys from Belgrade, because they didn’t know that this was my dog. They rolled him and he died. When Novica started an investigation and to look after him with his people, it is also possible that they scared and killed him or just let him go. In one word, nobody heard anything about this little warrior of a big heart. He has never been bred again, but his descendants are recognized as his offspring from one kilometre away.