Sensei was sent to me as a pup 2 months old from the north, bred Ch RECOIL IMP ROM POR DOY 17 Over a Gr Ch Red Roman DOY 15. As a pup Sensei was full of energy and was on from about 4 months. I remember one day Magic and my self tried catching in nonsense by schooling 4x winner Maui DOY 2020 https://pedigree.gamedogs.cz/details.php?id=335363 at 6 months old little did we knew they were going to turn out good hunters. Few months went by after her schooling’s I decided to put her weight out 15.2 and just before her weight was taken she decided that she was not schooled enough she broke loose and ran into her elder sister Ch Evil and almost got killed. She got saved by my son mcdeuce who told later that Sensei had broke loose. 2 weeks after the incident her weight was contracted into a reputable camp who had a 1xW hard biting bitch called Nikki who had won her previous show by breaking her opponent’s legs. Come the night it wasn’t the dog I anticipated to be going into but her daughter named Tequila who stopped at 22min, she couldn’t handle the pressure and hard mouth that little midget Sensei brought to her. Pain and misery.

Sensei 1xW vs 101
Sensei had just come off her first win, which only lasted 22 min. This probably sparked something in GIWGD and he immediately put out his females weight at 15.1 kg. By his luck the weight was picked up by Bounty. Bounty never intended to use Sensei in this match as she just came from one, even though it was short order, he wanted her to mature first as she was only 18 months at the time. She however ended up in a yard accident with the one hooked for this show, she ended up wrecking this female. Bounty was between a rock and a hard place, pay the forfeit or get a replacement dog. Sensei just came off a match and was involved in a yard accident but was in much better shape compared to the other female. She had also whelped pups not long before he first show, quite a busy start to the year for the little gip. Paying forfeit was not an option and the decision was made that Sensei would be the replacement dog.

101 comes from a line of very gamedogs and it was said that her father has never produced a cur dog, be that in a show or roll. His kids were two for two, two matched and two of them became champs. Both of these dogs went over the 2 hour mark in their careers for a win. Her mother is an import from Swaziland but her pedigree compliments the fathers having similar dogs in their pedigrees. It was said that she outclassed many dogs in rolls even going uphill they could never catch her as her ability was second to none. D-day came and they would be the last on a three card show. Bounty had also won the previous show over a “Gr Ch Chaptes” dog with their “AK 2xW 1xGL POR” son. Gunner is handling Sensei and GIWGD is handling 101. Dogs are released and side bets are being called, 101’s handler states that will cover all side bets with the forfeit money he collected. He was clearly very confident in his dogs ability even with the odds stacked against her.

Dogs are released and they start at a very fast pace, handlers and the Ref had to constantly jump out of the way as they were gliding all over the pit. 101 is on defense and Sensei is the aggressor trying to catch 101, it was evident why 101’s handler was confident, she was on the head and making it very difficult for Sensei to catch anything. The crowd was also very pleased by what they were seeing, “oooohs and aaah’s” could be heared from different spectators the way 101 was jumping around the pit and shaking out her holds. Sensei gets in at times and when she does she makes it count, Gunner states that 101 is slowing down and that Sensei would start to catch her more often, this was the case but 101 never let up. Sensei would hit the chest and throat but is never allowed to stay in there too long. 101 at times also tried to go to the side of the neck but this was also short lived, Sensei started to get in more and more and increased the pressure, this was evident as 101 changed from her preferred head holds and went to working the muzzle.

At one point Sensei was working over 101 and she could not get her off, GIWGD second tells him to talk to 101 and encourage her but he says she is looking at him funny he would rather opt not to do that. The pressure was just to much for 101 to handle and she started to sing the fat lady’s song. She breaks free and tries to make a run for it but Sensei catches her, GIWGD calls a turn on his own dog and the Ref grants it. Handlers instructed to handle when dogs are out of holds. At this point 101 is just fighting to stay alive as the fight seemed to have left her body, tail between the legs. Handles are made and 101 is up to scratch and to the amazement of everyone she completes her scratch. Another handle is made and Sensei comes steam rolling out of her corner. They go at it and 101 tries to keep her at bay still, quick handles made and 101 is up to scratch. GIWGD ordered to release and 101 decides to turn around and hide behind his legs. She is counted out and Sensei is declared the winner in 32 min. Sensei is picked up and 101 seems like she wants to cross but allas its to late.

For championship there was a controversy on who who was the best 15.2 around between Sensei and Amber. This was almost a reputation of Gaza vs ch Piston where Bounty would meet full- 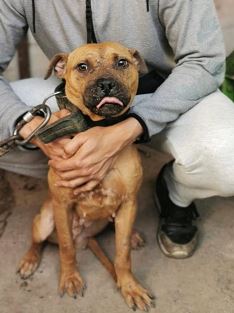 throttle. The night came it was a 2 card show with SENSEI going last. There were talks around the box of how Amber was going to brutalize little Sensei little did they know that they were in for a surprise with that dynamite. Ref orders the girls to be released with Sensei straight to the throat forcing her way into Amber’s defense, this went for some time, amber struggling to take Sensei of. After some time she finally took Sensei off by the muzzle giving hope to team Fully I called for bets that no one covered while Amber was looking fancy on that face. This didn’t go long until the little dynamite got angry and started applying more pressure like she had nitro on her legs to chase while biting Amber until a member of Ft camp threw a towel trying to save Amber from a pit kill as she was laying helplessly not moving I swear she was dead or at least met some angel at that point and time lol. Making Sensei a well deserved Champ in 32min.

Respect to those who were behind her career, Gunners, Magic, Dc, Eddy the number 1 fan.