THE ORIGIN OF THE BULL TERRIER – Ed Maguire 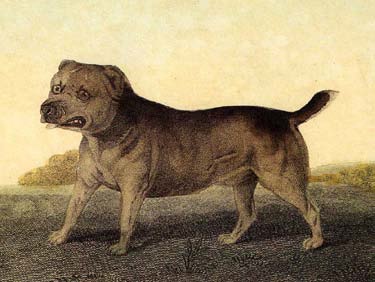 THE ORIGIN OF THE BULL TERRIER

The Bull Terrier is a breed sufficiently modern, to leave no doubt as to its derivation. In the first quarter of the ninteenth century, attention was being directed to the improvement of the Terriers throughout England and Ireland. New types were sought. The sporting men of that time, who patronized the prize ring and the cock pit, desired to produce a dog which could do something more than kill rats and unearth the Fox, for, at that time the terrier was used in rat-killing contests.

Jimmy Shaw’s Jako could finish sixty rats in three minutes; and on one occasion at Manchester, England, made a record of killing one thousand in a little over an hour. Now a dog was wanted combining all the dash and gameness of the Terrier, but with the heart, courage and fighting instinct of the Bull Dog, so the Terier and Bull Dog were crossed. A large type of the Terrier was chosen, the large smooth-coated black and tan, also the
early English white Terrier, a small dog only weighing about fourteen pounds, but noted for its gameness. This cross breed gave the fanciers the dog they had been looking for: a determined vermin killer, and interped fighter, upon which skill and the pit wagers were freely placed. However, the animal was neither a true Terrier nor a true Bull Dog, but served his purpose and was highly valued for his gameness. It is a matter of record, that in 1806, Lord Camelford owned one of these types, for which he paid the very high price of eighty-four guineas, and which he presented to Champion Belcher, the great pugilist. This dog was featured in the Sporting Magazines of the time. He was a shortlegged, thick-set, fawn-colored specimen with closely cropped ears and a broad, blunt, muzzle. This kind of a dog continued throughout England and Ireland for many years and was known as the Bull and Terrier. Gradually the Bull Dog element, at first pronounced, was reduced by careful breeding, which eliminated the undershot jaw and bench legs of the English Bull Dog, and produced a type with sharpened head and long straight limbs. The Terrier characteristics were, maintained so that little of the Bull Dog resemblance remained, except the fearless, fighting spirit.

In the past strains the Bull Terrier was much marked with fawn, brindle and black. About sixty years ago, a strain of pure white Pit dogs were bred by James Hinks, a well, known dog man of that day, and to whom we are indebted to for the fine type of Bull Terrier we have today. The advent of the Hinke strain in 1862, brought the short-faced dog into disrepute. The best dogs of that time weighed between twelve and thirtyfour pounds.

A great dog of that time was Nelson, twenty- one pounds, who killed twenty-eight dogs in the pit. Hink’s Dick, Old Dutch, and Madman were some other great dogs of the time. Ireland turned out some of the best Pit dogs known. The Irish dogs were mostly brindle and buckskin. Some believed the Irish strain of dogs to be gamer than the dogs bred in England, and imported some very good ones to this country from Ireland to fight some glorious battles.

Among these were such dogs as: Bloom’s Black and Tan. Harry Jenning’s Bowler, Tutley’s Joe, Jack Brown’s Peter, Jim Corcoran’s Terry, The Gas House Dog. The Blind Dog, Burke’s Spring, and others which carried the blood of Irish champions. Jenning’s Bowler fought Sabine’s Billie in Chicago, one of the. most noted battles which took place in America. (See New York Clipper of Feb. 1866) Pete Kerwin lost $10,000 on this battle
and William Bulshaw, stake holder, held $30,000 stake money. At the pit side were such notables as Dan Noble, Hank Worth, Dutch Frank, Tom Darby, Joe Slater of Boston, the notorious Rodger Plant and others. Cockney Charlie at that time imported Pilot, Paddy and others. Pilot whipped Crib. The late John P. Burke bred and fought some very wonderful game dogs, Old man Colby, Noonan, Casey, Farmer Brothers and others helped to
keep them to the standard. Of late years it would appear that there is loose breeding since so many dogs quit fighting inside of an hour. Years ago it was nothing to see a battle last around three or four hours. Now a good many owners use the Journals to fight their dogs, but seldom get them into a pit. Game dogs are scarce, but there are some men who have them, so the man, who is a fancier should be very careful about his breeding strain, and he will then have a better right to look for gameness in his dog than the fellow who breeds otherwise.