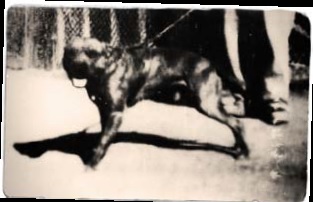 Dogs are our most beloved animals—and with good reason, too. They are our surrogate children. A lot of people love their dogs more than their children. I don’t condemn them for that. Children can be ungrateful and bratty. I happen to like kids, but I understand people that don’t. The truth is that a lot of people should not have children, and most people shouldn’t own Bulldogs. But I digress.

As much as the general public loves dogs, it is understandable that they simply can’t believe that anyone who would allow his dog to be in a staged fight could possibly love that dog, but it happens to be true. In the main, the general public doesn’t know that there is a different class of dog lovers. That group includes owners and breeders of show dogs, hunting dogs, and herding dogs, to mention just a few. To these people the dogs are not so much a member of the family as they are prized animals. They are still loved, but it’s not quite the same. In fact, field trial Labrador Retrievers are sent to trainers, not only for their training, but also for the trainer to enter them in the field trials and handle them during such trials. And they are usually boarded at the trainer’s facilities in order for him to have daily access for training. The proud owners are much like race horse owners. They revere the animal, but it’s not quite the same as a house pet.

I think it is these types of owners with which pit dog people should be compared. Some pit dog men are like hound men. They revere and love the dogs, but they wouldn’t think of having them in the house. That varies though, as I have known both hound men and pit dog men who kept a dog of their respective breeds as a house pet. Sometimes either of these respective owners can express a belief that these animals aren’t really happy in the house. I recall with some amusement that Leo Kinard kept trail hounds and occasionally hunted with them. You had to look for the hounds to find them, though, as there was just a small contingent of about six of them chained in their own areas—far far away from around 200 Bulldogs! Leo could afford to keep that many dogs, and he even had a couple of guys hired full time to care for the dogs. Invariably, these helpers became dog enthusiasts themselves. Sometimes, like Leo, they liked hunting with the hounds, but, also like Leo, their most fervent passion was reserved for Bulldogs. (How could it be otherwise?)

Leo was a good dog man who knew a lot about dogs, but I remember his expressing amazement about anyone keeping a Bulldog as a pet. Back in those days, most people kept the dogs for fighting or breeding. There is a lot of talk about how Bulldogs were once the most popular breed in America. I don’t know where that comes from, as they were never to my knowledge popular as pets—even though they made perfectly fine pets. The problem was that, even in my youth, dogs generally ran loose, so having a Bulldog was a particular problem. You had to keep the dogs confined in some way, and when you took them out, you had to keep them on leash and be aware of all the loose dogs. There was generally little worry about any dog attacking your Bulldog, no matter how small he was. Any possible attacker seemed to sense somehow that this was not your average dog. The love a pit dog man has for his dogs is a little different from what people with house pets feel, where the dogs are actually part of the family . . . often the favorite part of the family—but that usually goes unsaid! However, I have more than once heard a dog man proclaim that the closest bond that you could have with a dog was to condition him for a match. I can see what they mean. A trainer has to spend a considerable part of every day with the dog, and he is providing the dog with the types of activities that Bulldogs love: activities that normally include treadmill work, roadwork, working a flirt pole, and possibly even swimming. And there is the rubdown. There may be disagreement about the benefits of the rubdown, but it is pleasurable to the dog, and it helps to strengthen the bond between man and dog.

There is no denying that the dog is the one who puts his life on the line, but it isn’t the big risk that the general public believes. Trainers get closer to some dogs than others, but it seems obvious that any trainer worth his salt has to have a feeling for dogs, and as such, he is inclined to become emotionally attached to the animal.

There was a time that a dog man could ask a veterinarian for advice in regard to his dog with full honesty of what the dog was being trained for. Also, the dog could be taken to the vet after a match—and it was not unheard of to actually have the vet attend. The too-little-remembered S. W. Hubbard used to regularly bring a veterinarian to matches as a paid attendant. I suppose it was with the best of intentions that humane groups lobbied for laws that prevented vets from that type of activity and to even require them to report any dog that they suspected of having been in a staged fight. I wonder if those who pushed that kind of legislation had any idea of how much worse they made things for the dogs. Now, it is incumbent upon pit dog men to learn in great detail how to take care of dogs after a match. To their credit, many have done so, and they have developed impressive skills at caring for dogs that have been through a long and grueling match. I have often seen setups that looked very much like MASH units. Not all dog men learn such advanced veterinary skills, but the responsible ones do—although there was a time when dog men especially skilled in such skills were available at nearly every match. These guys were highly prized, and I have even seen good dog men help an opponent with doctoring his dog after the match. That always struck me as great sportsmanship, as well as showing a regard for a dog other than your own.

I have often mentioned that I am the bete noire of humaniacs, even though I have written books on other breeds. That situation has developed because I have committed the unpardonable sin of defending pit dog men. Or as they like to call them, “dog fighters.” That sounds worse, and it makes it sound as though the people are forcing the dogs to fight. Anyway, they are pretty unhappy about my defending the indefensible—even if they don’t know anything about what they are condemning! I thought I was mainly telling the truth about the pit dog game, and one reason for that was that the humaniacs had so misrepresented it. They had told stories about how the dogs were forced to fight by using whips and cattle prods on them—as if such a thing would work anyway! They also told about how pit dog men were always on the lookout for “bait animals,” anything from a kitten to a dog. I wonder if those humaniacs ever considered that their stories, which got wide play in the media, would actually encourage some of those very things among neophytes who didn’t know any better. My main frustration was that so many lies were being told. I wanted to set the record straight—not that it did much good—and I was willing to defend pit dog men because I so admired the dogs. I knew enough about dogs
to know that they wouldn’t be that way without someone at least rolling them to know which were the best ones to breed. So I certainly wasn’t going to denounce the source of the dogs that I valued so much.

I’m still frustrated by the humaniacs’ failure to make an honest case. I think I could do it. It wouldn’t sound as salacious, but it would stand up to scrutiny. After all, dogs do get hurt, and sometimes they die. It might even be argued that it is immoral to breed the dogs to enjoy fighting contact. It would be difficult for me to build the case, but I could do it and do it honestly.

It is easy to condemn staged dog fights, and almost everyone who knows nothing about it will most certainly agree with you. Yet, these same people have their own vices, not recognized as such. They love American football, for one thing. I’m guilty, too, as I like it and even played it in high school. I remember with amusement that Bob Costas was asked if the public knew about the damage that was being done to the players by football. He replied, “They know, and they don’t care. They want their football.” These objectors would be quick to say that humans have a choice—but I can assure them that the best of football players lacks the
desire of the ordinary Bulldog by a country mile! As someone who has been particularly interested in biology, I have hobnobbed with some fairly famous biologists, and I have been struck by the fact that many of them are
quite bitter about the human species because of the damage that has been done to other species. (In this case, we are talking about habitat destruction that has been brought about by our ever expanding numbers.) While equally appalled by the damage done to other species, I can help having a certain admiration for our species. We have been bold enough to try to learn something about every aspect of our universe, and we’ve been pretty successful at it. So I like my fellow humans, including even the humaniacs.

I certainly like dogs, too, of all breeds—I really do! But, unfortunately, there is just nothing like a Bulldog to me. I suppose that is why my books on other breeds seem halfhearted, while the Bulldog books simply crackle with enthusiasm.