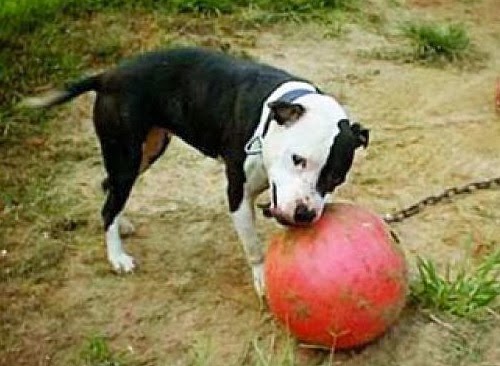 Pandi’s sire was the immortal, Stricktly Business’ CH Chino R.O.M., who also produced R.B.B.’s CH Pie Face 4xw, Size Up’s CH Heffa, and Strickly Busi­ness’ CH Conrad. As for Pandi, she’s is rather a shy bitch who is really finicky about the methods of condi­tioning she ’ll undergo, as she would never run a slat or carpet mill, nor would she run a jenny. And quite frankly, her future as being a match dog was questioned because of that fact, coupled with the sometimes spooky demean­or that she displays. However, once an opponent would make contact with Pandi, or bite her, that action would cause a reaction that would awaken the “Sleeping Giant”, and cause an unexplainable transformation, and almost certainly whatever it was that interrupted the sleep, would surely pay dearly. After a while, it was realized that Pandi would tirelessly chase after basketballs. So, her condition­ing was focused around a simple game of fetch. And in doing so, she would always come in on weight, and in top condition. For her 1st, she was hooked at 31 lbs. into Tri-State Kennels’ Red with Pit Bull Dynasty in the mid­dle. This one turned out to be Pandi’s longest match, as it took her a few minutes to get started, and a bit longer to het where she wanted to be. But once she found her way to Red’s chest, Tri-State quickly picked up their bitch at the 37 mark. For her 2nd, she was hooked at 30,5 lbs. into Biohazard Kennels ’ Candy with Strickly Business in the middle. And it was this one, where Pandi was nick­named “Devil Dawg”, as no one there in attendance had ever witnessed such a brutal chest-dog. So, not only did Candy lose the match, but she also lost her life, all in a matter of 18 minutes! For her 3rd, she was hooked at 31 lbs. into Cash Money’s Little Hoochie. This time 2nd to None was in the middle. And again, Pandi lived up to her reputation, as she launched into Little Hoochie’s chest, and put her away

permanently, in a mere 25 minutes. Af­terwards, the tales of the “Devil Dawg” quickly spread throughout the circuit, as J. Damager was anxiously try­ing to get her hooked for her match. Calls were made from coast to coast, but for one reason or another, none of the big names, and big reputation dogs at her weight was available. And for a while, J. Damager thought he wouldn’t be able to get her going again, until a call came in from Mardi Gras Kennels who had quickly built up a name for themselves by going into, and winning over highly-regarded champions. And in days, arrangements were made to hook CH Pandi into Mardi Gras Kennels’ Black Girl at 31 lbs. with Boot Camp click in the mid­dle. This match was to be part of one hell-of-a-show as Cash Moey’s CH Gunner won his 3rd. that night over Strickly Business’ Buster Brown Jr. 2xw and Boot Camp Click’s CH Fire won her 3rd over R.C. & Slick Ray’s Red 2xw. Also on the 2-night extravaganza, Trap Jaw Kennels’ Cookie Monster won her 1st over Tha Rouge Boys’ Wi­nona 2xw and Tha Rough Boys’ CH Audry won her 5th. over R.B.B. ’s CH Pearl. As for the CH Pandi vs Black Girl meeting, it went pretty much like the others, as CH Pani rooted so deep into Black Girl’s chest, all you could literally see was her tail wagging in excitement, as dark-red blood shot out of Black Girl’s chest, as high as 10 ft. in the air! This lasted all of 18 minutes, and when the smoke cleared, Black Girl was gone. Many attempts to hook CH Pandi for a match were made, but it seemed as if no one wanted any part of her. She remained open to the world for one year after, and throughout that entire time, there were no takers. Soon after her retirement, she was bred to Comin Hard’s Gotti 2xw, R.O.M., and out of that litter came Blood Bond’s CH Pandora 4xw, and J. Damager’s Pandi II, 2xw. Her next litter was sired by Strickly Busi­ness’ CH Chisum, and out of that litter came Strickly Business’ Hummer 1xw. CH Pandi whelped two other lit­ters, both were sired by her son, J. Damager’s Toby, who’s a litter-mate to CH Pandora 4xw and Pandi II, 2xw.