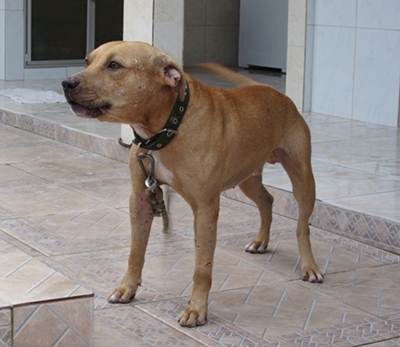 Grand Champion Muamba was born on my yard as the result of the breeding between Caos & Pro Team’s Fluzão and Caos & Pro Team’s Sugar, both good dogs. Fluzaõ lost his first without any kind of conditiong. He went straight off the chain and lost in 58 minutes. Sugar was a bad ass bitch as well! I had a friend called Careca, who is out of dogs for a while, but many years ago he came to my kennel and bought Muamba as a puppy. He was the one who raised, conditioned, handled and managed Muamba in his first three matches. His first outing was against Strike Kennels’ Troller and he won in 48 minutes. For his second they traveled to Belem and beat Seu Ita Kennels’ Peralta, a one time winner in 29 minutes. Muamba’s championship was against Taionny Guerron, another one time winner – the match was part of the São Luis Convention – and he won in one hour.

After Mumba’s third Careca – his owner – unfortunately passed away and one of his friend – Pedro of Best Kennels – bought Muamba and off they went to the Maraba Convention where they beat MacBoy, a one time winner in 1:09. Muamba won his grand championship in a big show – part of the Fortaleza Convention – over the one time winner Gameness Forever Kennels’ Bong Bong, a very game and rough Bolio bred dog. Muamba worked hard on Bong Bong’s muzzle and finished his job in 1:11 and became a Grand Champion. He was also awarded Dog Of The Year 2014 in Brazil. Muamba was a dog that loved to work HARD on the head and muzzle. It was an honor to play a part in his success! Many thanks to my good friend Careca for the great job he did with Muamba and Pedro for continuing what Careca started!