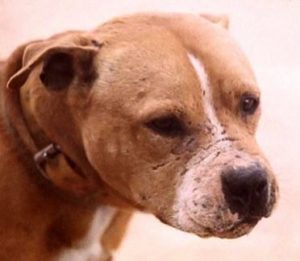 I WAS A FORTUNATE MAN INDEED TO HAVE OWNED AND CAMPAIGNED GRAND CHAMPION BADGER AND CHAMPION FOX AND OWNED 1/2 INTEREST IN THEIR ONE TIME WINNING LITTER SISTER LUMPY. SO MUCH HAS BEEN WRITTEN ABOUT THEM AND THEIR FAMOUS LITTER MATES THAT I THOUGHT AS A FINAL TRIBUTE TO BADGER AND FOX, I’D RELIVE WHAT I BElIEVE TO BE THE MOST EXCITING CONTEST OF EACH OF THEM

After Fox won his first one in short order, I wanted him to be truly tested. I sat down with Buckshot and asked him to find me a real tough one. It was my intention to retire Fox and use him at stud. I’d campaign Badger, as he had the harder mouth. But I wanted Fox to win a hard, tough one before I put him up. Buckshot got me hooked at 38 lbs. into Chavez and his Grip dog, a son of the famous Pig dog. I was told he was a real punisher and that I probably wouldn’t win. I took Amigo along as my second. He told me he had every penny he and his kids could scrape together to bet on Fox, and that he hadn’t paid the light bill for the month. Fox weighed 371/2 lbs. was in good shape and as always, I was confident that he would take what was dished out and finish them in the end. His style was offense, he was brutal in the shoulder and stifles, but even more so in the armpit. He never fought out of control, he used his head and was real smart. I also felt lucky that night because we were in the same pit where my Grand Champion Bad Billy dog had beaten Champion Black Sabbath. Buckshot referred. The dogs were released and Grip buried himself in Fox’s chest. From where I was it seemed like he stayed there forever. Fox would be on his feet, Grip in his chest. Fox on his back, Grip in his chest, at about the 30 minute mark Grip was slamming Fox into the pit wall, still in his chest. By the 50 minute mark I was starting to lose hope. Buckshot asked me if it was tough enough? I told him he had done too good a job finding me one. I was pretty sure Fox was game enough to take a killing and it looked like he would. Amigo called out a $400.00 bet on Fox and it was snapped up fast. I couldn’t believe he had bet at that point. I decided I better try to get Fox to his feet so Amigo could pay his light bill. I started talking constantly to Fox and he finally got to his feet, and was fighting back a little. Grip was getting tired and Fox started driving for his shoulder. Fox got him down and drove hard into his armpit. With Grip on his back, Fox started tugging hard at him. It was his favorite hold and I felt now we could win if Fox had enough left. I didn’t know were Fox found the strength, but he kept the punishment up in both armpits, then he went to the throat. Grip turned, we got a handle, and I was praying he wouldn’t come. Fox was trying to get to him, but felt to me like he on his way down. I held him up in the corner. When we faced our dogs, I knew it was over. Grip was facing us, but his eyes were looking off in the distance. Grip was counted out at 1:05, and Fox made a good courtesy scratch considering the shape he was in. Amigo and I rushed Fox to the truck and started working on him. 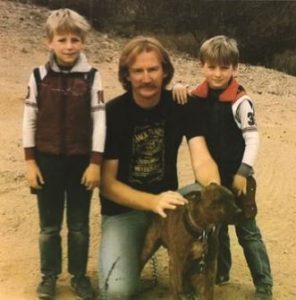 An old one of my good friend T.L. with his sons and Champion Fox

I asked Amigo why he had bet on Fox when it looked like he was dying? He told me that he thought I was losing hope and he wanted me to know that he was betting everything he had that Fox would pull it out. I was afraid that Fox wouldn’t make it as his chest and throat were in real bad shape. I got him stabilized and drove home as quick as I could. I laid Fox on my living room floor, in front of the T.V. and next to the couch. For seven days, I laid next to him. I’d rub and massage him from head to toe until he would fall asleep, then wake and do it again. I even had my wife bring me my food, so I wouldn’t have to leave him. I believe that Fox’ ultimate gameness was that he lived, and then went on to become a Champion. I think I now know where Fox’s strength came from. It was there with him the day he was born. Badger had five contests, and each one has been written about and talked about at length. I believe the most exciting one was his championship match. There was a lot of talk that my dogs were doing pretty well out west but wouldn’t hang with the dogs down south. lt didn’t make sense to me because my line included dogs from Florida, Alabama, and Texas as well as Arizona and California.

I put Badger’s weight out at Traxlers pit in Mississippi. It was one of the best going. Badger got matched into Cox’ Bloody Billy, a two time winner, so both were going for their Championship. I had bought Bad Billy and Reuben from Cox and we talked about how we really didn’t want to go into each other. He told me it was a shame I had come so far to lose, because Bloody Billy was the best he’d ever owned. Neither of Bloody Billy’s opponents had made it. I told Cox I wasn’t coming that far intending to lose, but if I did we’d still go to dinner. I flew to New Orleans and took a car to Mississippi. Badger got sick on the flight and his kennel was full of vomit. I was a bit worried. About nine of my friends came from across the country, and met me there. We were nine among five hundred. Within minutes of getting to the hotel every cent we had was covered. I bevieve they would have taken all we could have raked up. I spoke with Cox and he told me which ever dog won would be the best 34 lbs. dog that ever lived. We had a great talk and wished each other luck. I was feeling real sick and went to bed. lt turned out I had pneumonia. I told Red that if I died during the night, to handle Badger and win for me. There were 8 dogs from 8 different states at the convention. One match went over 3 hrs, and Uncle Bud won his Championship that night. Badger went first. Both he and Bloody Billy came in at 331/2 lbs. Buckshot came to referee. When we released them Badger grabbed Bloody Billy in the chest, in the throat, in the shoulder, and then deep in the stifle. Badger’s only defense was offense. He never stayed in one hold too long but damaged everything he got hold of. The crowd was pretty quiet. Whenever Bloody Billy would get the nose, the crowd would come alive. But in a few seconds Badger would be hammering him again.

I knew at the 10 minute mark that it was all over. Bloody Billy looked like a sack of oatmeal. Badger had been driving hard for about 30 minutes,when he stopped to catch his breath. The crowd came alive one last time. After 5 seconds Badger was back in the guts. Bloody Billy was counted out at 53. He fell forward and was trying to lift his head. He sure was a good one. Badger courtesy scratched, Bloody Billy was picked up before he could hit him. Just outside Bloody Billy was gone. Badger was voted Best In Show, and I was the proudest man in Mississippi. Cox told me Badger had shamed him, but I told him he had nothing to be ashamed of. I’m glad Badger won ,but I still am sorry that we had to go into each other. Over the years people asked me to roll Badger and Fox together. I never would, many have asked me who I think would have won. I’ve always said that Badger had the style that might beat Fox, and Fox had the style that might beat Badger. I always thought that if my two sons were Dempsey and Marciano, I’d never want one to beat the other. I guess it’s fitting that Badger and Fox both died at 12 years old, less than a month apart. I think about them a lot. But believe it or not, most of my thoughts aren’t about the contests. I can see my little daughter Andy when she was 3 or 4, walking around with me everyday as I fed the dogs. We had to stop at Badger so she could get up on the house to play with him awhile. You see, Badger was Andy’s house dog Patches, husband. One of their baby’s grew up to be my Blake dog. When I pass the tree that Fox lived under, the same spot where his father Reuben lived, I remember Fox foaming as he licked his shade board because he had no teeth left to tear it apart. Across the yard is a daughter of Fox bred to a son of Badger, and I realize that almost every dog on the place has Badger, Fox Reuben, and Bad Billy in them. When people mention a family of dogs, thats what they mean.

These dogs are part of my family, and a family unto themselves. Thanks God I was smart enough to have some Badger and Fox sperm frozen, so that their best sons may not have even been born yet. I was a fortunate man indeed to have fed, held, loved, and fought Grand Champion Badger and Champion Fox.